A large-scale seafloor survey off the European coast has found widespread presence of bottles, plastic bags, fishing nets, and other types of human litter at all sample locations, according to results published April 30, 2014, in the open access journal PLOS ONE by Christopher Pham from University of the Azores and colleagues from 15 other institutions.

Marine litter throughout the ocean has been documented and known to cause problems for marine mammals and fish when mistaken for food and eaten, or else when it entangles coral and fish—a process known as "ghost fishing." However, high cost and variations in sampling methods currently limit scientists' ability to survey litter on the ocean floor in hopes of obtaining a comprehensive analysis. To better understand the extent and composition of marine litter off the coast of Europe, scientists analyzed nearly 600 seafloor transects over 10 years from 32 sites across the Atlantic and Arctic Oceans and in the Mediterranean Sea, at depths ranging from 35 meters to 4.5 kilometers. Scientists used photos, videos, and trawling to survey or collect seafloor litter. They classified the litter into six categories, including plastic, fishing gear, metal, glass, clinker, and other.

Litter was found at all surveyed locations, ranging from coastal seas to the Mid-Atlantic Ridge, 2000 kilometers from land. Litter was also found at all depths, from shallow, 35-meter waters in the Gulf of Lion to 4500-meter waters in Cascais Canyon, Portugal. The highest litter density occurs in submarine canyons, whilst the lowest density can be found on continental shelves and on ocean ridges. Plastics accounted for 41% of litter and derelict fishing gear 34%. Glass, metal, wood, paper, cardboard, clothing, pottery, and unidentified materials were also observed. The authors hope these results highlight the extent of ocean litter and the need for action to prevent increasing accumulation of litter in marine environments. 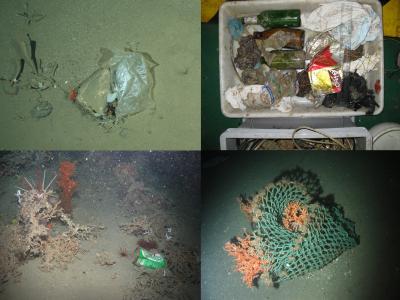 This shows plastic, glass, cans, fishing gear on the seafloor of European Waters.

Co-author Dr. Kerry Howell said "This survey has shown that human litter is present in all marine habitats, from beaches to the most remote and deepest parts of the oceans. Most of the deep sea remains unexplored by humans, and these are our first visits to many of these sites, but we were shocked to find that our rubbish has got there before us."

Christopher Pham added, "The large quantity of litter reaching the deep ocean floor is a major issue worldwide. Our results highlight the extent of the problem and the need for action to prevent increasing accumulation of litter in marine environments."