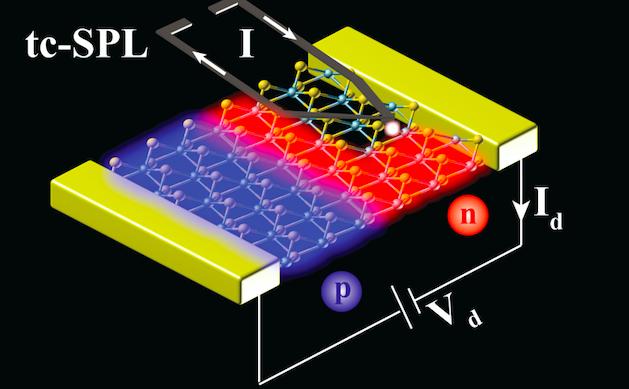 image: The apex of the scanning probe, heated by flowing current (I), is "Etch-a-Sketching" on a 2D semiconductor MoS2, realizing the state-of-the-art p-n nano-junctions on this 0.65 nm-thick atomic layer.

BROOKLYN, New York, Monday, July 27, 2020 - Fascinating opportunities are emerging from a new class of materials named two-dimensional (2D) semiconductors, which are only one atom thick. 2D materials are poised to have a bright future in the electronics and optoelectronics industry, as well as in Internet of Things devices. Any cell phone, computer, electronic device, and even solar cells, are all composed of the same basic electronic building block, the diode. Unfortunately, a major obstacle for the wide application of 2D materials in industry is the unsolved challenge of the scalable and robust nanofabrication of the core element of a diode, which is a "p-n junction".

To produce "p-n junctions", it is necessary to dope a semiconductor in such a way that part of it is n-doped (doped with an excess number of electrons) and another part is p-doped (doped with an excess number of positively-charged "holes"). Riedo and Davood Shahrjerdy, professor of electrical and computer engineering at NYU Tandon, showed that by combining t-SPL with defects nanoengineering was possible to obtain nanoscale-resolution bipolar doping of MoS2, yielding to both n-type and p-type conduction, which can be readily extended to other 2D semiconductors.

As part of the research, the team integrated t-SPL -- using a probe heated above 200 degrees Celsius -- with a flow-through reactive gas cell to achieve a unique nanoscale control of the local thermal activation of defects in monolayer MoS2. The defective patterns can give rise to either p- or n-type conductivity on demand, depending on the gasses used during the local heating process. Doping and defects formation mechanisms are elucidated at the molecular level by means of X-Ray photoelectron spectroscopy, transmission electron microscopy, and density functional theory.

"In our previous research we showed that t-SPL outperforms electron beam lithography and other standard methods for fabricating metal electrodes on MoS2, an advance that could also decrease the cost of fabrication since t-SPL does not require markers or vacuum," said Riedo.

With this consecutive success in bipolar doping of 2D semiconductors, t-SPL is now able to offer both dopants patterning and chip manufacturing, which will rapidly advance the material science and chip design. "It is great to see how t-SPL is now taking up to enable the fabrication of functional transistor devices from 2D materials, including control of the doping levels" said Armin Knoll, from IBM Zurich, one of the pioneers together with Riedo of t-SPL.