New research from the Niels Bohr Institute shows that cement made with waste ash from sugar production is stronger than ordinary cement. The research shows that the ash helps to bind water in the cement so that it is stronger, can withstand higher pressure and crumbles less. At the same time, energy is saved and pollution from cement production is reduced. The results are published in the scientific journal, Scientific Reports.

Cement is comprised of chalk and clay, which are mixed together and heated at high temperatures in a cement kiln. The mixture is then crushed into a powder. When the cement powder is mixed with water a chemical process takes place, which causes the cement mixture to harden. Cement is used as a building material throughout the world.

In some countries where sugar cane is grown, agricultural waste product from sugar production has been added to the cement mixture for many years. Once the sugar has been extracted from the sugar can you are left with a lot of fibre waste, which is used as fuel for energy production. From the energy production you get a lot of ash, which needs to be disposed of. In some countries, like Cuba and Brazil, the ash is added into cement mixtures.

"I have been studying cement using quasi-elastic neutron scattering for several years and researchers from Brazil asked whether I wanted to analyse samples of cement mixed with waste products in the form of sugar cane ash. I decided to say yes to the project, which aimed to investigate the properties on a nano-scale and map the mobility of water in the cement. The quality and strength of cement is directly related to how much of the water is chemically bonded. The more the water can move around, the worse it is for the strength and durability," explains Heloisa Bordallo, who does research in nanophysics at the Niels Bohr Institute at the University of Copenhagen.

Heloisa Bordallo was sent a number of cement samples from Brazil. The samples contained varying amounts of ash from sugar can production. Their innermost dynamics were then examined. This took place at the ISIS facility in the UK. The samples were placed in an instrument where they were bombarded by neutrons.

"Using neutron scattering, we can see how the water inside the sample moves. Neutrons are shot into the sample and when neutrons hit the water's hydrogen atoms, they interact and the neutrons scatter and are picked up by the detectors. We repeat this for several hours and by analysing the data we can determine how the water inside the sample is moving and also determine its local environment," explains Johan Jacobsen, who performed the experiments as part of his thesis for the graduate programme in physics at the Niels Bohr Institute.

The experiments showed that the cement mixed with approx. 20 percent ash had good properties. The water the cement pores was bound to the ash and moved around less. This explains why the ash cement is stronger, can withstand higher pressure and will crumble less. 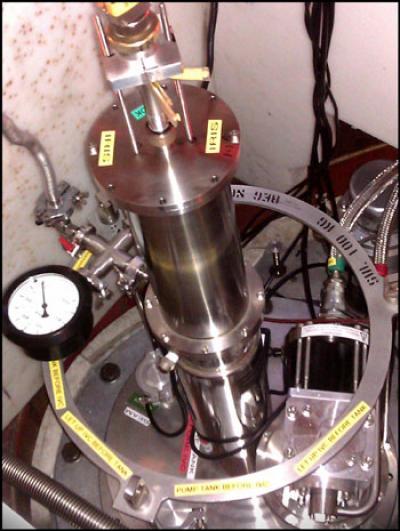 The IRIS instrument is viewed from above. The cement sample is lowered about 120 cm into a cryostat so that it is hit by the neutron beam. The cryostat is emptied of air to avoid signal noise from air.

Ash cement has been used for many years, but only locally. Now it could have great potential.

"The cement industry is huge and if they are to adopt a new idea, they need to have proof that it works. Using quasi-elastic neutron scattering we have now studied cement mixed with ash and shown what is happening and why it is stronger. Cement production uses a lot of energy and emits large amounts of CO2, because it needs to be heated up to very high temperatures. Cement production accounts for 5 percent of global CO2 emissions. If you replace 20 percent of the content with ash, you are saving both CO2 emissions and raw materials, as you use 20 percent less by utilizing a waste product like ash," says Heloisa Bordallo. 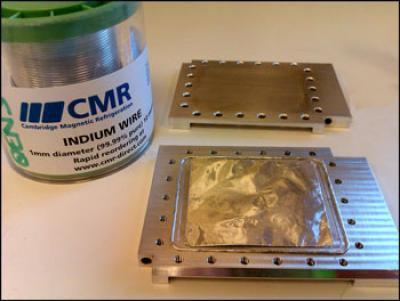 The cement powder is packaged in aluminum foil and placed in a sample holder. The sample holder is sealed tight with indium wire and 22 screw.