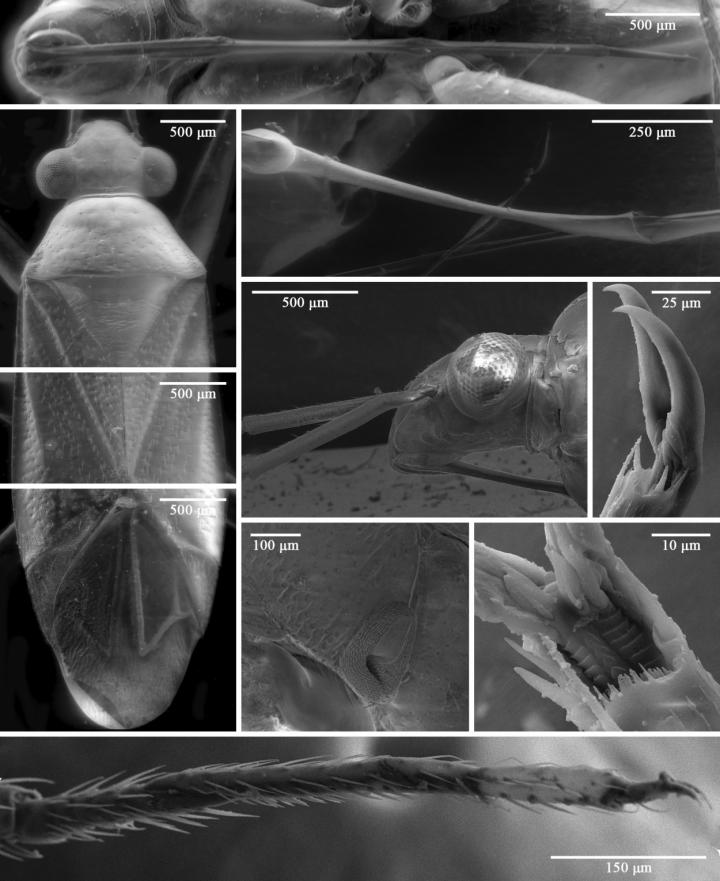 The Heteroptera are a large group of insects. However, not all of its representatives are widely known as true bugs. For example, it includes a pond water strider (Gerris lacustris), which is very common in Russia. 'Most often, when it comes to these insects, people imagine blood-sucking bed bugs. They bring the rest of the bugs into disrepute, but most of these insects do not bite. The bug we discovered belongs to the plant bugs (Miridae) and it also does not feed on human blood,' says Veronica Tyts, the first author of the research, a first-year master's student in the biology programme at St Petersburg University.

Borneo, also known as Kalimantan, is the third-largest island in the world. About 1% of the island's territory is occupied by the state of Brunei Darussalam where Ulu Temburong National Park is located. Its tropical forests remain practically intact and preserve an amazing variety of flora and fauna. Here Claas Damken, a research participant from Jalan Universiti, Brunei Darussalam, Brunei, collected the Heteroptera, which were later sent to Anna Namyatova, the second author, for identification.

'This collection included very important samples for us. Within the large family of the Miridae, there is a subfamily that I specialise in. Most of its representatives are extremely rare in different collections. The fact is that in nature they live in the forest floor and have a cryptic lifestyle. At the same time, the sample from Brunei turned out to be relatively large: nine specimens are representing the monotypic new genus Tatupa. Monotypic means that only one species belongs to it - Tatupa grafei. It is highly probable that the bug is endemic, that is, it does not live anywhere except the island of Borneo,' says Veronica Tyts.

Tatupa grafei belongs to the relatively small Rhinocylapus-complex, currently comprising 24 species. Its representatives vary in colour and have huge antennae, often twice longer than a body. The Tatupa grafei bug is golden and spotted. It is noteworthy that in the Rhinocylapus-complex, sexual dimorphism is very common: the male can be half the size of the female. Before copulation, the males sit on the back of the female and 'ride' it for some time.

'At the same time, the males and females of Tatupa grafei are the same size. Their body length, without antennae, is approximately five millimetres. Of course, there is a compelling question: why one part of the group is characterised by sexual dimorphism, while the other does not. In the future, we would like to find an answer to it as well,' notes Veronika Tyts.

Most aspects of the behaviour of the Tatupa grafei bugs are unknown due to the extremely small number of its representatives. These insects are often found on fungi growing on rotten wood. Because of this, it has been suggested that these bugs feed on fungi, but whether this is true remains to be explored. It is also possible that Tatupa grafei eats smaller insects, which feed on fungi. The third version is that the bug menu can be mixed and consist of both fungi and insects. The answers to these questions can be given by observing Tatupa grafei bugs in a natural environment, but it is pretty tricky to carry it out.

The genus name Tatupa is a random combination of letters. The scientists could not come up with a suitable name for it for a long time. It was important that no animal has the same name. Additionally, the scientists needed to find out if the word Tatupa exists in any languages and what it means. It turned out that there was only one hit on the Internet - in an episode of a Polish television game where its participants are busy coining new words. The species is named after the Brunei professor Ulmar Grafe, who had provided significant support to the scientists.

'The planet's biodiversity is a great treasure that we, unfortunately, are constantly losing. It is important to find and describe new types of living organisms to preserve them - if not in their natural habitat, then at least in the vast knowledge database created by mankind. Moreover, each of these creatures has a specific role in the global ecosystem. And the more ramified the connections in it, the higher its stability. Therefore, the small bug we discovered may play a significant role in the ecosystem of the island of Borneo,' says Veronica Tyts.

Alongside Veronica Tyts, Fedor Konstantinov, Candidate of Biology and Associate Professor of the Department of Entomology at St Petersburg University, took part in the discovery and description of Tatupa grafei. Other authors of the research were: the already mentioned Claas Damken; Anna Namyatova, a senior research associate at the All-Russian Research Institute of Plant Protection; and Rodzay A. Wahab, a lecturer at Jalan Universiti, Brunei Darussalam, Brunei.

Colour photographs of Tatupa grafei were taken at the Department of Entomology of St Petersburg University using a camera attached to a stereo microscope. The rest of the images were created using a scanning electron microscope of the resource centres of the Research Park of St Petersburg University 'The Centre for Molecular and Cell Technologies' and 'The Centre for Microscopy and Microanalysis'. Aleksei Miroliubov, a centre engineer, rendered significant assistance to the scientists.

The authors of the publication are currently continuing the research, which will result in a long paper on the phylogeny of rare bugs from the Rhinocylapus-complex. The researchers plan to build a phylogenetic tree that will reflect the probable evolutionary relationships of organisms. To achieve this, a morphological analysis of insects and an analysis of their DNA markers have been carried out. As for the specimens, seven of the nine provided specimens will return to their homeland in Brunei, while the other two will remain in the large collection of the Zoological Institute of the Russian Academy of Sciences.