Effects of TM practice on trait anxiety: A meta-analysis of randomized controlled trials

A new meta-analysis published today in the Journal of Alternative and Complementary Medicine (2013;19(10):1-12)1 found the Transcendental Meditation® technique (TM) has a large effect on reducing trait anxiety for people with high anxiety. Trait anxiety is a measure of how anxious a person usually is, as opposed to state anxiety, which refers to how anxious we are at the moment. A meta-analysis is an objective means to draw conclusions from all the research in a field.

This meta-analysis covered 16 randomized-controlled trials, the gold standard in medical research, and included 1295 subjects from various walks of life, age groups, and life situations. TM was compared with various control groups, including treatment-as-usual, individual and group psychotherapy, and various relaxation techniques. Studies on high stress groups, such as veterans suffering from PTSD and prison inmates, showed dramatic reductions in anxiety from TM practice, whereas studies of groups with only moderately elevated anxiety levels, such as normal adults and college students, showed more modest changes.

Lead author on the meta-analysis, Dr. David Orme-Johnson, an independent research consultant, commented: "It makes sense that if you are not anxious to begin with, that TM practice is not going to reduce your anxiety that much. Groups with elevated anxiety received significant relief from TM, and that reduction occurred rapidly in the first few weeks of practice."

TM was also found to produce significant improvements in other areas worsened by anxiety, such as blood pressure, insomnia, emotional numbness, family problems, employment status, and drug and alcohol abuse. 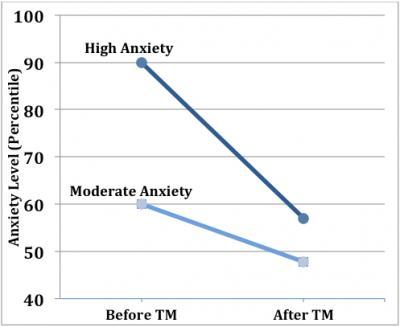 Co-author Dr. Vernon Barnes of the Georgia Prevention Center, Georgia Regents University, Augusta, Georgia explains what happens with control groups in these studies. "Control groups who received usual treatment did not show dramatic reductions in anxiety. In fact, control groups that were highly anxious to begin with, if anything, tended to become more anxious over time."

When asked about the effect of other approaches to reduce anxiety, he added, "However, progressive muscle relaxation was also effective in reducing anxiety. But, it did not have the other side benefits of TM, such as increasing overall mental health, and increasing the rate of recovery of the physiology from stressors."

Dr. Orme-Johnson answered a commonly asked question about placebo effects. He said: "Since anxiety is a self-reported measure, one might wonder whether the effects of TM practice or any other treatment program were a placebo effect. Placebos are great. If you give a person a sugar pill and tell them that it will reduce anxiety, it probably will, but only for a little while before the effect wears off. But the effects of TM were shown to be lasting and include objective benefits. For example a recent study showed that TM reduces heart attacks, strokes, and death over a ten-year period. So we know its effects are real and are not just due to a placebo."

The meta-analysis also examined the issue of bias with TM studies on anxiety. There was no evidence of missing studies and studies conducted by scientists who were in any way associated with Maharishi University of Management or any of its sister universities did not have stronger effects than research conducted at independent universities.

Two previous meta-analyses on TM have found that it is highly effective in reducing trait anxiety, and is more effective than other meditation and relaxation techniques, including mindfulness meditation.2,3