On the edge between science and art: Historical biodiversity data from Japanese 'gyotaku' 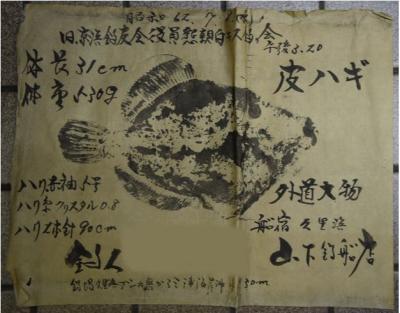 Historical biodiversity data is being obtained from museum specimens, literature, classic monographs and old photographs, yet those sources can be damaged, lost or not completely adequate. That brings us to the need of finding additional, even if non-traditional, sources.

Biodiversity observations are made not only by researchers, but also by citizens, though rather often these data are poorly documented or not publicly accessible. Nowadays, this type of data can be found mostly with online citizen science projects resources.

In Japan many recreational fishers have recorded their memorable catches as 'gyotaku':魚拓, which means fish impression or fish rubbing in English. 'Gyotaku' is made directly from the fish specimen and usually includes information such as sampling date and locality, the name of the fisherman, its witnesses, the fish species (frequently its local name), and fishing tackle used. This art has existed since the last Edo period. Currently, the oldest 'gyotaku' material is the collection of the Tsuruoka City Library made in 1839.

Traditionally, 'gyotaku' is printed by using black writing ink, but over the last decades colour versions of 'gyotaku' have become better developed and they are now used for art and educational purposes. Though, the colour prints are made just for the means of art and rarely include specimen data, sampling locality and date.

In the sense of modern technological progress, it's getting rarer and rarer that people are using 'gyotaku' to save their "fishing impressions". The number of personally managed fishing-related shops is decreasing and the number of original 'gyotaku' prints and recreational fishermen might start to decrease not before long.

Smartphones and photo cameras are significantly reducing the amount of produced 'gyotaku', while the data from the old art pieces are in danger of either getting lost or diminished in private collections. That's why the research on existing 'gyotaku' as a data source is required.

A Japanese research team, led by Mr. Yusuke Miyazaki, has conducted multiple surveys among recreational fishing shops in different regions of Japan in order to understand if 'gyotaku' information is available within all the territory of the country, including latitudinal limits (from subarctic to subtropical regions) and gather historical biodiversity data from it.

In total, 261 'gyotaku' rubbings with 325 printed individual specimens were found among the targeted shops and these data were integrated to the 'gyotaku' database. Distributional data about a total of 235 individuals were obtained within the study.

The observed species compositions reflected the biogeography of the regions and can be representative enough to identify rare Red-listed species in particular areas. Some of the studied species are listed as endangered in national and prefectural Red Lists which prohibits the capture, holding, receiving and giving off, and other interactions with the species without the prefectural governor's permission. Given the rarity of these threatened species in some regions, 'gyotaku' are probably important vouchers for estimating historical population status and factors of decline or extinction.

"Overall, the species composition displayed in the 'gyotaku' approximately reflected the fish faunas of each biogeographic region. We suggest
that Japanese recreational fishers may be continuing to use the 'gyotaku' method in addition to digital photography to record their memorable catches", concludes author of the research, Mr. Yusuke Miyazaki.