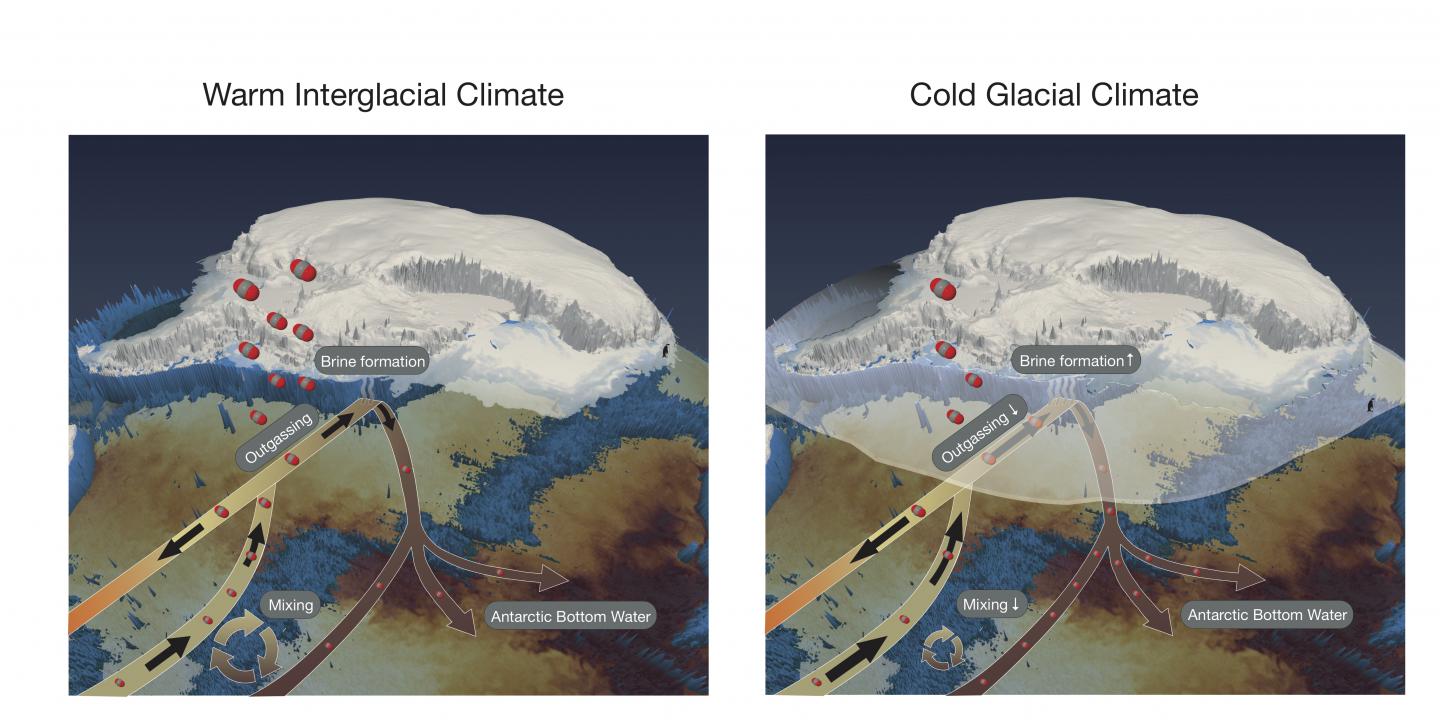 IMAGE: North-South ocean currents are shown at different depths in the ocean, with their strength and direction indicated by the arrows. The density of the water increases with depth, from low...

During past glacial periods the earth was about 6ºC colder and the Northern hemisphere continents were covered by ice sheets up to 4 kilometers thick. However, the earth would not have been so cold, nor the ice sheets so immense, if it were not for the effects of sea ice on the other side of planet.

This is the conclusion of a study published this week in the Proceedings of the National Academy of Sciences of the United States of America by a team of scientists from the IBS Center for Climate Physics (ICCP) in Busan, South Korea and the University of Hawaii at Manoa, in Honolulu, HI, USA. In the study, the scientists investigated what role sea ice (frozen ocean water) in the Southern Ocean surrounding Antartica played in past climate transitions. They found that under glacial conditions sea ice not only inhibits outgassing of carbon dioxide from the surface ocean to the atmosphere, but it also increases storage of carbon in the deep ocean. These processes lock away extra carbon in the ocean that would otherwise escape to the atmosphere as CO2, warm the planet, and reduce glacial amplitudes.

We know from air bubbles trapped in ice cores that the concentration of carbon dioxide in the atmosphere during cold glacial periods was 80-100 parts per million (ppm) lower than the pre-industrial levels (280 ppm). Because the ice sheets also reduced the amount of carbon stored on land, the missing carbon must have been stored away in the ocean. It remained unclear for many decades what processes were responsible for this massive reorganization of the global carbon cycle during glacial periods, but scientists suspected that the Southern Ocean likely played an important role, due to two unique features. First, the densest, and therefore deepest type of water in the ocean are formed near Antarctica, appropriately named "Antarctic Bottom Water". Second, it is the only place where deep ocean waters can move freely to the surface due to the action of winds. As a result, "Processes that occur on the surface in the Southern Ocean have a profound effect on the deep ocean and the amount of carbon that is stored there," explains Dr. Karl Stein, ICCP scientist and lead author of the study.

In turn, changes in the extent of sea ice in the Southern Ocean impact the carbon storage through both deep water formation and interaction with upwelling water. Sea ice contains very little salt, so when ocean water freezes into ice the leftover water is an extremely salty brine. This cold, salty water is very dense, sinking to the ocean bottom and forming Antarctic bottom water. As the climate gets colder, more sea ice formation occurs and more brine and heavier bottom waters are formed. The sea ice eventually grows under glacial conditions until it covers a large portion of the Southern Ocean. This means that the water upwelling from the deep ocean reaches the surface under sea ice. "Deep ocean waters store large amounts of carbon, so prior to large scale fossil fuel burning, the water upwelling in the Southern Ocean was a source of carbon to the atmosphere," explains Dr. Eun Young Kwon, Associate Project Lead of ICCP and co-author of the study. She adds, "If sea ice covered the area of upwelling waters under glacial conditions, it could act as a lid to the outgassing of carbon dioxide".

To investigate the physical effects of sea ice on the ocean, the team used a climate computer model to conduct simulations that covered the last 784,000 years of Earth's climate history, encompassing the last eight glacial cycles. "The model experiment is unique because previous studies only covered a single period in time, typically the Last Glacial Maximum snapshot 21,000 years ago, or used models that were too simple to capture these Southern Ocean processes" says Tobias Friedrich, co-author of the study. "This allowed us for the first time to look at the timing of the sea ice impacts, in addition to assessing their magnitude." The team used a separate model for the carbon cycle to quantify the impacts of sea ice and ocean circulation changes on atmospheric carbon dioxide.

Their results show that sea ice has the largest impact on carbon storage via the formation of Antarctic Bottom Water, driving a 30 ppm drawdown of atmospheric CO2. "The increased sea ice formation during glacial periods causes an increase in the density difference between the bottom water and the water above," says Dr. Axel Timmermann, co-author of the study and ICCP Director. "The larger the difference in density between two waters masses, the more difficult it is to mix them." The reduced mixing means more carbon can be stored in the deep ocean. Importantly, this process is related to the creation of sea ice in the Southern Ocean, which can occur early within a glacial cycle. Later in the glacial cycle, the sea ice covers a large enough area of the Southern Ocean that it can "cap" the carbon dioxide outgassing from the upwelling water, causing a further 10ppm reduction of the level in the atmosphere.

"The results show that Southern Ocean sea ice can respond quickly to the climate cooling, strongly amplifying glacial cycles," says Karl Stein. However, much more work needs to be done before the glacial climate-carbon cycle puzzle is complete. "We still don't know how the initial cooling and reduction of atmospheric carbon gets triggered, but we think it is related to the growth of the ice sheets in the Northern Hemisphere and the corresponding changes in ocean salinity", explains Axel Timmermann.