Early life stress can leave lasting impacts on the brain

MADISON, Wis. — For children, stress can go a long way. A little bit provides a platform for learning, adapting and coping. But a lot of it — chronic, toxic stress like poverty, neglect and physical abuse — can have lasting negative impacts.

A team of University of Wisconsin-Madison researchers recently showed these kinds of stressors, experienced in early life, might be changing the parts of developing children's brains responsible for learning, memory and the processing of stress and emotion. These changes may be tied to negative impacts on behavior, health, employment and even the choice of romantic partners later in life.

The study, published in the journal Biological Psychiatry, could be important for public policy leaders, economists and epidemiologists, among others, says study lead author and recent UW Ph.D. graduate Jamie Hanson.

"We haven't really understood why things that happen when you're 2, 3, 4 years old stay with you and have a lasting impact," says Seth Pollak, co-leader of the study and UW-Madison professor of psychology.

Yet, early life stress has been tied before to depression, anxiety, heart disease, cancer, and a lack of educational and employment success, says Pollak, who is also director of the UW Waisman Center's Child Emotion Research Laboratory.

"Given how costly these early stressful experiences are for society … unless we understand what part of the brain is affected, we won't be able to tailor something to do about it," he says.

For the study, the team recruited 128 children around age 12 who had experienced either physical abuse, neglect early in life or came from low socioeconomic status households. 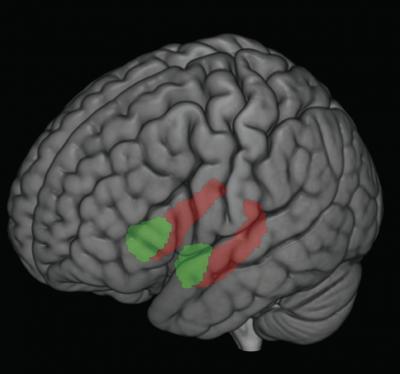 Different forms of early life stress, such as child maltreatment or poverty, impacted the size of two important brain regions: the hippocampus (shown in red) and amygdala (shown in green), according to new University of Wisconsin&#8211Madison research. Children who experienced such stress had small amygdalae and hippocampai, which was related to behavioral problems in these same individuals.

Researchers conducted extensive interviews with the children and their caregivers, documenting behavioral problems and their cumulative life stress. They also took images of the children's brains, focusing on the hippocampus and amygdala, which are involved in emotion and stress processing. They were compared to similar children from middle-class households who had not been maltreated.

Hanson and the team outlined by hand each child's hippocampus and amygdala and calculated their volumes. Both structures are very small, especially in children (the word amygdala is Greek for almond, reflecting its size and shape in adults), and Hanson and Pollak say the automated software measurements from other studies may be prone to error.

Indeed, their hand measurements found that children who experienced any of the three types of early life stress had smaller amygdalas than children who had not. Children from low socioeconomic status households and children who had been physically abused also had smaller hippocampal volumes. Putting the same images through automated software showed no effects.

Why early life stress may lead to smaller brain structures is unknown, says Hanson, now a postdoctoral researcher at Duke University's Laboratory for NeuroGenetics, but a smaller hippocampus is a demonstrated risk factor for negative outcomes. The amygdala is much less understood and future work will focus on the significance of these volume changes.

"For me, it's an important reminder that as a society we need to attend to the types of experiences children are having," Pollak says. "We are shaping the people these individuals will become."

But the findings, Hanson and Pollak say, are just markers for neurobiological change; a display of the robustness of the human brain, the flexibility of human biology. They aren't a crystal ball to be used to see the future.

"Just because it's in the brain doesn't mean it's destiny," says Hanson.