ANN ARBOR, Mich. – Preventing a stroke by placing a stent in the carotid artery, a major artery of the head and neck, is a procedure that's skyrocketing in the United States, but the outcomes can be deadly if older patients are not in the right hands.

Older patients receiving carotid artery stenting from lesser experienced physicians had an increased risk of death 30 days after stent placement, according to a study published today in the Journal of the American Medical Association.

An analysis of Medicare data showed a higher death risk if the stent was inserted by a doctor who performed less than six procedures a year, of if the procedure was conducted early in the physician's career.

Carotid stenting is increasingly being used to treat severe carotid atherosclerosis, an important cause of ischemic stroke. Since approval of the first carotid stent system by the U.S. Food and Drug Administration in 2004, use of carotid stenting has more than doubled in Medicare beneficiaries.

Despite the promise of this procedure, its increasing use has raised potential concerns.

"The total number of operators currently performing carotid stenting in routine clinical practice and their overall experiences and outcomes with the procedure remain largely unknown," he says. 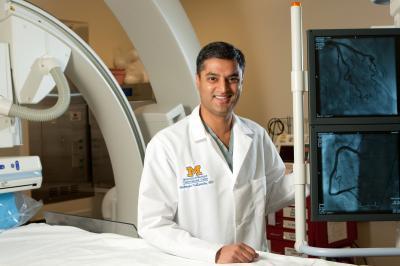 Nallamothu and colleagues at the U-M Health System, Mayo Clinic, Dartmouth-Hitchcock Medical Center, and Yale University School of Medicine conducted a study to examine recent patterns of utilization and outcomes for carotid stenting in the U.S. among elderly patients.

The researchers used administrative data from fee-for-service Medicare beneficiaries ages 65 years or older who underwent carotid stenting between 2005 and 2007. Among the outcomes the researchers measured were 30-day mortality and treatment early vs. late during an operator's experience.

Analysis of the data identified 24,701 patients who underwent carotid stenting by 2,339 operators. Average age of the patients in the study was 76.2 years; 40.2 percent were women; and 4.3 percent were black.

The authors found higher 30-day mortality in patients treated early vs. late during a new operator's experience (2.3 percent vs. 1.4 percent, respectively). Compared with patients who were their operator's 12th procedure or higher, those who were among their operator's first 11 procedures had a 1.7 times higher odds of dying within 30 days of the procedure.

"In conclusion, many physicians have begun performing carotid stenting in Medicare beneficiaries during recent years, although most operators appear to have developed limited experience with the procedure over time, " study authors write. "This finding is important since adjusted outcomes following the procedure are worse among very low-volume operators and early during an operator's experience. Given limitations of these data, caution should be exerted when using our findings to set specific targets for operator experience.