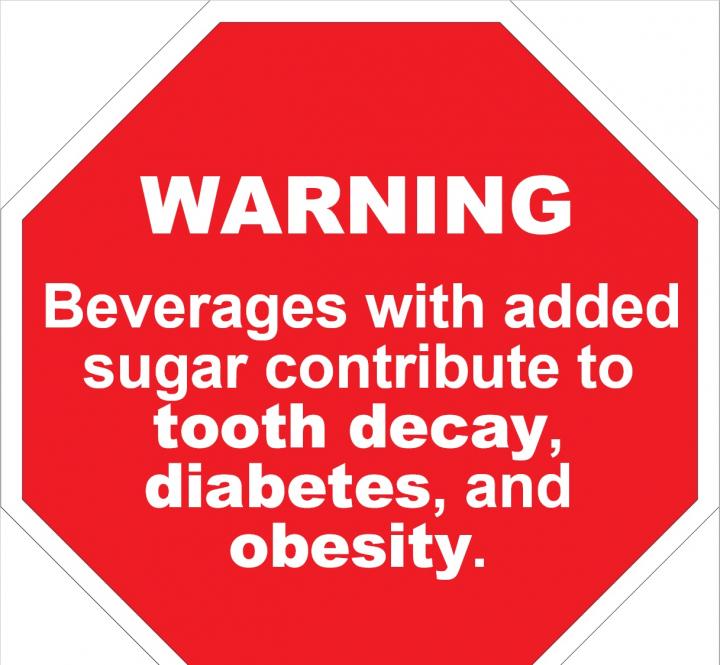 IMAGE: For study participants assigned to be exposed to health warnings, all SSBs in the trial store displayed this health warning on the front of the container. The image is the...

Baltimore (June 9, 2019) - Drinks with added sugar, also known as sugar-sweetened beverages (SSBs), are one of the largest sources of added sugar in the American diet and a major contributor to obesity. SSBs include non-diet sodas, flavored juice drinks, sports drinks, sweetened tea, coffee drinks, energy drinks and electrolyte replacement drinks. Research presented at Nutrition 2019 will examine how various policies could help reduce the consumption of these sugary beverages and improve health.

Nutrition 2019 is being held June 8-11, 2019 at the Baltimore Convention Center. Contact the media team for more information or to obtain a free press pass to attend the meeting.

Should we tax drinks with added sugar?

SSB taxes would decrease obesity-related cancer
A new study estimates that a national 1 cent per ounce of SSB tax could prevent around 17,000 new obesity-associated cancers cases and 10,000 cancer deaths. This modeling study estimates that this tax would save $2.4 billion in lifetime medical costs for 13 types of cancer. The largest health benefits were for endometrial, kidney and liver cancer. Christina Griecci, Tufts University, will present this research on Sunday, June 9, from 12:45 - 1:45 p.m. in the Baltimore Convention Center, Halls A-B (Poster 75) (abstract).

Health warnings can discourage purchases
According to a study involving 400 adults, health warnings on SSBs can discourage the purchase of these drinks. Adults who typically drink sugary beverages were given $10 to spend at a life-size convenience store replica selling SSBs and other products. Study participants randomly assigned to a group in which SSBs in the store displayed health warnings purchased fewer calories from SSBs and were less likely to purchase an SSB than those consumers shown products without the labels. Anna Grummon, University of North Carolina-Chapel Hill, will present this research on Tuesday, June 11, from 8:30 - 8:45 a.m. in the Baltimore Convention Center, Room 314/315 (abstract).

Health warnings might also reduce obesity
A new simulation study reveals that using health warnings on SSBs across the U.S. could reduce average SSB intake by about 25 calories per day and total calorie intake by about 30 calories per day. These dietary changes could reduce average body mass index by about 0.6 kg/m2 over 5 years--equivalent to losing about 4 pounds for the average adult. The policy was also projected to reduce obesity prevalence by more than 5 million adults over this period. Weight loss would be most pronounced among Black or Hispanic adults as well as those with lower income and educational attainment. Anna Grummon, University of North Carolina-Chapel Hill, will present this research on Tuesday, June 11, from 8:45 - 9:00 a.m. in the Baltimore Convention Center, Room 314/315 (abstract).

SSBs are often for home consumption
A preliminary analysis found that nearly 80 percent of U.S. households purchase or acquire SSBs in a given week. On average, U.S. households acquire nearly 2000 calories from SSBs per week, with more than 60 percent of SSB calories acquired to bring home for later consumption. The researchers used data from the USDA Food Acquisition and Purchasing Survey, which collected 7 days of data on all foods purchased or obtained for free in a nationally representative sample of 4,826 households during 2012. These findings point to the need for interventions that target SSB consumption at home to reduce overall SSB acquisition. Stephen Onufrak, Centers for Disease Control and Prevention, will present this research on Monday, June 10, from 8:30 - 8:45 a.m. in the Baltimore Convention Center, Room 314/315 (abstract).