DNA evidence lifted from the ancient bones and teeth of people who lived in Europe from the Late Pleistocene to the early Holocene -- spanning almost 30,000 years of European prehistory -- has offered some surprises, according to researchers who report their findings in the Cell Press journal Current Biology on Feb. 4, 2016. Perhaps most notably, the evidence shows a major shift in the population around 14,500 years ago, during a period of severe climatic instability.

"We uncovered a completely unknown chapter of human history: a major population turnover in Europe at the end of the last Ice Age," says leading author Johannes Krause of the Max Planck Institute for the Science of Human History in Germany.

The researchers pieced this missing history together by reconstructing the mitochondrial genomes of 35 hunter-gatherer individuals who lived in Italy, Germany, Belgium, France, the Czech Republic, and Romania from 35,000 to 7,000 years ago. Mitochondria are organelles within cells that carry their own DNA and can be used to infer patterns of maternal ancestry. 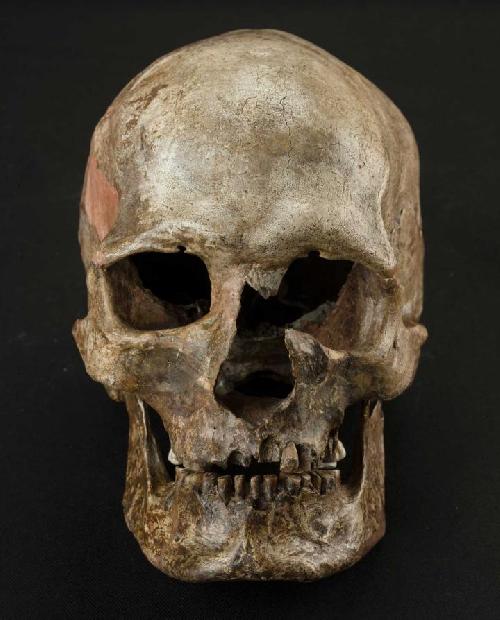 "There has been a real lack of genetic data from this time period, so consequently we knew very little about the population structure or dynamics of the first modern humans in Europe," Krause says.

The new data show that the mitochondrial DNA of three individuals who lived in present-day Belgium and France before the coldest period in the last Ice Age -- the Last Glacial Maximum -- belonged to haplogroup M. This is remarkable because the M haplogroup is effectively absent in modern Europeans but is extremely common in modern Asian, Australasian, and Native American populations.

The absence of the M haplogroup and its presence in other parts of the world had previously led to the argument that non-African people dispersed on multiple occasions to spread across Eurasia and Australasia. The researchers say the discovery of this maternal lineage in Europe in the ancient past now suggests instead that all non-Africans dispersed rapidly from a single population, at a time they place around 50,000 years ago. Then, at some later stage, the M haplogroup was apparently lost from Europe.

"When the Last Glacial Maximum began around 25,000 years ago, hunter-gatherer populations retreated south to a number of putative refugia, and the consequent genetic bottleneck probably resulted in the loss of this haplogroup," explains first author of the study Cosimo Posth of Germany's University of Tübingen.

The researchers say their biggest surprise, however, was evidence of a major turnover of the population in Europe around 14,500 years ago, as the climate began to warm. "Our model suggests that during this period of climatic upheaval, the descendants of the hunter-gatherers who survived through the Last Glacial Maximum were largely replaced by a population from another source," says Adam Powell, another senior author at the Max Planck Institute for the Science of Human History.

The researchers say the next step is to construct a more comprehensive picture of the past by analyzing the complete genomes of these ancient individuals along with additional specimens representing more times and places.