Discovery could hold the key to super-sensory hearing

The discovery of a previously unidentified hearing organ in the South American bushcrickets' ear could pave the way for technological advancements in bio-inspired acoustic sensors research, including medical imaging and hearing aid development.

Researchers from the University of Bristol and University of Lincoln discovered the missing piece of the jigsaw in the understanding of the process of energy transformation in the 'unconventional' ears of the bushcrickets (or katydids).

Bushcrickets have four tympana (or ear drums) – two on each foreleg; but until now it has been unknown how the various organs connect in order for the insect to hear. As the tympana (a membrane which vibrates in reaction to sound) does not directly connect with the mechanoreceptors (sensory receptors), it was a mystery how sound was transmitted from air to the mechano-sensory cells.

Sponsored by the Human Frontiers Science Program (HFSP), the research was developed in the lab of Professor Daniel Robert, a Royal Society Fellow at the University of Bristol. Dr Fernando Montealegre-Z, who is now at the University of Lincoln's School of Life Sciences, discovered a newly identified organ while carrying out research into how the bushcricket tubing system in the ear transports sound. The research focussed on the bushcricket Copiphora gorgonensis, a neotropical species from the National Park Gorgona in Colombia, an island in the Pacific. Results suggest that the bushcricket ear operates in a manner analogous to that of mammals. A paper detailing this remarkable new breakthrough is published today in the journal, Science.

Dr Montealegre-Z said: "We discovered a novel structure that constitutes the key element in hearing in these insects, which had not been considered in previous work. The organ is a fluid-filled vesicle, which we have named the 'Auditory Vesicle'. This hearing organ mediates the process of conversion of acoustic energy (sound waves) to mechanical, hydraulic and electrochemical energy. The integration laser Doppler vibrometry and micro-CT scanning allowed us to identify the auditory vesicle and to conclude that the process relies on a tympanal lever system analogous to the mammalian ossicles. This serves to transmit air-borne vibrations to the fluid (the auditory vesicle), and also on the mechanoreceptors. Therefore the bushcricket ear performs the crucial stage of air to liquid impedance conversion and amplification just as in a mammal's ear." 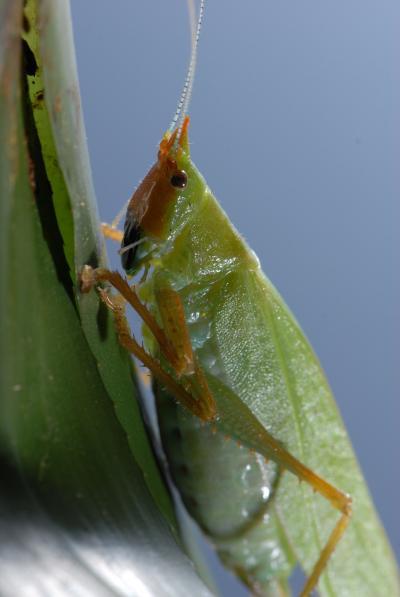 This is a South American bushcricket from which Dr. Montealegre-Z and Professor Daniel Robert discovered a previously unidentified hearing organ which could pave the way for technological advancements in bio-inspired acoustic sensors research.

In mammals, hearing relies on three canonical processing stages: an eardrum collecting sound, a middle ear impedance converter and a cochlear frequency analyser. The katydid ear performs these steps in the hearing process, something previously unknown in insects. The discovery of the impedance conversion and amplification mechanisms is a huge step forward in understanding the mechanisms of hearing processes in insects. This level of sophistication, sensitivity and functionality of insect hearing could be transferred into engineered bio-inspired systems. For instance, the ears of some bushcricket species are remarkably sensitive and can detect extreme ultrasonic signals (>130 kHz) at long distances. Such performance and sensitivity would have the potential to inspire engineers in the design and construction of acoustic sensors and actuators.

Dr Montealegre-Z plans to further his research to study the ears of species of the genus Arachnoscelis which use extreme ultrasonics (130 – 150kHz) in order to find out how bushcrickets are able to hear each other's high pitched sounds from long distances.

He said: "These results were obtained on a single species, C. gorgonensis, which uses moderate ultrasonic frequencies of 23kHz. However, we have measured other species and have discovered a bushcricket species in the rainforests of South America, which emits sounds at 150kHz. Sounds at these frequencies suffer excess attenuation and would not transmit far in a rainforest environment, therefore limiting long-range communication. Yet they manage to listen to one another from far greater distances. We don't know how they do it, but we do think this sensitivity comes, in part, from the Auditory Vesicle. The University of Lincoln has an excellent team able to continue with this research, while also collaborating with partners at other universities. These findings change our views on insect hearing and open the way for designing ultrasensitive bio-inspired sensors."

Professor Daniel Robert is one of four academics at the University of Bristol's School of Biological Sciences who were part of the research team.

He said: "The ears of this bushcricket are teaching us that complex hearing mechanisms can take place in very small ears. As such we are learning how evolution has come up with very small, efficient and sophisticated microphones. We now have to learn how to make onelike this."

Dr Montealegre-Z is planning field research to study katydids in their natural environment in Colombia (Natural National Park Gorgona) with colleagues from the universities of Graz in Austria, Bristol and Strathclyde. Funded by a National Geographic grant the study will entail connecting special electrodes to the katydid sensory system, which will then allow the scientists to hear the same sounds as the insects.

Dr James Windmill, from the Centre for Ultrasonic Engineering in the University of Strathclyde's Department of Electronic and Electrical Engineering, said: "Dr Montealegre's findings will make a valuable contribution to our search for the next generation of ultrasonic engineering technologies. By improving our understanding of insect hearing and sensory systems, we can incorporate new ideas and techniques into a wide range of technologies, including hearing aids, biomedical imaging systems for hospitals, and ultrasonic non-destructive evaluation to assess the structural integrity of buildings and bridges. I look forward to working with Dr Montealegre and colleagues on the next stage of this important research, bringing together bioscience and engineering to create the bio-inspired sensors of the future."