A multi-disciplinary research team from the National University of Singapore (NUS) has made a breakthrough discovery of a new type of immune cells that may help in the development of a future treatment for multiple sclerosis (MS).

Led by Professor Xin-Yuan Fu, Senior Principal Investigator from CSI Singapore and Professor at the Department of Biochemistry at the NUS Yong Loo Lin School of Medicine, and Dr Wanqiang Sheng, post-doctoral fellow at CSI Singapore, the team found that a new type of immune T helper cells named TH-GM cells play a crucial role in the immune system and pathogenesis of neuronal inflammation. The findings shed light on a possible new avenue for therapeutic intervention, which can be used independently or in conjunction with other treatment options to improve outcomes in the treatment of MS.

Working with Dr Yong-Liang Zhang from the Department of Microbiology at the NUS Yong Loo Lin School of Medicine, Prof Fu and his team showed that STAT5, a member of the STAT family of proteins, programs TH-GM and initiates the immune response to an auto-antigen in responding to a signal from an interleukin, IL-7, causing neuro-inflammation, pathogenesis and damage in the central nervous system. Blocking IL-7 or STAT5 would provide a significant therapeutic benefit for this disease. The study was first published online on 21 November in the journal Cell Research by Nature Publishing Group.

MS is the most prevalent autoimmune disease of the central nervous system, affecting about 2.5 million people globally, with cases showing a higher prevalence in Northern Europe. Despite many years of research, the causes of MS are largely unclear and the disease remains incurable. 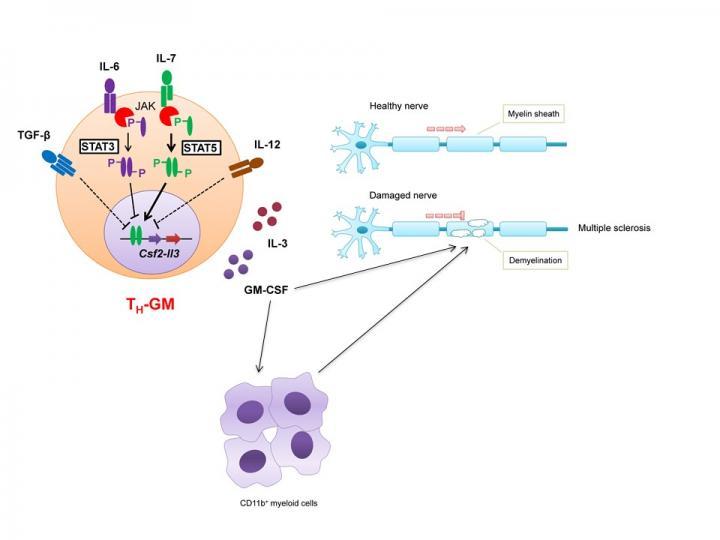 A new type of T cell, TH-GM, produces a cytokine, GM-CSF, to recruit and activate other inflammatory cells, including macrophages, to cause neuroinflammation, demyelination and nerve system damage.

This study offers an important insight into the mechanisms behind MS. Dr Richard Flavell, Chair of the Department of Immunology at Yale University, USA, and a world leader in the immunology field, noted that the results from the study may now provide a mechanistic link between IL-7/STAT5-mediated signalling and T helper cell-mediated pathogenicity.

The STAT family of proteins and their signalling pathway (called JAK-STAT) were originally discovered by Prof Fu and his colleagues in 1992. Disturbance of this pathway was shown to be a major cause for many kinds of inflammatory diseases. Novel medicines interfering with JAK-STAT have since been approved in the United States, Europe, and Singapore for the treatment of numerous diseases, and annual sales of medicines involving JAK-STAT are expected to exceed US$1.6 billion in 2016. The newly discovered IL-7-STAT5 by Prof Fu and his team in neuro-inflammation significantly expands this line of medical research, development and therapeutic intervention in a number of major diseases.

Moving forward, Prof Fu and his team are researching the physiological function of TH-GM to further the development of therapy for various human autoimmune diseases.