A dictionary of thousands of words chronicling the everyday lives of people in ancient Egypt — including what taxes they paid, what they expected in a marriage and how much work they had to do for the government — has been completed by scholars at the University of Chicago.

The ancient language is Demotic Egyptian, a name given by the Greeks to denote it was the tongue of the demos, or common people. It was written as a flowing script and was used in Egypt from about 500 B.C. to 500 A.D., when the land was occupied and usually dominated by foreigners, including Persians, Greeks and Romans.

The language lives on today in words such as adobe, which came from the Egyptian word for brick. The word moved through Demotic, onto Arabic and eventually to Spain during the time of Islamic domination there, explained Janet Johnson, editor of the Chicago Demotic Dictionary.

Ebony, the dark wood that was traded down the Nile from Nubia (present-day Sudan), also comes from Demotic roots. The name Susan is indirectly related to the Demotic word for water lily.

"Demotic was used for business and legal documents, private letters and administrative inscriptions, and literary texts, such as narratives and pieces of wisdom literature," said Johnson, the Morton D. Hull Distinguished Service Professor at the Oriental Institute."It was also used for religious and magical texts as well as scientific texts dealing with topics such as astronomy, mathematics and medicine. It is an indispensible tool for reconstructing the social, political and cultural life of ancient Egypt during a fascinating period of its history," she continued. 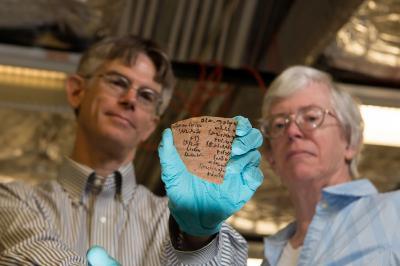 Brian Muhs and Janet Johnson, researchers at the University of Chicago's Oriental Institute, display a pottery piece with Demotic writing.

"The University of Chicago is pretty much Demotic central," said James Allen, PhD'81, the Wilbour Professor of Egyptology and chair of the Department of Egyptology and Ancient Western Asian Studies at Brown University. "Besides the Demotic dictionary, the University also has some of the world's top experts on Demotic on its faculty.

"This dictionary will be very useful, as there are more unpublished documents in Demotic than any other phase of ancient Egyptian," he said.

The Demotic language was one of the three texts on the Rosetta stone, which was also written in Egyptian hieroglyphs and Greek. In addition to being used on stone carvings, the script was left behind on papyrus and broken bits of pottery.

"The last four decades have seen a real explosion of Demotic studies, with more scholars focusing on this material, and great leaps in our understanding of this late version of the Egyptian language," said Gil Stein, director of the Oriental Institute. "The Chicago Demotic Dictionary is reaching completion at the perfect time to have an enormous impact on our understanding of Egyptian civilization in the final few centuries, when it still flourished as a vibrant and unique culture.

"The Chicago Demotic Dictionary provides the key to understanding the vast body of Demotic contracts, letters, tax records and other documents; this allows us to hear the voices of the people who made up the vast majority of Egyptian society during the period when they were under first Greek and then Roman rule," Stein said.