While drinking your favourite cold drink, you probably do not imagine what is going on inside each ice cube. At the Okinawa Institute of Science and Technology Graduate University (OIST), the Theory of Quantum Matter Unit, led by Professor Nic Shannon has explained in detail the theory behind two experiments that show how protons inside ice behave. Their findings have been published in Physical Review B.

Everything we see from a cloud of smoke to a solid rock takes that specific form because of the collective behaviour of the atoms that make up that object. However, how do atoms choose how to behave? And which choices do they have? "We understand almost everything about how a single quantum particle behaves," explains Prof. Shannon, "but put a group of quantum particles together, and anything can happen. Surprisingly, we still don't really know what happens in something as simple as ice."

A water molecule (H20) is formed when an oxygen ion forms covalent bonds with two protons (hydrogen). In ice, these water molecules are connected by weaker hydrogen bonds, so that every oxygen forms two short covalent bonds and two long hydrogen bonds with its neighbouring protons. Water ice is unique, because the oxygen atoms are ordered in hexagonally shaped crystals similar to honeycombs, but the hydrogen protons do not follow a regular pattern. Instead, they respect the so-called "ice rules": each bond can contain only one proton and each oxygen ion has two protons adjacent to it; but there are virtually infinite ways for the protons to satisfy this rule, even in a small piece of ice. So are protons in ice ordered or disordered? 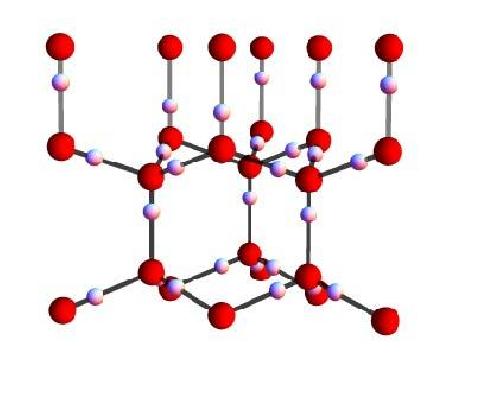 This is the most common crystal structure of water ice. Oxygen (red sphere) are located in a hexagonal configuration, similar to a honey comb. Each oxygen ion is bound to neighboring protons (white sphere, hydrogen) by two short bonds and two longer bonds. The structure respects the ice rules: each bond can contain only one proton and each oxygen ion has two protons adjacent to it. Credit: OIST

OIST scientists have answered this first question by offering a theoretical explanation of the results from an experiment carried out in England, in which neutrons were scattered from crystals of frozen heavy water (D20). When neutrons are scattered from the ordered atoms in a crystal, experiments show a regular pattern of spots. Meanwhile scattering from completely disordered atoms is uniform, and featureless. But for protons in ice, neither of these things happens, and experiments instead show patterns which look like bowties, and like the letter "M". The "bowties", technically called "pinch points", are particularly interesting, because they show that protons are not completely disordered. They are locally ordered, yet globally disordered. This pattern is very rare in nature, it happens only in ice, a type of magnet called spin ice and a class of materials called proton-bonded ferroelectrics. "The presence of pinch points is telling us that protons can be described mathematically by a type of theory called a gauge theory, which is common to all the fundamental forces of nature. This is one of nature's best tricks," explains Prof. Shannon, "and is the basis of the Standard Model of elementary particles".

The OIST team also analysed ice from a different angle, from the point of view of quantum physics. Quantum physics allows protons to hop from one place to another, by a phenomenon called quantum tunnelling. Therefore, while oxygen's position is stable and ordered, protons can have a more fluid behavior. "Protons in water ice are not still, they dance around the oxygen," illustrates Prof. Shannon. "Experiments suggest that protons are disordered and mobile even at temperatures close to -268 ºC".

Using a quantum version of their gauge theory, OIST scientists suggested a theoretical explanation for the results of another experiment, also carried out in England, which measured the energy absorbed by ice from a beam of neutrons passing through it. "When you sing to a glass, you can make it vibrate. When neutrons scatter from the protons in ice, they do the same thing," explains Prof. Shannon. But in this case, the collective "vibration" of the disordered protons has a very special form: it behaves exactly like photons, the elementary particles that make up light. However, while ordinary photons are vibrations of electric and magnetic fields, ice's photons are made up of protons, moving in a coordinated manner. "The mathematics that explains the collective motion of protons in ice is exactly the same as the mathematics that describe light. Light and proton movements in ice are very similar," points out Dr Owen Benton, the first author in this study.

"The more that we learn about water, the more we realise that it is one the strangest and most beautiful things in the Universe," concludes Prof. Shannon. Think about it, when sipping your favourite cold drink!