A new University of Iowa study suggests there are two root causes of a type of diabetes associated with cystic fibrosis (CF). The findings, which already have sparked a clinical trial, may guide development of new treatments or even help prevent diabetes in patients with CF.

Almost half of patients with CF will develop diabetes by age 30 and almost one quarter will develop it in their teens. In addition to the health problems caused by high blood sugar, diabetes also worsens lung disease and increases the risk of dying for people with CF. However, the underlying cause of CF-related diabetes is not well understood, and differs from the causes of type 1 or type 2 diabetes.

Using a new animal model of CF, the study found two abnormalities that affect the pancreas, the organ that produces insulin, which controls blood sugar levels. The study shows that CF progressively damages the pancreas, disrupting insulin production. More surprisingly, the study also found that CF disrupts the pancreas' insulin production even before the physical damage occurs. The results were published Sept. 17 in the Journal of Clinical Investigation.

The UI team studied ferrets with CF that were recently developed in the lab of John Engelhardt, Ph.D., professor and head of anatomy and cell biology at the UI Carver College of Medicine.

"We turned to ferrets because studies in humans and mice have been unable to determine the underlying cause of many CF complications, including diabetes," Engelhardt says. "We found that ferrets with CF, just like humans, spontaneously develop diabetes leaving them unable to prevent high blood sugar levels following a meal."

"This finding fits well with the long-held view that CF-related diabetes stems from physical damage to the pancreas, which limits the amount of insulin the pancreas can produce," says study co-leader Andrew Norris, M.D., Ph.D., associate professor of pediatrics and biochemistry.

Engelhardt and Norris also are members of the Fraternal Order of Eagles Diabetes Research Center at UI. 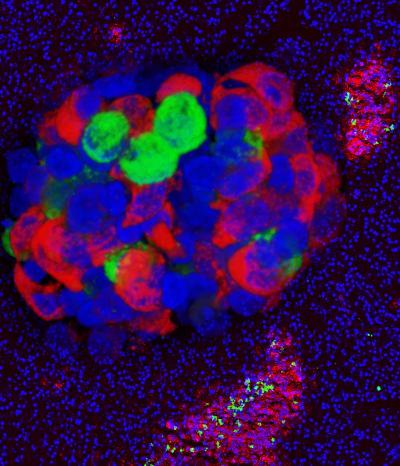 However, studies in newborn CF ferrets led to an interesting twist in the team's findings. The pancreas in newborn ferrets is essentially healthy, so the team expected normal insulin levels and normal blood sugar regulation. Instead, newborn CF ferrets were unable to control spikes in blood sugar. The study showed that this was because the pancreas in these animals did not secrete the appropriate amount of insulin in response to a spike in blood sugar.

Further investigation homed in on groups of cells with the pancreas -- called islets -- as the source of the problem. Islets are the body's insulin-producing factories. The researchers found that islets from newborn CF ferrets did not secrete insulin normally.

"The finding of abnormal sugar-regulated insulin secretion by isolated CF islets demonstrates for the first time that some of the problems that lead to diabetes in CF patients likely reside within cells of the islet," Engelhardt says.

Likening the CF defect in islets to a broken sugar-thermometer, Engelhardt adds, "CF islets fail to adequately sense changes in sugar and this leads to poorly regulated insulin production."

Although the cellular mechanism for this abnormality is not yet known, findings suggest that the chloride channel protein, which is defective in CF, may directly or indirectly control insulin secretion by the islet.

"This indicates that CF causes a second problem which underlies diabetes, separate from pancreatic structural damage," Norris says. "Ultimately, this research will allow us to determine the major root causes of CF-related diabetes, and may help guide development of new therapies and preventative strategies."

The new findings already have generated clinical interest in studying the early changes that occur in insulin regulation in infants and young children with CF. Katie Larson Ode, M.D., clinical assistant professor of pediatrics with UI Children's Hospital, and Toni Moran, M.D., at University of Minnesota, have started a clinical trial to study these abnormalities. Additionally, Engelhardt and Norris have teamed up with Aliye Uc, M.D., UI associate professor of pediatrics, to leverage her expertise on pancreatic damage in ongoing studies of animals with CF.

"Although these studies are focused on cystic fibrosis, future insights into how the cystic fibrosis chloride channel functions to regulate insulin secretion may also lead to better treatments for type 2 and other forms of diabetes," Norris concludes.