Gifted students who feel the pressure of their ability could be using Heavy Metal music to get rid of negative emotions.

This is the conclusion of Stuart Cadwallader and Professor Jim Campbell of The National Academy for Gifted and Talented Youth at the University of Warwick. They will discuss their findings at the British Psychological Society’s Annual Conference at the University of York on Wednesday 21 March 2007.

According to the Centers for Disease Control (CDC), adolescents and young adults currently account for fifty percent of new HIV infections on an annual basis. As a result, ongoing research and information on HIV prevention has become a high priority for this age group. Now a new study reveals that helping adolescents manage their emotions may be just as important as providing them with information on the practical side of safe sex in order to prevent HIV and other sexually transmitted infections.

Mussels and Oysters Endangered by the Acidification of the Oceans

Since the beginning of the industrial age the ocean has absorbed about half of all anthropic(1) carbon dioxide (CO2) emissions into the atmosphere. This has led to an acidification of sea water. Frédéric Gazeau, a scientist at the Netherlands Institute of Ecology, and his colleagues, including Jean-Pierre Gattuso, Director of Research at the Oceanographic laboratory at Villefranche-sur-Mer (CNRS/Université Pierre et Marie Curie) have examined the reaction of oysters and mussels cultivated in Europe to this acidification of the oceans.

Board oversight critical for success of corporate ethics programs

A federal law requiring publicly traded firms to disclose whether they have adopted codes of ethics for their senior financial officers may be useful, but a Penn State researcher says its impact is often limited.

A firm's board of directors needs to be the driving force behind creating and implementing the program in most cases for it to truly be successful.

A new nanoscale apparatus developed at JILA—a tiny gold beam whose 40 million vibrations per second are measured by hopping electrons—offers the potential for a 500-fold increase in the speed of scanning tunneling microscopes (STM), perhaps paving the way for scientists to watch atoms vibrate in high definition in real time. 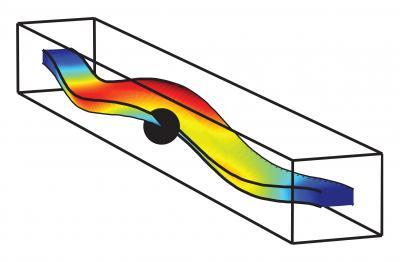 This slow-motion simulation of the JILA nanoscale motion detector shows the wiggling of a floppy metal beam, just 100 nanometers thick, as it is struck by an electric current at the dot.

Sandia’s huge Z machine, which generates termperatures hottter than the sun, has turned water to ice in nanoseconds. However, don’t expect anything commercial just yet: the ice is hotter than the boiling point of water. "The three phases of water as we know them — cold ice, room temperature liquid, and hot vapor — are actually only a small part of water’s repertory of states," says Sandia researcher Daniel Dolan. "Compressing water customarily heats it.

A new NASA study has found that an important counter-balance to the warming of our planet by greenhouse gases – sunlight blocked by dust, pollution and other aerosol particles – appears to have lost ground.

This new estimate comes from mapping the thickness of the dusty ice by the Mars Express radar instrument that has made more than 300 virtual slices through layered deposits covering the pole. The radar sees through icy layers to the lower boundary, which in places is as deep as 3.7 kilometres below the surface.

A case of mistaken identity for the Ivory-billed Woodpecker?

Video evidence that an extinct woodpecker is alive and well in Arkansas, USA may prove to be a case of mistaken identity. Research published today in the open access journal BMC Biology shows how fleeting images thought to be the Ivory-billed Woodpecker Campephilus principalis could be another native woodpecker species.

Tiny tremors and temblors recently discovered in fault zones from California to Japan are generated by slow-moving earthquakes that may foreshadow catastrophic seismic events, according to scientists at Stanford University and the University of Tokyo.

In a study published in the March 15 issue of the journal Nature, the research team focused on weak seismic signals known as "non-volcanic tremor" and "low-frequency earthquakes," which seismologists say may be useful in forecasting the likelihood of potentially destructive mega-quakes of magnitude 8 or higher.

Jet engines help solve the mysteries of the voice

Although scientists know about basic voice production—the two "vocal folds" in the larynx vibrate and pulsate airflow from the lungs—the larynx is one of the body's least understood organs.

Sound produced by vocal-fold vibration has been extensively researched, but the specifics of how airflow actually affects sound have not been shown using an animal model—until now.

New Form of Matter-antimatter Transformation Observed for the First Time

For the first time, scientists of the BaBar experiment at the Department of Energy's Stanford Linear Accelerator Center (SLAC) have observed the transition of one type of particle, the neutral D-meson, into its antimatter particle. This observation will now be used as a test of the Standard Model, the current theory that best describes all the universe's luminous matter and its associated forces.

Using a modified ink-jet printer, a McGill University researcher is producing three-dimensional bioceramic “bones” that could one day change the way reconstructive surgery is performed.

King Alfred burned the cakes, right? Wrong. For a start they were loaves – and for another thing, the Vikings reckon their terrifying-sounding hero Ragnar Hairybreeks should take the blame for this ninth century catering disaster.

University of Leeds professor Rory McTurk says the tale of Alfred and the cakes is probably the one story we all know about the Anglo-Saxon ruler, a detail as closely woven into popular history as Robert the Bruce being inspired by a spider and King Harold getting an arrow in the eye.