Cryptic sense of orientation of bats localised: the sixth sense of mammals lies in the eye 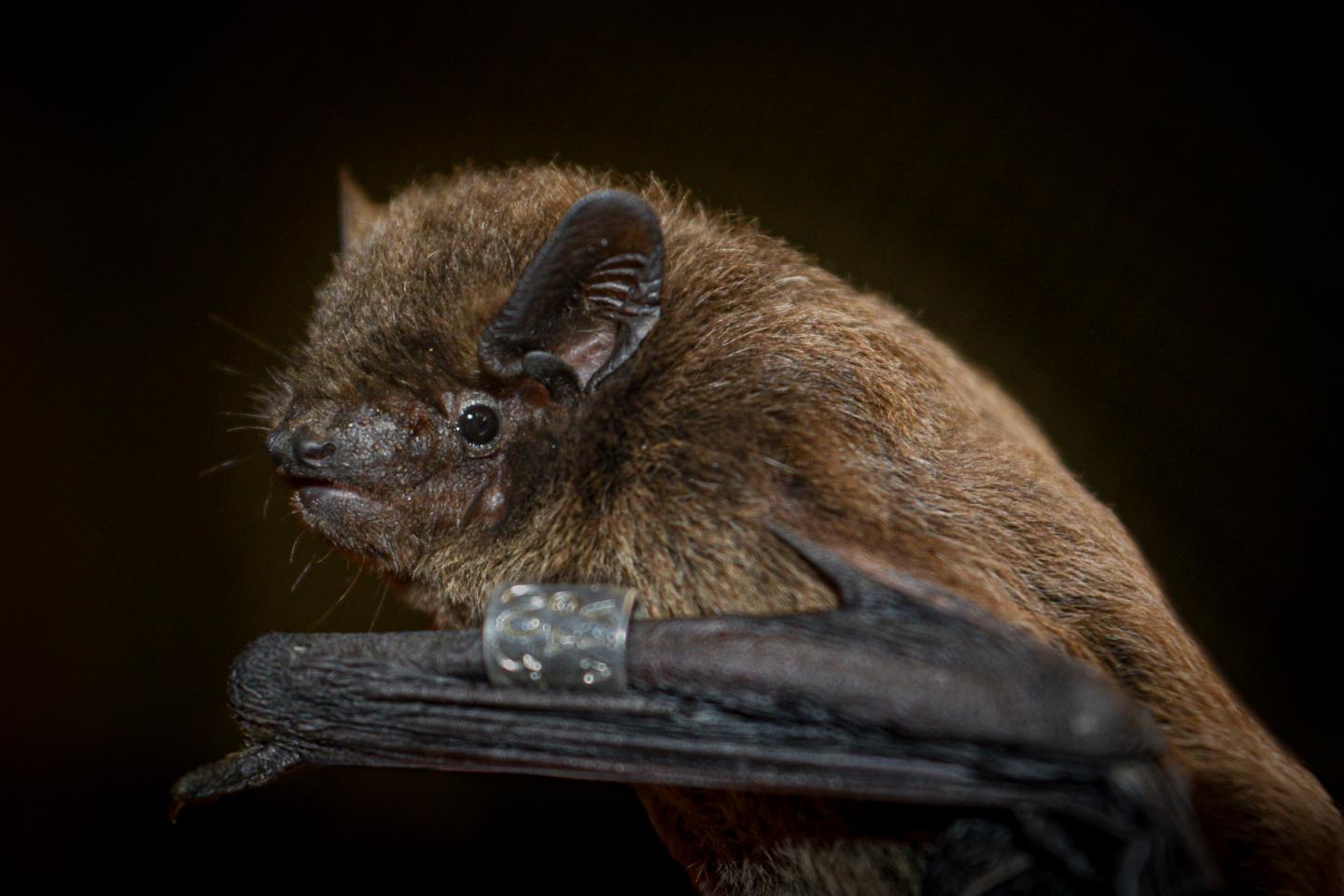 IMAGE: A captured Nathusius bat (Pipistrellus nathusii) during the experiments.

Mammals see with their eyes, hear with their ears and smell with their nose. But which sense or organ allows them to orient themselves on their migrations, which sometimes go far beyond their local foraging areas and therefore require an extended ability to navigate? Scientific experiments led by the Leibniz Institute for Zoo and Wildlife Research (Leibniz-IZW), published together with Prof. Richard A. Holland (Bangor University, UK) and Dr. Gunārs P?tersons (Latvia University of Life Sciences and Technologies) now show that the cornea of the eyes is the location of such an important sense in migrating bats. If the cornea is anaesthetised, the otherwise reliable sense of orientation is disturbed while light detection remains unimpaired. The experiment suggests the localisation of a magnetic sense in mammals. The paper is published in the scientific journal Communications Biology.

A research team led by Dr Oliver Lindecke and PD Dr Christian Voigt from Leibniz-IZW demonstrated for the first time that environmental signals that are important for navigating over long distances are picked up via the cornea of the eyes. They conducted experiments with Nathusius' bats (Pipistrellus nathusii) during the late summer migration period. In bats of one test group, the scientists locally anaesthetised the cornea with a drop of oxybuprocaine. This surface anaesthetic is widely used in ophthalmology, where it is used to temporarily desensitise the patients' cornea when eyes of humans or animals get overly irritated. Effects on orientation, however, had not been previously recorded. In another test group of bats, the research team anaesthetised the cornea of only one eye. The individuals in the control group were not anaesthetised, but instead received an isotonic saline solution as eye drops. All animals in this scientific experiment were captured within a migration corridor at the coastline of the Baltic Sea and released singly in the open field 11 kilometres inland from the capture site immediately after treatment. The scientists first used bat detectors to make sure that there were no other bats above the field at the time of release that the test animals could have followed. The person observing the direction of movement of released bats was unaware about how bats were treated experimentally. "The control group and the group with unilateral corneal anaesthesia oriented themselves clearly in the expected southerly directions, whereas the bats with bilateral anaesthetised corneas flew off in random directions," explains Dr Oliver Lindecke, first author of the paper. "This evident difference in behaviour suggests that corneal anaesthesia disrupted a sense of direction, yet orientation apparently still works well with one eye." As corneal treatment wears off after a short time, the bats were able to resume their journeys south after the experiment. "We observed here for the first time in an experiment how a migrating mammal was literally blown off course - a milestone in behavioural and sensory biology that allows us to study the biological navigation system in a more targeted way."

In order to rule out the possibility that the anaesthetisation of the cornea also affects the sense of sight and that the scientists would thus come to the wrong conclusions, they carried out a complementary test. Once again divided into experimental and control groups, they tested whether the response of bats to light changed after anaesthesia of the corneas on one or both sides. "We know from previous research that bats prefer an illuminated exit when leaving a simple Y-shaped labyrinth," explains PD Dr Christian Voigt, head of the Leibniz-IZW Department of Evolutionary Ecology. "In our experiment, the animals with one-sided or two-sided anaesthesia also showed this preference; we therefore can rule out that the ability to see light was altered after corneal treatment. The ability to see light would of course also influence long-distance navigation."

Many vertebrates such as bats, dolphins, whales, fish and turtles, for example, are able to safely navigate in darkness, whether it is under the open night sky, when it is cloudy at night or in caves and tunnels as well as in the depths of the oceans. For many decades, scientists have been searching for the sense or a sensory organ that enables animals to perform orientation and navigation tasks that seemed difficult to imagine for people. A magnetic sense, so far only demonstrated in a few mammals but poorly understood, is an obvious candidate. Experiments suggest that iron oxide particles within cells may act as "microscopic compass needles", as is the case in some species of bacteria.

Recent laboratory experiments on Ansell's mole-rat, relatives of the well-known naked mole rats that spend their lives in elaborate underground tunnel systems, suggest that the magnetic sense is located in the eye. Such a (magnetic) sense of orientation has not been checked in migratory mammals nor has it been possible to identify the specific organ or tissue which could provide the morphological basis for the required sensory receptors. The experiments of the team around Lindecke and Voigt now provide, for the first time, reliable data for the localisation of a sense of orientation in free-ranging, migratory mammals. Exactly what the sense in the cornea of the bats looks like, how it works and whether it is the long sought-after magnetic sense must be shown in future scientific investigations.