Cracking the code of the Dead Sea Scrolls 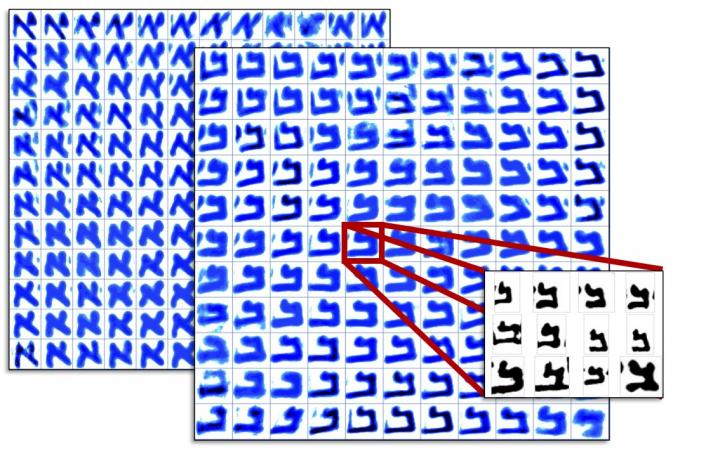 IMAGE: Two 12x12 Kohonen maps (blue colourmaps) of full character aleph and bet from the Dead Sea Scroll collection. Each of the characters in the Kohonen maps is formed from multiple...

The Dead Sea Scrolls, discovered some seventy years ago, are famous for containing the oldest manuscripts of the Hebrew Bible (Old Testament) and many hitherto unknown ancient Jewish texts. But the individual people behind the scrolls have eluded scientists, because the scribes are anonymous. Now, by combining the sciences and the humanities, University of Groningen researchers have cracked the code, which enables them to discover the scribes behind the scrolls. They presented their results in the journal PLOS ONE on 21 April.

The scribes who created the scrolls did not sign their work. Scholars suggested some manuscripts should be attributed to a single scribe based on handwriting. 'They would try to find a "smoking gun" in the handwriting, for example, a very specific trait in a letter which would identify a scribe', explains Mladen Popovi&cacute;, professor of Hebrew Bible and Ancient Judaism at the Faculty of Theology and Religious Studies at the University of Groningen. He is also director of the university's Qumran Institute, dedicated to studying the Dead Sea Scrolls. However, these identifications are somewhat subjective and often hotly debated.

That is why Popovi&cacute;, in his project The Hands that Wrote the Bible which was funded by the European Research Council, teamed up with his colleague Lambert Schomaker, professor of Computer Science and Artificial Intelligence at the Faculty of Science and Engineering. Schomaker has long worked on techniques to allow computers to read handwriting, often from historical materials. He also performed studies to investigate how biomechanical traits, like the way in which someone holds a pen or stylus, would affect handwriting.

In this study, together with PhD candidate Maruf Dhali, they focused on one scroll in particular: the famous Great Isaiah Scroll (1QIsaa) from Qumran Cave 1. The handwriting in this scroll seems near-uniform, yet it has been suggested it was made by two scribes sharing a similar writing style. So how could this be decided? Schomaker: 'This scroll contains the letter aleph, or "a", at least five thousand times. It is impossible to compare them all just by eye.' Computers are well suited to analyse large datasets, like 5,000 handwritten a's. Digital imaging makes all sorts of computer calculations possible, at the microlevel of characters, such as measuring curvature (called textural), as well as whole characters (called allographic).

'The human eye is amazing and presumably takes these levels into account too. This allows experts to "see" the hands of different authors, but that decision is often not reached by a transparent process,' Popovi&cacute; says. 'Furthermore, it is virtually impossible for these experts to process the large amounts of data the scrolls provide.' That is why their results are often not conclusive.

The first hurdle was to train an algorithm to separate the text (ink) from its background (the leather or the papyrus). For this separation, or 'binarization', Dhali developed a state-of-the-art artificial neural network that can be trained using deep learning. This neural network keeps the original ink traces made by the scribe more than 2,000 years ago intact as they appear on the digital images. 'This is important because the ancient ink traces relate directly to a person's muscle movement and are person-specific', Schomaker explains.

Dhali performed the first analytical test of this study. His analysis of textural and allographic features showed that the 54 columns of text in the Great Isaiah Scroll fell into two different groups that were not distributed randomly through the scroll, but were clustered, with a transition around the halfway mark.

With the remark that there might be more than one writer, Dhali then handed the data to Schomaker who then recomputed the similarities between the columns, now using the patterns of letter fragments. This second analytical step confirmed the presence of two different. Several further checks and controls were performed. Schomaker: 'When we added extra noise to the data, the result didn't change. We also succeeded in demonstrating that the second scribe shows more variation within his writing than the first, although their writing is very similar.'

In the third step, Popovi&cacute;, Dhali, and Schomaker have produced a visual analysis. They created 'heat maps' that incorporate all the variants of a character across the scroll. Then they produced an averaged version of this character for the first 27 columns and the last 27 columns. Comparing these two average letters by eye shows that they are different. This links the computerized and statistical analysis to human interpretation of the data by approximation, because the heatmaps are neither dependent nor produced from the primary and secondary analyses.

Certain aspects of the scroll and the positioning of the text had led some scholars to suggest that after column 27 a new scribe had started, but this was not generally accepted. Popovi&cacute;: 'Now, we can confirm this with a quantitative analysis of the handwriting as well as with robust statistical analyses. Instead of basing judgment on more-or-less impressionistic evidence, with the intelligent assistance of the computer, we can demonstrate that the separation is statistically significant.'

In addition to transforming the palaeography of the scrolls - and potentially other ancient manuscript corpora - this study of the Great Isaiah Scroll opens up a totally new way to analyse the Qumran texts based on physical characteristics. Now, researchers can access the microlevel of individual scribes and carefully observe how they worked on these manuscripts.

Popovi&cacute;: 'This is very exciting, because this opens a new window on the ancient world that can reveal much more intricate connections between the scribes that produced the scrolls. In this study, we found evidence for a very similar writing style shared by the two Great Isaiah Scroll scribes, which suggests a common training or origin. Our next step is to investigate other scrolls, where we may find different origins or training for the scribes.'

In this way, it will be possible to learn more about the communities that produced the Dead Sea Scrolls. 'We are now able to identify different scribes', Popovi&cacute; concludes. 'We will never know their names. But after seventy years of study, this feels as if we can finally shake hands with them through their handwriting.'