A push to replace old, heat-trapping paving materials with new, cooler materials could actually lead to higher electricity bills for surrounding buildings, engineers at the University of California, San Diego, have found. Researchers published their findings Oct. 29 in the new Journal of Urban Climate.

The new paving materials are designed to lower the overall temperature of the areas where they are used—something that the study, which was focused on local solar radiation and energy consumption, was not designed to measure.

The study sounds a note of caution at a time when both federal and state legislatures have been pushing for increased use of the new highly reflective pavement materials. Assembly Bill 296, which became law in California this year, is designed to advance cool pavement practices in the state and requires the compilation of a Cool Pavement Handbook. The federal Heat Island and Smog Reduction Act of 2011, currently under consideration in Congress, would specifically require paving materials with higher solar reflectivity.

"Our findings suggested that some benefits associated with reflective pavements are tied to the environment where they're used," said Jan Kleissl, a professor of environmental engineering at the Jacobs School of Engineering at UC San Diego. "More studies are needed to determine where these new materials would be most beneficial."

The new materials could have a positive effect in areas where buildings can automatically respond to additional sunlight because they are equipped with smart lighting solutions, such as dimmers run by photo-sensitive cells.

However, buildings without these features do not fare as well. The increases in consumption of cooling energy due to the new pavements ranged anywhere from 4.5 to 9.5 percent for typical newer, and better insulated, buildings; and from 5 to 11 percent for older structures. That's because the new paving materials stay cool by reflecting significantly more of the sun's rays than traditional pavements. Many rays are reflected back into space, helping to cool surrounding areas—and the planet. However, a portion of these rays gets reflected onto the windows of nearby buildings. In the researchers' study, windows facing the reflective pavements got 40 percent more daily sunshine in summer as windows facing more traditional paving surfaces (in winter the difference was only 12 percent). That in turn increases temperatures inside the building, especially if the windows do not have solar-control coating. So the buildings' occupants turn up the air conditioning. Meanwhile, office buildings that have smart lighting or energy-conscious occupants may actually benefit from the additional sunlight by being able to reduce energy use due to artificial lighting.

The worst-case scenario is when these new cooler pavements are used in office park settings with many mid-rise buildings with large window areas. The best-case scenario would be to use the new paving materials near buildings without windows; on roads or large parking lots that are not surrounded by buildings; or in warehouse districts where structures don't have air conditioning, Kleissl said.

Kleissl and Jacobs School Ph.D. student Neda Yaghoobian looked at annual energy use related to air conditioning in both older and newer four-story buildings in Phoenix, Ariz. Yaghoobian used a complex weather and building model she developed, called the Temperature of Urban Facets Indoor-Outdoor Building Energy Simulator (TUF-IOBES). The model fills an important gap by allowing the detailed simulation of the interaction between indoor and outdoor climate. The program links indoor and outdoor energy balance dynamically by taking into account real weather conditions, indoor heat sources, building and urban material properties, composition of the building envelope (such as windows and insulation), and waste heat from air conditioning.

Yaghoobian found that, as expected, temperature for the traditional, darker pavement was up to 27 degrees Fahrenheit higher than the temperature of the newer, reflective pavement. But the walls of buildings standing near the reflective pavement were up to 4 degrees Fahrenheit warmer. Specific results varied widely depending on the buildings' make up.

A watt of daylight can replace up to two watts of fluorescent lighting, depending on the lighting needs of a building. In the best-case scenario, each watt of extra daylight could reduce lighting power demand by two watts. This would also decrease the building's heat gain by one watt (net), saving another third of a watt in cooling power. Further study is needed to quantify these potential savings.

Most existing building energy models do not allow modifying outdoor ground surfaces that radiatively interact with the building. On the other hand, urban surface energy balance models in the meteorological community usually treat the buildings as hollow cubes and exclude dynamic modeling of the indoor building energy balance. A new tool was necessary and created in TUF-IOBES.

TUF-IOBES goes beyond previously available models; it is the first three-dimensional fully-coupled and computationally efficient indoor-outdoor building energy simulator. Given the complexity of solar irradiance fields in the urban canopy the surface temperature fields and energy use can be simulated more faithfully. TUF-IOBES provides unprecedented insight on urban canopy and building energy heat transfer processes. It can improve our understanding of how urban geometry and material modifications and the interaction between buildings and their surroundings and dynamic combination of all of these effects in three dimensions modify the urban energy use. 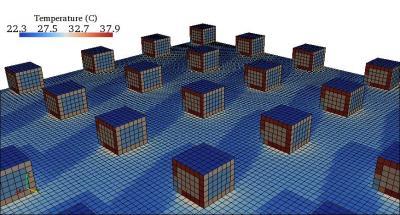 A simulation shows that while pavements covered with new, heat-trapping materials remain cool, the building's facades facing them are quite warm.