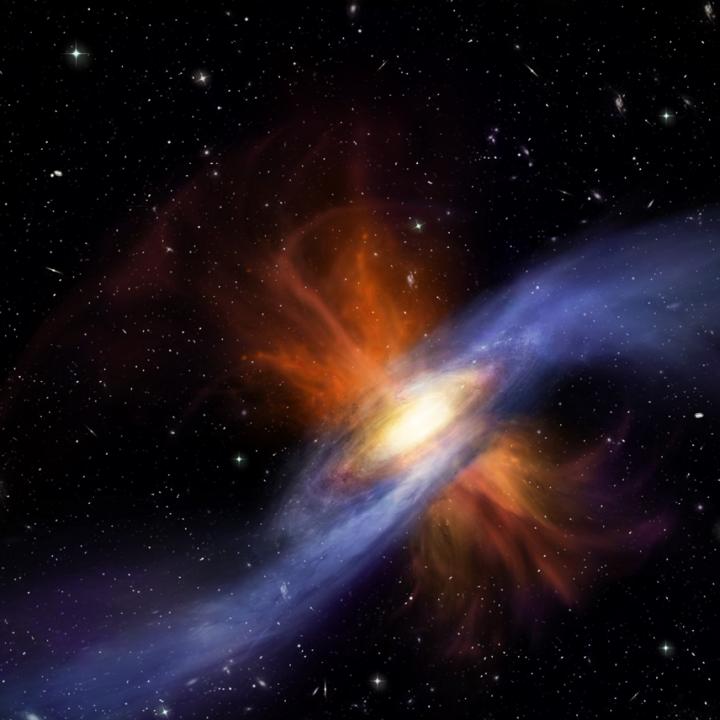 IMAGE: This is an artist conception of gas streams (blue) feeding a galactic disk. The inflow fuels new star formation, and because the infalling gas is spinning, the size of the...

Maunakea, Hawaii - A group of astronomers led by Crystal Martin and Stephanie Ho of the University of California, Santa Barbara, has discovered a dizzying cosmic choreography among typical star-forming galaxies; their cool halo gas appears to be in step with the galactic disks, spinning in the same direction.

The researchers used W. M. Keck Observatory to obtain the first-ever direct observational evidence showing that corotating halo gas is not only possible, but common. Their findings suggest that the whirling gas halo will eventually spiral in towards the disk.

"This is a major breakthrough in understanding how galactic disks grow," said Martin, Professor of Physics at UC Santa Barbara and lead author of the study. "Galaxies are surrounded by massive reservoirs of gas that extend far beyond the visible portions of galaxies. Until now, it has remained a mystery how exactly this material is transported to galactic disks where it can fuel the next generation of star formation."

The study is published in today's issue of the Astrophysical Journal and shows the combined results of 50 standard star-forming galaxies taken over a period of several years.

Nearly a decade ago, theoretical models predicted that the angular momentum of the spinning cool halo gas partially offsets the gravitational force pulling it towards the galaxy, thereby slowing down the gas accretion rate and lengthening the period of disk growth.

The team's results confirm this theory, which show that the angular momentum of the halo gas is high enough to slow down the infall rate but not so high as to shut down feeding the galactic disk entirely.

The astronomers first obtained spectra of bright quasars behind star-forming galaxies to detect the invisible halo gas by its absorption-line signature in the quasar spectra. Next, the researchers used Keck Observatory's laser guide star adaptive optics (LGSAO) system and near-infrared camera (NIRC2) on the Keck II telescope, along with Hubble Space Telescope's Wide Field Camera 3 (WFC3), to obtain high-resolution images of the galaxies.

"What sets this work apart from previous studies is that our team also used the quasar as a reference 'star' for Keck's laser guide star AO system," said co-author Ho, a physics graduate student at UC Santa Barbara. "This method removed the blurring caused by the atmosphere and produced the detailed images we needed to resolve the galactic disks and geometrically determine the orientation of the galactic disks in three-dimensional space."

The team then measured the Doppler shifts of the gas clouds using the Low Resolution Imaging Spectrometer (LRIS) at Keck Observatory, as well as obtaining spectra from Apache Point Observatory. This enabled the researchers to determine what direction the gas is spinning and how fast. The data proved that the gas is rotating in the same direction as the galaxy, and the angular momentum of the gas is not stronger than the force of gravity, meaning the gas will spiral into the galactic disk.

"Just as ice skaters build up momentum and spin when they bring their arms inward, the halo gas is likely spinning today because it was once at much larger distances where it was deposited by galactic winds, stripped from satellite galaxies, or directed toward the galaxy by a cosmic filament," said Martin.

The next step for Martin and her team is to measure the rate at which the halo gas is being pulled into the galactic disk. Comparing the inflow rate to the star formation rate will provide a better timeline of the evolution of normal star-forming galaxies, and explain how galactic disks continue to grow over very long timescales that span billions of years.