OAK BROOK, Ill. – For the first time, researchers have confirmed an association between a common magnetic resonance imaging (MRI) contrast agent and abnormalities on brain MRI, according to a new study published online in the journal Radiology. The new study raises the possibility that a toxic component of the contrast agent may remain in the body long after administration.

Brain MRI exams are often performed with a gadolinium-based contrast medium (Gd-CM). Gadolinium's paramagnetic properties make it useful for MRI, but the toxicity of the gadolinium ion means it must be chemically bonded with non-metal ions so that it can be carried through the kidneys and out of the body before the ion is released in tissue. Gd-CM is considered safe in patients with normal kidney function.

However, in recent years, clinicians in Japan noticed that patients with a history of multiple administrations of Gd-CM showed areas of high intensity, or hyperintensity, on MRI in two brain regions: the dentate nucleus (DN) and globus pallidus (GP). The precise clinical ramifications of hyperintensity are not known, but hyperintensity in the DN has been associated with multiple sclerosis, while hyperintensity of the GP is linked with hepatic dysfunction and several diseases.

To learn more, the researchers compared unenhanced T1-weighted MR images (T1WI) of 19 patients who had undergone six or more contrast-enhanced brain scans with 16 patients who had received six or fewer unenhanced scans. The hyperintensity of both the DN and the GP correlated with the number of Gd-CM administrations.

"Hyperintensity in the DN and GP on unenhanced MRI may be a consequence of the number of previous Gd-CM administrations," said lead author Tomonori Kanda, M.D., Ph.D., from Teikyo University School of Medicine in Tokyo and the Hyogo Cancer Center in Akashi, Japan. "Because gadolinium has a high signal intensity in the body, our data may suggest that the toxic gadolinium component remains in the body even in patients with normal renal function." 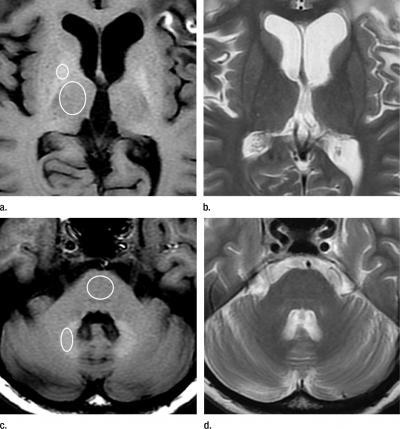 Dr. Kanda noted that because patients with multiple sclerosis tend to undergo numerous contrast-enhanced brain MRI scans, the hyperintensity of the DN seen in these patients may have more to do with the large cumulative gadolinium dose than the disease itself.

The mechanisms by which Gd-CM administration causes hyperintensity of the DN and GP remain unclear, Dr. Kanda said. Previous studies on animals and humans have shown that the ion can be retained in bone and tissue for several days or longer after administration.

"The hyperintensity of DN and GP on unenhanced T1WI may be due to gadolinium deposition in the brain independent of renal function, and the deposition may remain in the brain for a long time," Dr. Kanda suggested.

Dr. Kanda emphasized that there is currently no proof that gadolinium is responsible for hyperintensity on brain MRI. Further research based on autopsy specimens and animal experiments will be needed to clarify the relationship and determine if the patients with MRI hyperintensity in their brains have symptoms.

"Because patients who have multiple contrast material injections tend to have severe diseases, a slight symptom from the gadolinium ion may be obscured," Dr. Kanda said.

There are two types of Gd-CM , linear and macrocyclic, with distinct chemical compositions. Since the patients in the study received only the linear type, additional research is needed to see if the macrocyclic type can prevent MRI hyperintensity, according to Dr. Kanda.