Between 10 and 20 percent of all cases of epilepsy result from severe head injury, but a new drug promises to prevent post-traumatic seizures and may forestall further brain damage caused by seizures in those who already have epilepsy.

A team of researchers from the University of California, Berkeley, Ben-Gurion University in Israel and Charité-University Medicine in Germany reports in the current issue of the journal Annals of Neurology that a commonly used hypertension drug prevents a majority of cases of post-traumatic epilepsy in a rodent model of the disease. If independent experiments now underway in rats confirm this finding, human clinical trials could start within a few years.

"This is the first-ever approach in which epilepsy development is stopped, as opposed to common drugs that try to prevent seizures once epilepsy develops," said coauthor Daniela Kaufer, UC Berkeley associate professor of integrative biology and a member of the Helen Wills Neuroscience Institute. "Those drugs have a very limited success and many side effects, so we are excited about the new approach."

The team, led by Kaufer; neurosurgeon Alon Friedman, associate professor of physiology and neurobiology at the Ben-Gurion University of the Negev; and Uwe Heinemann of the Charite, provides the first explanation for how brain injury caused by a blow to the head, stroke or infection leads to epilepsy. Based on 10 years of collaborative research, their findings point a finger at the blood-brain barrier – the tight wall of cells lining the veins and arteries in the brain that is breached after trauma.

"This study for the first time offers a new mechanism and an existing, FDA-approved drug to potentially prevent epilepsy in patients after brain injuries or after they develop an abnormal blood-brain barrier," Friedman said. 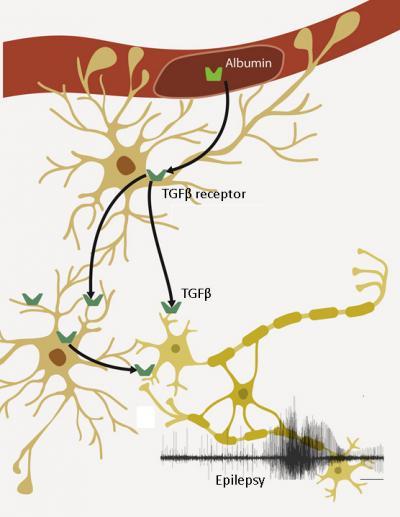 When the blood-brain barrier is disrupted by a severe head injury, the blood protein albumin leaks into the brain and activates the TGF-beta receptor on astrocytes (tan cells), which triggers a cascade of events leading to inflammation. The net result can be hyperexcitable neurons (yellow) and epileptic seizures. Kaufer, Friedman and colleagues discovered this cause and effect and identified a drug that blocks the TGF-beta receptor, preventing seizures in rats.

The drug, losartan (Cozaar®), prevented seizures in 60 percent of the rats tested, when normally 100 percent of the rats develop seizures after injury. In the 40 percent of rats that did develop seizures, they averaged about one quarter the number of seizures typical for untreated rats. Another experiment showed that administration of losartan for three weeks at the time of injury was enough to prevent most cases of epilepsy in normal lab rats in the following months.

"This is a very exciting result, telling us that the drug worked to prevent the development of epilepsy and not by suppressing the symptoms," Kaufer said.

Breakdown of the blood-brain barrier

Kaufer and Friedman have been collaboratively investigating the effects of trauma on the brain since Kaufer was a graduate student in Israel 20 years ago. Throughout a postdoctoral position at Stanford University and after joining the UC Berkeley faculty in 2005, she maintained her interest in the blood-brain barrier, which normally protects the brain from potentially damaging chemicals or bacteria in the blood and prevents brain chemicals from leaking into the blood stream.

She and Friedman showed earlier that breaking down the barrier causes inflammation and leads to the development of epilepsy. They pinned the effect to a single protein called albumin, the most common protein in blood serum.

In 2009, they showed that albumin affects astrocytes, the brain's support cells, by binding to the TGF-β (transforming growth factor-beta) receptor. This initiates a cascade of steps that lead to localized inflammation, which appears to permanently damage the brain's wiring, leading to the electrical misfiring characteristic of epilepsy. The current paper conclusively demonstrates that blocking the TGF-beta receptor with losartan stops that cascade and prevents the disorder.

Coauthor Guy Bar-Klein, a doctoral student at Ben-Gurion University, searched a long list of drugs before discovering losartan, which is approved to treat high blood pressure because it blocks the angiotensin receptor 1, but which incidentally also blocks TGF-β. It worked in the rats when delivered in their drinking water, which means that it somehow gets into the brain through the blood-brain barrier. The experiments suggest that the drug is unable to cross an intact blood-brain barrier, but reaches the brain through a breached barrier when it is most needed, Kaufer said.

Friedman developed a protocol to use MRI to check whether the blood brain barrier has been breached, allowing doctors to give losartan as a preventive treatment, if necessary, after trauma. Kaufer said that the barrier may remain open for only a few weeks after injury, so the drug would not have to be given very long to prevent damage.

"Right now, if someone comes to the emergency room with traumatic brain injury, they have a 10 to 50 percent chance of developing epilepsy, and epilepsy from brain injuries tends to be unresponsive to drugs in many patients." she said. "I'm very hopeful that our research can spare these patients the added trauma of epilepsy."