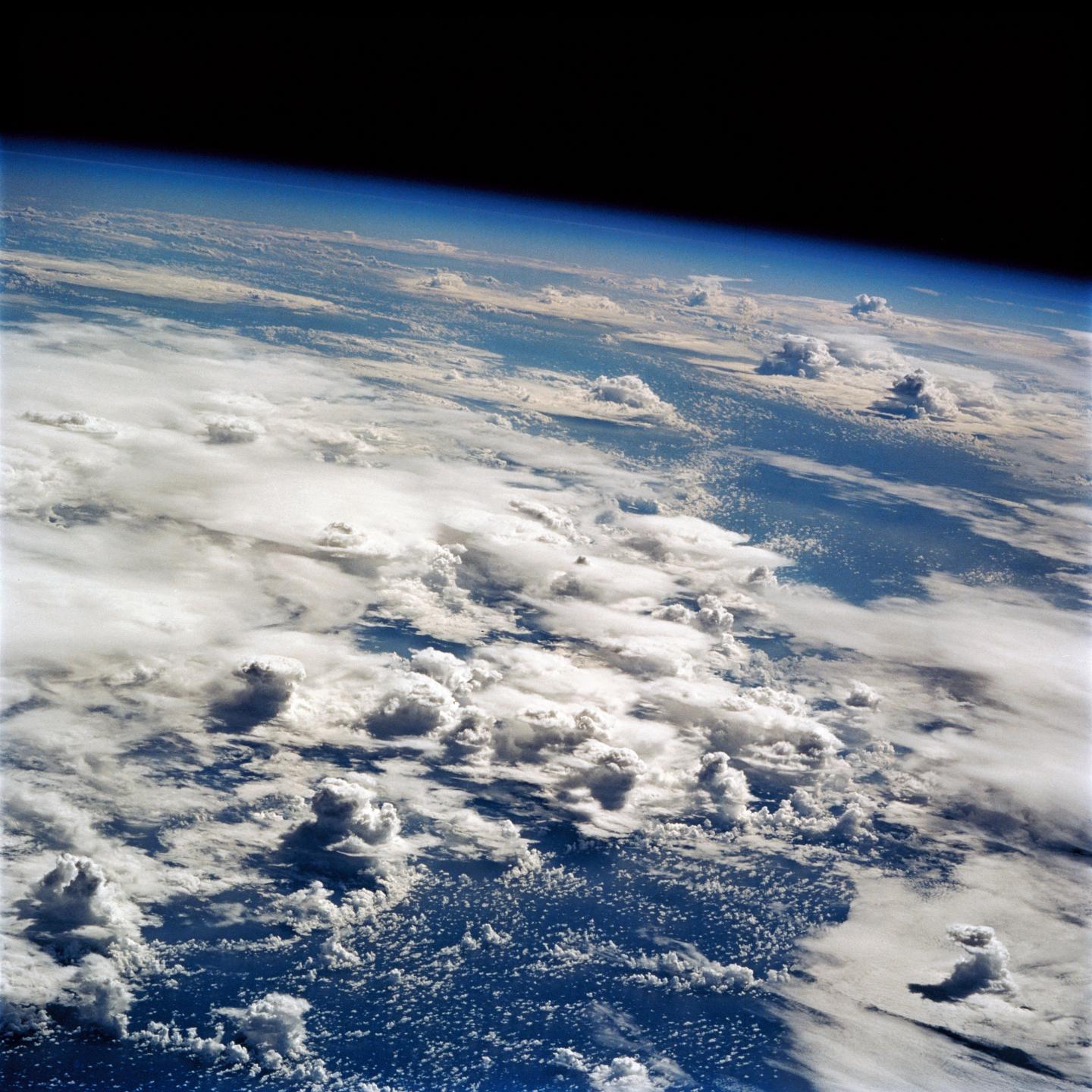 IMAGE: Clouds from deep convection over the tropical Pacific ocean, photographed by the space shuttle. Such convective activity drives the Hadley circulation of the atmosphere.

New York, NY--June 24, 2019--For decades, scientists studying a key climate phenomenon have been grappling with contradictory data that have threated to undermine confidence in the reliability of climate models overall. A new study, published today in Nature Geoscience, settles that debate with regard to the tropical atmospheric circulation.

The Hadley circulation, or Hadley cell--a worldwide tropical atmospheric circulation pattern that occurs due to uneven solar heating at different latitudes surrounding the equator--causes air around the equator to rise to about 10-15 kilometers, flow poleward (toward the North Pole above the equator, the South Pole below the equator), descend in the subtropics, and then flow back to the equator along the Earth's surface. This circulation is widely studied by climate scientists because it controls precipitation in the subtropics and also creates a region called the intertropical convergence zone, producing a band of major, highly-precipitative storms.

The study, headed by Rei Chemke, a Columbia Engineering postdoctoral research fellow, together with climate scientist Lorenzo Polvani, addresses a major discrepancy between climate models and reanalyses regarding potential strengthening or weakening of the Hadley circulation in the Northern Hemisphere as a consequence of anthropogenic emissions.

Historically, climate models have shown a progressive weakening of the Hadley cell in the Northern Hemisphere. Over the past four decades reanalyses, which combine models with observational and satellite data, have shown just the opposite--a strengthening of the Hadley circulation in the Northern Hemisphere. Reanalyses provide the best approximation for the state of the atmosphere for scientists and are widely used to ensure that model simulations are functioning properly.

The difference in trends between models and reanalyses poses a problem that goes far beyond whether the Hadley cell is going to weaken or strengthen; the inconsistency itself is a major concern for scientists. Reanalyses are used to validate the reliability of climate models--if the two disagree, that means that either the models or reanalyses are flawed.

Lead author Chemke, a NOAA Climate and Global Change postdoctoral fellow, explains the danger of this situation, "It's a big problem if the models are wrong because we use them to project our climate and send our results to the IPCC (Intergovernmental Panel on Climate Change) and policy makers and so on."

To find the cause of this discrepancy, the scientists looked closely at the various processes that affect circulation, determining that latent heating is the cause of the inconsistency. To understand which data was correct--the models or the reanalyses--they had to compare the systems using a purely observational metric, untainted by any model or simulation. In this case, precipitation served as an observational proxy for latent heating since it is equal to the net latent heating in the atmospheric column. This observational data revealed that the artifact, or flaw, is in the reanalyses--confirming that the model projections for the future climate are, in fact, correct.

The paper's findings support previous conclusions drawn from a variety of models--the Hadley circulation is weakening. That's critical to understand, says Polvani, a professor of applied physics and applied mathematics and of earth and environmental sciences who studies the climate system at the Lamont-Doherty Earth Observatory. "One of the largest climatic signals associated with global warming is the drying of the subtropics, a region that already receives little rainfall," he explained. "The Hadley cell is an important control on subtropical precipitation. Hence, any changes in the strength of the Hadley cell will result in a change in precipitation in that region. This is why it is important to determine if, as a consequence of anthropogenic emission, the Hadley cell will speed up or slow down in the coming decades."

But these findings resonate far beyond the study in question. Resolving contradictory results in scientific research is critical to maintaining accuracy and integrity in the scientific community. Because of this new study, scientists now have added confidence that models are reliable tools for climate predictions.