As their natural habitats continue to be destroyed, increasing numbers of displaced endangered mammals are taken to sanctuaries and rehabilitation centres worldwide. The ultimate goal of these centres is often reintroduction: to return these animals to wild populations. In a new study published today in Scientific Reports, however, Graham L Banes and Linda Vigilant of the Max Planck Institute for Evolutionary Anthropology in Leipzig, Germany, caution that such reintroductions can act as a form of genetic translocation. By using genetic analysis to assess a subset of historical reintroductions into Tanjung Puting National Park, Indonesia, they found that orang-utans from a non-native and genetically distinct subspecies were unwittingly released and have since hybridized with the Park's wild population. As orang-utan subspecies are thought to have diverged around 176,000 years ago, with marked differentiation over the last 80,000 years, the researchers highlight the potential for negative effects on the viability of populations already under threat.

When Biruté Galdikas and Rod Brindamour began their pioneering orang-utan rehabilitation efforts at Camp Leakey in Tanjung Puting National Park, Central Kalimantan, all orang-utans were considered a single species. Over 14 years, from 1971 to 1985, they released at least 90 orphaned and displaced apes into the surrounding wild population. Advances in morphological and genetic studies have since revealed two species of orang-utan, however, on the islands of Borneo and Sumatra. The Bornean orang-utan is further subdivided into three distinct, geographically and reproductively isolated subspecies, which last shared a common ancestor in the Pleistocene and have differentiated substantially over tens of thousands of years. 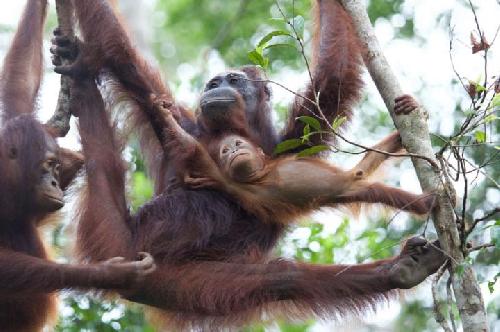 Orangutans at Camp Leakey now carry a 'cocktail' of genes from different subspecies that would not normally exist in the wild. Credit: Graham L. Banes/ MPI for Evolutionary Anthropology

Hybridization in the national park

Using genetic analyses and 44 years of data from Camp Leakey, Banes and Vigilant worked with Galdikas to determine the minimum extent to which she released non-native subspecies into the National Park. They found that Rani and Siswoyo, two females that Galdikas rescued from the pet trade, had originally been captured from northern West Kalimantan or Sarawak, and thus were of the non-local subspecies Pongo pygmaeus pygmaeus. Since their release into Tanjung Puting National Park, the pair have inter-bred prolifically with males of the local subspecies, Pongo pygmaeus wurmbii, producing at least 22 hybridized descendants to date. These offspring inherited a 'cocktail' of genes that could not normally occur in the wild.

Inter-breeding animals from two genetically distinct populations can sometimes lead to 'hybrid vigor', in which offspring reap the benefits of their parents' individual qualities. This could explain how Rani came to found the biggest family of any female reintroduced at Camp Leakey, with at least 14 descendants over three generations. Though two died in infancy, the remainder are presumed to be alive and none are known to have required any veterinary interventions. However, "offspring born to parents from two genetically distinct populations, which have not been in genetic contact for significant periods of time, have also been shown to suffer poor health and reproductive success in a range of different species," said Vigilant.

Strikingly, in stark contrast to Rani, Siswoyo had fewer surviving, healthy offspring than any other female at the site, which might be linked to such 'outbreeding depression'. Her descendants are comparatively few, with only five first-generation and three second-generation offspring. Two of her offspring died in infancy, while infection following the latter pregnancy resulted in Siswoyo's own death ten days after the birth. Her only daughter, Siswi, produced a stillborn offspring, a daughter that died in infancy, and a son that often needed medical interventions. Siswi herself has frequently required veterinary care, including major surgery to treat a perforated intestine.

Reintroduction only after genetic testing

"There is no definitive evidence of outbreeding depression among Bornean orang-utans," says Banes, "but our findings are enough to cause serious alarm." More than 1,500 orphaned and displaced orang-utans are currently awaiting release from centres on Borneo and Sumatra, which missed a deadline set forth by the Indonesian government to reintroduce all their orang-utans by the end of 2015. As their intake of displaced orang-utans increases, and as suitable habitat for reintroductions declines, there have been suggestions that they hybridize Bornean orang-utan subspecies - either in isolated, 'mixed' populations, or within existing wild populations.

Banes and Vigilant advocate genetic testing prior to all reintroductions of displaced animals, in accordance with established international guidelines. While their findings and recommendations apply to a broad range of endangered mammals, Banes is especially adamant that Bornean orang-utan subspecies be kept apart. "They might look roughly the same, but these orang-utans from different subpopulations haven't shared a common ancestor for tens of thousands of years. It may be that inter-breeding them has no ill effects at all, but what if it does? Suddenly, for the sake of short-term welfare, we've compromised the viability of wild populations - and we can never take that back."