Decreased exposure to air pollution in utero is linked with improved childhood developmental and higher levels of brain-derived neurotrophic factor (BDNF), a key protein for brain development, according to a study of looking at the closure of coal-burning power plant in China led by researchers at the Columbia Center for Children's Environmental Health at the Mailman School of Public Health.

The study is the first to assess BDNF and cognitive development with respect to prenatal exposure to polycyclic aromatic hydrocarbons (PAH), a component of air pollution commonly emitted from coal burning. Results appear online in the journal PLOS ONE.

The 2004 closure of a coal-burning power plant in Tongliang, China provided the opportunity to investigate the benefits to development and the impacts on BDNF associated with decreased levels of exposure to PAH. This study has linked decreases in air pollution with decreased levels of PAH-DNA adducts in cord blood, a biological marker of exposure, and reported an association between PAH exposure and adverse developmental outcomes in children born before the plant closure. Currently, coal-fired power plants produce more than 70% of China's electricity.

Deliang Tang, MD, DrPH, and his colleagues followed two groups of mother-child pairs from pregnancy into early childhood. One of the groups was comprised of mothers pregnant while the coal power plant was still open and the other after it closed. Developmental delay was determined using a standardized test, the Gesell Developmental Schedule (GDS), which was adapted for the Chinese population. The GDS assesses children in four areas: motor skills, learned behaviors, language, and social adaptation. 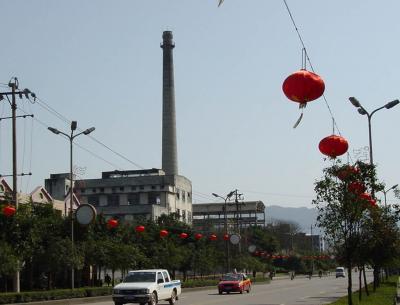 This is Tongliang, China, after the closure of the coal-burning power plant in 2004.

The researchers found that, as hypothesized, decreased PAH exposure resulting from the power plant closure was associated with both increased BDNF levels and increased developmental scores. PAH-DNA adducts were significantly lower in the babies born after the coal power plant shutdown as compared to those born before the closure, indicating a meaningful exposure reduction. Moreover, the researchers found that the mean level of BDNF was higher among children born after the closure of the power plant. The impacts of PAH exposure and BDNF on developmental scores was also analyzed considering all the children, including both the pre- and post-closure groups. Increased scores in the average, motor, and social areas were linked with higher levels of BDNF.

"The key to limiting the health impacts of environmental exposures is policy change supported by scientific evidence. These findings indicate that regulation can rapidly decrease exposure and improve health outcomes among the most sensitive populations, providing support for implementing additional measures such as the closure of the Tongliang coal-fired power plant," says Dr. Tang, director of the China studies at the Columbia Center for Children's Environmental Health and associate professor of Environmental Health Sciences at the Mailman School.

Additionally, the results provide important insight into the relationship between PAH exposure, BDNF, and developmental outcomes, and evidence for BDNF as a marker for the neurodevelopment effects of exposure to air pollution. More research is necessary to determine if the damage caused by environmental exposures, such as PAH, can be mitigated by presence of an enriched environment. 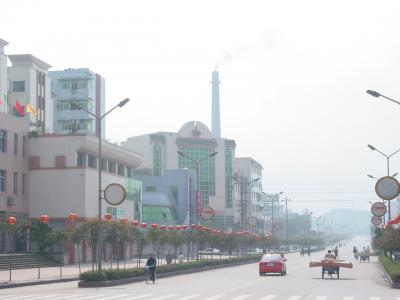 This is Tongliang, China, before the 2004 closure of its coal-burning power plant.