Clues about autism may come from the gut

Bacterial flora inhabiting the human gut have become one of the hottest topics in biological research. Implicated in a range of important activities including digestion, fine-tuning body weight, regulating immune response, and producing neurotransmitters affect that brain and behavior, these tiny workers form diverse communities. Hundreds of species inhabit the gut, and although most are beneficial, some can be very dangerous.

In new research appearing in the journal PLOS ONE, a team led by Rosa Krajmalnik-Brown, a researcher at Arizona State University's Biodesign Institute, present the first comprehensive bacterial analysis focusing on commensal or beneficial bacteria in children with autism spectrum disorder (ASD).

After publishing earlier research exploring crucial links between intestinal microflora and gastric bypass, Krajmlanik-Brown convinced James Adams— director of the ASU Autism/Asperger's Research Program—that similar high throughput techniques could be used to mine the microbiome of patients with autism. (Previously, Adams had been studying the relationship between the gut microbiome and autism using traditional culturing techniques.)

"One of the reasons we started addressing this topic is the fact that autistic children have a lot of GI problems that can last into adulthood," Krajmalnik-Brown says. "Studies have shown that when we manage these problems, their behavior improves dramatically."

Following up on these tantalizing hints, the group hypothesized the existence of distinctive features in the intestinal microflora found in autistic subjects compared to typical children. The current study confirmed these suspicions, and found that children with autism had significantly fewer types of gut bacteria, probably making them more vulnerable to pathogenic bacteria. Autistic subjects also had significantly lower amounts of three critical bacteria, Prevotella, Coprococcus, and Veillonellaceae.

Krajmalnik-Brown, along with the paper's lead authors Dae-Wook Kang and Jin Gyoon Park, suggest that knowledge gleaned through such research may ultimately be used both as a quantitative e diagnostic tool to pinpoint autism and as a guide to developing effective treatments for ASD-associated GI problems. The work also offers hope for new prevention and treatment methods for ASD itself, which has been on a mysterious and rapid ascent around the world.

Autism is defined as a spectrum disorder, due to the broad range of symptoms involved and the influence of both genetic and environmental factors, features often confounding efforts at accurate diagnosis. The diseases' prevalence in children exceeds juvenile diabetes, childhood cancer and pediatric AIDS combined.

Controversy surrounds the apparent explosive rise in autism cases. Heightened awareness of autism spectrum disorders and more diligent efforts at diagnosis must account for some of the increase, yet many researchers believe a genuine epidemic is occurring. In addition to hereditary components, Western-style diets and overuse of antibiotics at an early age may be contributing to the problem by lowering the diversity of the gut microflora.

In terms of severe developmental ailments affecting children and young adults, autism is one of the most common, striking about 1 in 50 children. The disorder—often pitiless and perplexing—is characterized by an array of physical and behavioral symptoms including anxiety, depression, extreme rigidity, poor social functioning and an overall lack of independence. 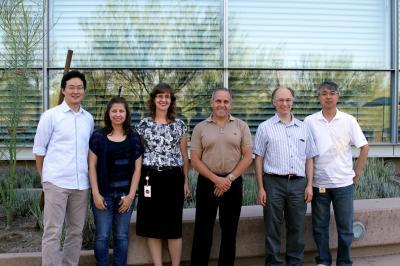 To date, studies of the gut microbiome in autistic subjects have focused primarily on pathogenic bacteria, some of which have been implicated in alterations to brain function. One example involves gram-negative bacteria containing lipopolysaccharides in their cell walls, which can induce inflammation of the brain and lead to the accumulation of high levels of mercury in the cerebrum.

Krajmalnik-Brown and lead author Dae-Wook Kang are researchers in the Biodesign Institute's Swette Center for Environmental Biotechnology, which is devoted to the use of microbial communities for the benefit of human and environmental health. Their new study is the first to approach autism from a different angle, by examining the possible role of so-called commensal or beneficial bacteria.

Up to a quadrillion (1014) bacteria inhabit the human intestine, contributing to digestion, producing vitamins and promoting GI health. Genes associated with human intestinal flora are 100 times as plentiful as the body's human genes, forming what some have referred to as a second genome. Various environmental factors can destabilize the natural microbiome of the gut, including antibiotics and specific diets.

In the current study, a cohort of 20 healthy and 20 autistic subjects between 3 and 16 years of age were selected and their gut microflora from fecal samples analyzed by means of a technique known as pyrosequencing. Pyrosequencing is a high-throughput method, allowing many DNA samples to be combined as well as many sequences per sample to be analyzed.

Lower diversity of gut microbes was positively correlated with the presence of autistic symptoms in the study. The authors stress that bacterial richness and diversity are essential for maintaining a robust and adaptable bacterial community capable of fighting off environmental challenges. "We believe that a diverse gut is a healthy gut," Krajmalnik-Brown says.

The new study detected decreased microbial diversity in the 20 autistic subjects whose fecal samples were analyzed. Specifically, three bacterial genera—Prevotella, Coprococcus and Veillonellaceae—were diminished in subjects with autism, when compared with samples from normal children. (Surprisingly, these microbial changes did not seem directly correlated with the severity of GI symptoms.)

The three genera represent important groups of carbohydrate-degrading and/or fermenting microbes. Such bacteria could be critical for healthy microbial-gut interactions or play a supportive role for a wide network of different microorganisms in the gut. The latter would explain the decreased diversity observed in autistic samples.

Bacteria: in sickness and in health

Among the fully classified genera in the study, Prevotella was the most conspicuously reduced in autistic subjects. Prevotella is believed to play a key role in the composition of the human gut microbiome. For this reason, the group undertook a sub-genus investigation of autistic subjects. They found that a species known as Prevotella copri occurred only in very low levels in the autistic samples. The species is a common component in normal children exhibiting more diverse and robust microbial communities.

"We think of Prevotella as a healthy, good thing to have," Krajmalnik-Brown notes. (Michael Polan's recent New York Times Magazine story on the microbiome points to the fact that he is proud that his gut microbiome is rich in Prevotella regarding it as a possible sign of a healthy non-Western diet.)

Jin Gyoon Park (the other lead author), who works in the Virginia G. Piper Center for Personalized Diagnostics, under Joshua LaBaer's direction, conducted a rigorous bioinformatic and statistical analysis of the intestinal microflora. He believes that the microbiome can be mined in future work to find diagnostic biomarkers for autism and many other diseases. Quantitative diagnoses of this sort have so far been lacking for autism, a disease for which subjective behavior indices are typically used to identify the disorder.

In describing the next steps for the research group, Kang and Park point to more detailed, gene-level analyses aimed at probing bacterial function and further illuminating relationships between human health and the complexities of the microbiome. Additionally, the group will use the current results as a guide for new treatment studies for autism aimed at modifying bacterial composition in the gut.

This is an infographic about intestinal flora and autism.