PROVIDENCE, R.I. [Brown University] — The end of the Norse settlements on Greenland likely will remain shrouded in mystery. While there is scant written evidence of the colony's demise in the 14th and early 15th centuries, archaeological remains can fill some of the blanks, but not all.

What climate scientists have been able to ascertain is that an extended cold snap, called the Little Ice Age, gripped Greenland beginning in the 1400s. This has been cited as a major cause of the Norse's disappearance. Now researchers led by Brown University show the climate turned colder in an earlier span of several decades, setting in motion the end of the Greenland Norse. Their findings appear in Proceedings of the National Academy of Sciences.

The Brown scientists' finding comes from the first reconstruction of 5,600 years of climate history from two lakes in Kangerlussuaq, near the Norse "Western Settlement." Unlike ice cores taken from the Greenland ice sheet hundreds of miles inland, the new lake core measurements reflect air temperatures where the Vikings lived, as well as those experienced by the Saqqaq and the Dorset, Stone Age cultures that preceded them.

"This is the first quantitative temperature record from the area they were living in," said William D'Andrea, the paper's first author, who earned his doctorate in geological sciences at Brown and is now a postdoctoral researcher at the University of Massachusetts–Amherst. "So we can say there is a definite cooling trend in the region right before the Norse disappear."

"The record shows how quickly temperature changed in the region and by how much," said co-author Yongsong Huang, professor of geological sciences at Brown, principal investigator of the NSF-funded project, and D'Andrea's Ph.D. adviser. "It is interesting to consider how rapid climate change may have impacted past societies, particularly in light of the rapid changes taking place today." 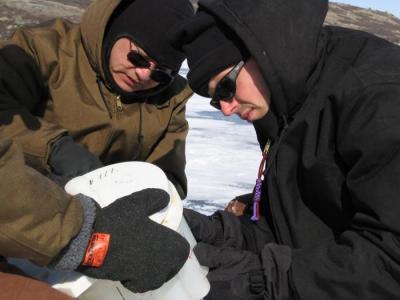 D'Andrea points out that climate is not the only factor in the demise of the Norse Western Settlement. The Vikings' sedentary lifestyle, reliance on agriculture and livestock for food, dependence on trade with Scandinavia and combative relations with the neighboring Inuit, are believed to be contributing factors.

Still, it appears that climate played a significant role. The Vikings arrived in Greenland in the 980s, establishing a string of small communities along Greenland's west coast. (Another grouping of communities, called the "Eastern Settlement" also was located on the west coast but farther south on the island.) The arrival coincided with a time of relatively mild weather, similar to that in Greenland today. However, beginning around 1100, the climate began an 80-year period in which temperatures dropped 4 degrees Celsius (7 degrees Fahrenheit), the Brown scientists concluded from the lake readings. While that may not be considered precipitous, especially in the summer, the change could have ushered in a number of hazards, including shorter crop-growing seasons, less available food for livestock and more sea ice that may have blocked trade.

"You have an interval when the summers are long and balmy and you build up the size of your farm, and then suddenly year after year, you go into this cooling trend, and the summers are getting shorter and colder and you can't make as much hay. You can imagine how that particular lifestyle may not be able to make it," D'Andrea said.

Archaeological and written records show the Western Settlement persisted until sometime around the mid-1300s. The Eastern Settlement is believed to have vanished in the first two decades of the 1400s.

The researchers also examined how climate affected the Saqqaq and Dorset peoples. The Saqqaq arrived in Greenland around 2500 B.C. While there were warm and cold swings in temperature for centuries after their arrival, the climate took a turn for the bitter beginning roughly 850 B.C., the scientists found. "There is a major climate shift at this time," D'Andrea said. "It seems that it's not as much the speed of the cooling as the amplitude of the cooling. It gets much colder."

The Saqqaq exit coincides with the arrival of the Dorset people, who were more accustomed to hunting from the sea ice that would have accumulated with the colder climate at the time. Yet by around 50 B.C., the Dorset culture was waning in western Greenland, despite its affinity for cold weather. "It is possible that it got so cold they left, but there has to be more to it than that," D'Andrea said.