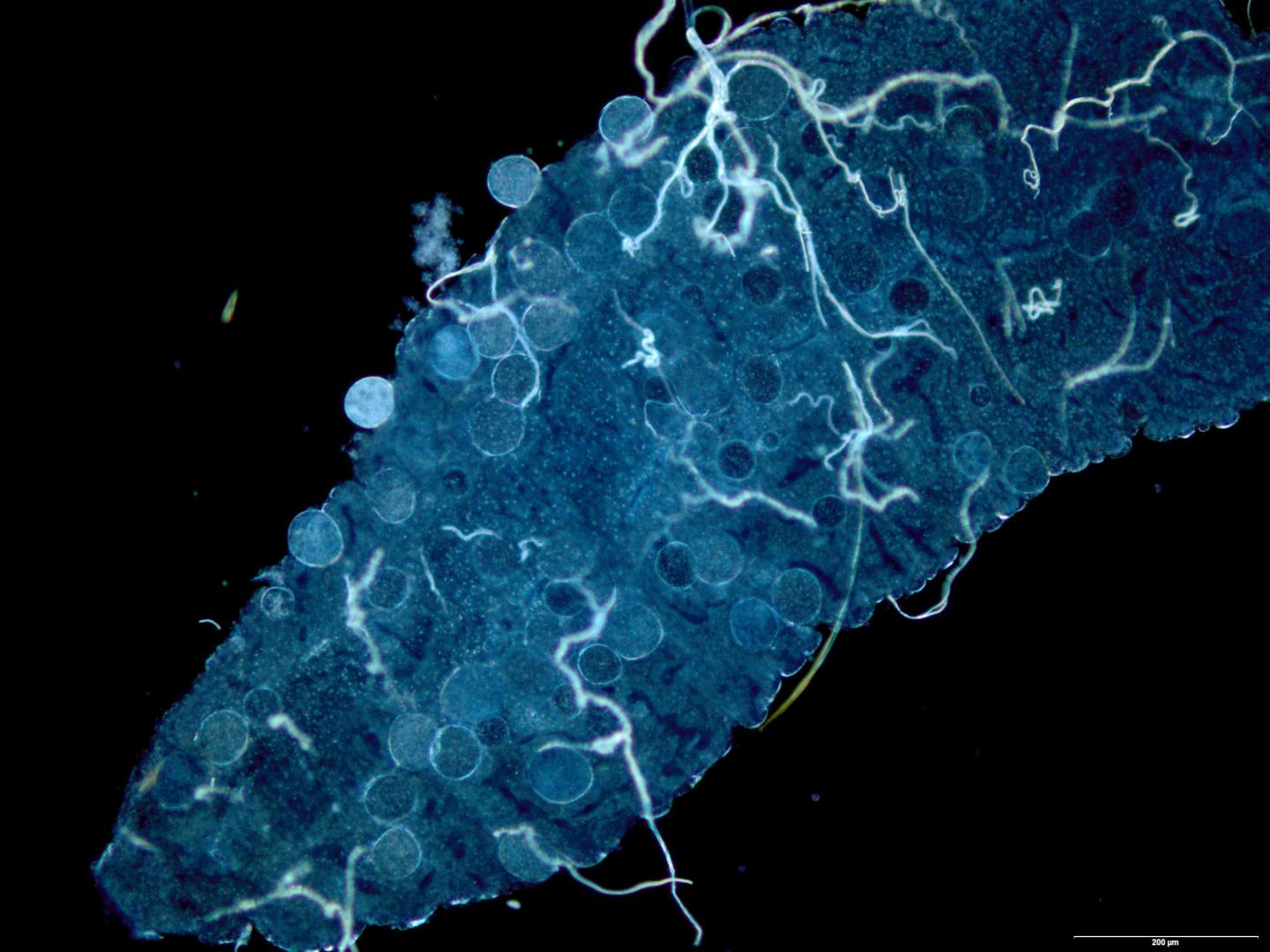 IMAGE: A microscope view of the midgut of an Anopheles stephensi mosquito infected with malaria parasites (the round circles). The researchers found that malaria parasites develop faster in mosquitoes at lower...

UNIVERSITY PARK, Pa. -- Malaria parasites develop faster in mosquitoes at lower temperatures than previously thought, according to researchers at Penn State and the University of Exeter. The findings suggest that even slight climate warming could increase malaria risk to hundreds of thousands, if not millions, of people -- including travelers -- in areas that are currently too cold for malaria parasites to complete their development.

According to Thomas, previous work suggested that in cooler temperatures malaria parasites developed too slowly to be transmitted to people during mosquitoes' lifetimes. That work, he said, was conducted almost 100 years ago using a Russian species of mosquito.

"Our study is the first since the 1930s to investigate the relationship between temperature and malaria parasite development," said Thomas. "Our results challenge this long-standing model in malaria biology."

The researchers used two of the most important malaria-hosting mosquito species in the world -- Anopheles stephensi and Anopheles gambiae -- to conduct their experiments. They maintained these malaria-infected mosquitoes in the laboratory under a variety of temperatures ranging from 16 to 20 degrees Celsius, or 60 to 68 degrees Fahrenheit. They maintained a separate control set of mosquitoes at 27 degrees Celsius, or about 80 degrees Fahrenheit, which is the temperature at which malaria transmission is typically highest.

In addition, the team varied the daily temperatures by 10 degrees Celsius -- 5 degrees Celsius above and below the daily mean -- since such variation in temperature is common in natural settings when it is cooler at night and warmer in the daytime. The findings appear in the June 26 issue of Biology Letters.

The traditional model estimates that parasites in the mosquito take 56 days to develop at temperatures just above the minimum threshold for development -- a cool 18 degrees Celsius, or 64 degrees Fahrenheit. However, the current study shows that as few as 31 days are required for such development for Anopheles stephensi.

The researchers also found that variation in temperature at this cooler end of the range promotes faster parasite development. Parasites developed in as few as 27 days at 18 degrees Celsius, or 64 degrees Fahrenheit, under realistic variable temperature conditions.

"Our work shows that even small increases in temperature could dramatically increase malaria infections in humans because the parasites develop much faster at these lower temperatures than has been previously estimated," said Jessica Waite, senior scientist, Penn State. "Parasite development rate further increases when temperatures fluctuate naturally, from cooler at night to warmer in the day."

According to Waite, the findings have implications for potentially millions of people living in the higher elevations of Africa, such as the Kenyan and Ethiopian highlands, and in South America.

"As temperatures increase with climate change, infectious mosquitoes in areas surrounding mountains, for example, may be able to transmit the parasite higher up the mountains than they have in the past," she said. "Our results suggest that small rises in temperature could lead to greater increases in transmission risk than previously thought."