It's a simple, transparent acrylic plate – nothing embedded within it and nothing printed on its surface. Place it at a certain angle between a white wall and a light source, and a clear, coherent image appears of the face of Alan Turing, the famous British mathematician and father of modern computer science.

There's no magic here; the only thing at work is the relief on the plaque's surface and a natural optical phenomenon known as a "caustic," which researchers in EPFL's Computer Graphics and Geometry Laboratory have succeeded in bending to their will. Their research was presented recently at the Advances in Architectural Geometry Conference in Paris.

"With the technique that we've developed, we can compose any image we want, from a simple form such as a star to complex representations such as faces or landscapes," explains EPFL professor Mark Pauly, head of the laboratory, who conducted the study with four other scientists*.

This "caustic" effect is well known and easy to observe; a bit of sunlight shining on a pool of water produces patterns that dance on the surrounding tiles or walls. These undulating lines, apparently random, are generated by light that hits the moving surface of a pool or puddle. This effect, which is very mobile and dynamic in liquid, produces static patterns with solid transparent materials such as glass or transparent acrylic (better known as Plexiglass). 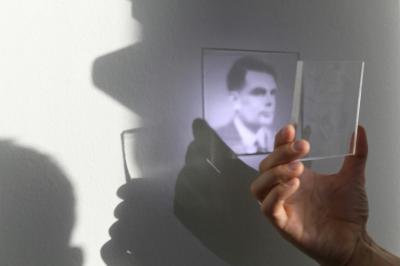 Researchers at EPFL found a way to control "caustics", patterns that appear when light hits a water surface or a transparent material. Thanks to an algorithm, they can shape a transparent object so that it reflects a coherent image.

Scientifically, this phenomenon can be explained by light refraction. When light rays hit a transparent surface, they continue their trajectory but are bent as a function of the surface geometry and optical properties of the material. The light passing through is thus not uniformly distributed. It gets concentrated in certain points, forming some zones that are more intense and others that are more shaded.

Pauly and his colleagues studied the principles of this distribution, and were able to identify the curves and undulations they would need to give to the surface in order to direct the beams of light to a desired area. They then developed an algorithm to calculate the trajectories very precisely and thus form a specific image.

One of the most interesting and eagerly awaited applications of this method is in architecture. It could be applied to display cases, windows, fountains, and ornamentations on museums and monuments. In design it could be used for decorating glasses, vases, carafes, jewelry and many other objects. It has considerable potential in other, more technical applications as well, such asautomobile headlights and projectors.