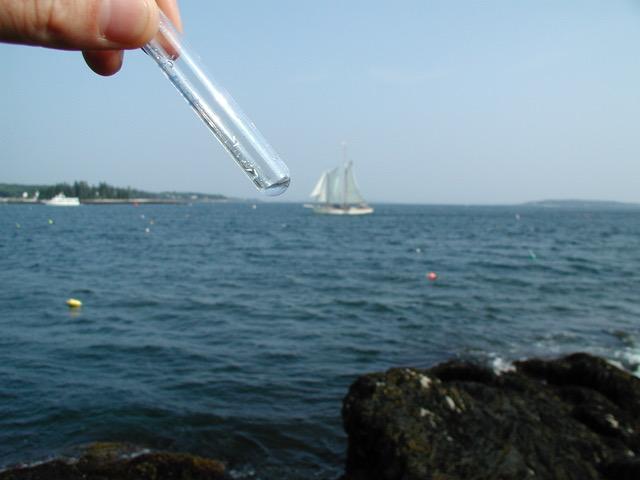 IMAGE: Sampling seawater in the Gulf of Maine.

Viruses occur in astronomic numbers everywhere on Earth, from the atmosphere to the deepest ocean. Surprisingly, considering the abundance and nutrient-richness of viruses, no organisms are known to use them as food. In Frontiers in Microbiology, researchers publish the first compelling evidence that two groups of ecologically important marine protists, choanozoans and picozoans, are virus eaters, catching their "prey" through phagocytosis (i.e. engulfing).

"Our data show that many protist cells contain DNA of a wide variety of non-infectious viruses but not bacteria, strong evidence that they are feeding on viruses rather than on bacteria. That came as a big surprise, as these findings go against the currently predominant views of the role of viruses and protists in the marine food webs," says corresponding author Dr Ramunas Stepanauskas, Director of the Single Cell Genomics Center at Bigelow Laboratory for Ocean Sciences in East Boothbay, Maine, USA.

Stepanauskas and colleagues sampled surface seawater from two sites: the Northwestern Atlantic in the Gulf of Maine, USA in July 2009, and the Mediterranean off Catalonia, Spain in January and July 2016. They used modern single-cell genomics tools to sequence the total DNA from 1,698 individual protists in the water. Each of the resulting Single Amplified Genomes (SAGs) consists of the genome of a single protist, with or without associated DNA: for example, from symbionts, ingested prey, or viruses or bacteria sticking to its exterior. The technique is very sensitive, but doesn't directly show the type of relationship between a protist and its associates.

But choanozoans and picozoans, which only occurred in the Gulf of Maine sample, were different. These groups, neither of which have chloroplasts, are poorly known. Choanozoans (3-10 μm; also known as choanoflagellates), are of great evolutionary interest as the closest living relatives of animals and fungi. The tiny (up to 3 μ) picozoans were first discovered twenty years ago and originally known as picobiliphytes. Until now, their food sources were a puzzle, as their feeding apparatus is too small for bacteria - but ample for viruses, most of which are smaller than 150 nm.

Every single one of the choanozoan and picozoan SAGs were associated with viral sequences from bacteriophages and CRESS-DNA viruses, but mostly without any bacterial DNA, while the same sequences were found across a great diversity of species.

"It is very unlikely that these viruses are capable of infecting all the protists in which they were found," says Dr Julia Brown, a researcher at the Bigelow Laboratory for Ocean Sciences and coauthor on the study.

"Viruses are rich in phosphorus and nitrogen, and could potentially be a good supplement to a carbon-rich diet that might include cellular prey or carbon-rich marine colloids," says Brown. "The removal of viruses from the water may reduce the number of viruses available to infect other organisms, while also shuttling the organic carbon within virus particles higher up the food chain. Future research might consider whether protists that consume viruses accumulate DNA sequences from their viral prey within their own genomes, or consider how they might protect themselves from infection."