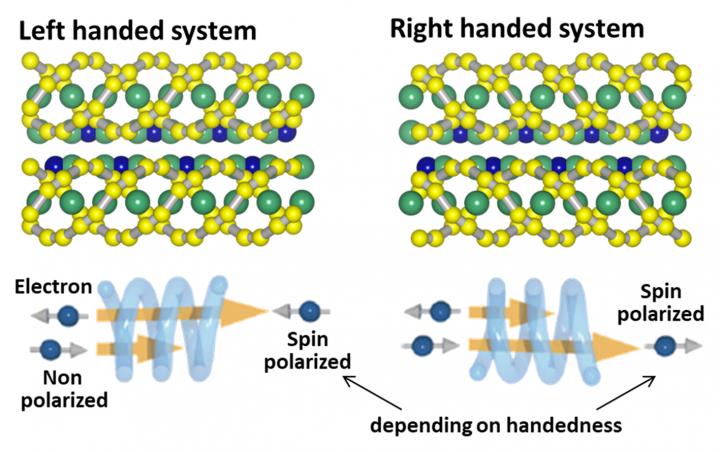 When looking at a left hand in the mirror, it looks like a right hand. However, the left hand never overlaps the right hand. Such a geometrical relationship that an image of the object in a plane mirror cannot be brought to coincide with itself is called chirality. A clockwise or counterclockwise helical staircase is an example of a chiral structure. On the other hand, a round ball is not chiral since its image in a mirror overlaps the original shape.

The structure of a material which consists of atoms and/or molecules may exhibit chirality. It is known that chiral molecules or chiral crystals show a chiral structure, as exemplified by deoxyribonucleic acid (DNA), amino acids, and sugars. Such chiral substances are inevitable in living activity. However, their electrical and magnetic characteristics have attracted little attention so far.

Recently, it was found by Ron Naaman et al. in Israel that electron spins orient in the same direction when electrons pass through chiral molecules such as DNA. Because the direction of spins depends on the handedness of a chiral molecule structure, this phenomenon is called chirality-induced spin selectivity (CISS).

CISS research clarified that non-magnetic chiral molecules make electrons spin polarized. This phenomenon is very puzzling and its mechanism remains to be clarified. To produce a spin-polarized state in a non-magnetic material is an important research target to promote the next generation electronics and quantum science. It is very interesting to investigate how universal the spin-polarized phenomena are in chiral materials widely found in molecules and crystals.

In this study, the researchers at Osaka Prefecture University, Institute for Molecular Science, The Open University of Japan, and Toho University focused not a chiral molecule but a 'chiral crystal'. The chiral crystal that the researchers have investigated possesses a helical arrangement of atoms twisting in one direction. Such a helical structure appears all over the chiral crystal, as shown in upper panel of Figure. Although molecules are very tiny invisible entities, crystals are large enough to be handled. The crystals also exhibit fabrication feasibility and material stability in usual cases.

A chiral crystal CrNb3S6 used in this study is a metal that conducts electricity well but exhibits no magnetism at room temperature in the absence of magnetic field. However, the experiments clarified that electrons flowing in CrNb3S6 are spin polarized. Namely, the chiral crystal plays a role to make the spins of flowing electrons aligned in the same direction spontaneously.

Applying an electrical current into the coil found in our daily life induces magnetic fields in the coil. This is a macroscopic electromagnet generating macroscopic magnetic fields. A helical atomic configuration found in the crystals plays a role to generate polarized spins. Namely, it behaves as a 'microscopic' electromagnet generating polarized spin in the microscopic tiny world.

This study clarified that spin-polarized phenomena initially found in chiral molecules occur even in chiral solid crystals, suggesting that such phenomena appear universally in a wide range of chiral materials from chiral molecules to chiral crystals. The study made a fundamental and significant contribution to the research field of spin manipulation and detection in combination with chiral systems.