HANOVER, N.H. - China's anti-logging, conservation and ecotourism policies are accelerating the loss of old-growth forests in one of the world's most ecologically fragile places, according to studies led by a Dartmouth College scientist.

The findings shed new light on the complex interactions between China's development and conservation policies and their impact on the most diverse temperate forests in the world, in "Shangri-La" in northwest Yunnan Province. Shangri-La, until recently an isolated Himalayan hinterland, is now the epicenter of China's struggle to wed sustainable economic development with environmental protection. The province is known for its scenic, ecological and ethnic diversity, but it also is one of the poorest regions in China, populated by indigenous subsistence cultures that rely on forests for their livelihoods. The province was largely undisturbed until the 1950s when state logging companies started clear-cutting old-growth forests to fuel China's national economic boom. But catastrophic flooding along the Yangtze River in the 1990s prompted the Chinese government to implement multiple forest protection policies, including nature reserves, a commercial logging ban, reforestation programs and ecotourism, as a sustainable development strategy. The logging ban prohibits commercial timber harvesting, but allows logging by local people on a quota basis.

In a new study in the journal Biological Conservation, researchers used satellite imagery and statistical analysis to evaluate three overlapping forest conservation strategies -- protected areas, a commercial logging ban and Tibetan sacred forests - in northwest Yunnan Province. The results show that protected-area status conserved old-growth forests, while the logging ban increased total forest cover but accelerated old-growth logging in sacred forests. The sacred forests have effectively protected old-growth trees from clear-cutting for centuries despite major upheavals in the region's history, including the logging era and the Cultural Revolution. But recent official environmental protection policies have displaced these ancient community-managed protections. In a related 2012 study in the journal Remote Sensing of Environment, researchers used three decades of satellite imagery to measure rates and patterns of old-growth deforestation in response to the environmental protection and sustainable development policies. The results, surprisingly, showed that old-growth logging accelerated: old-growth forests covered 26 percent of the area in 1990 but only 20 percent in 2009. And, paradoxically, old-growth forest loss occurred most rapidly where ecotourism was most prominent. "Our results show that the negative impacts of ecotourism-based economic development on the environment outweighed conservation efforts," says lead author Jodi Brandt, a postdoctoral researcher at Dartmouth and formerly at the University of Wisconsin-Madison and University of Michigan. 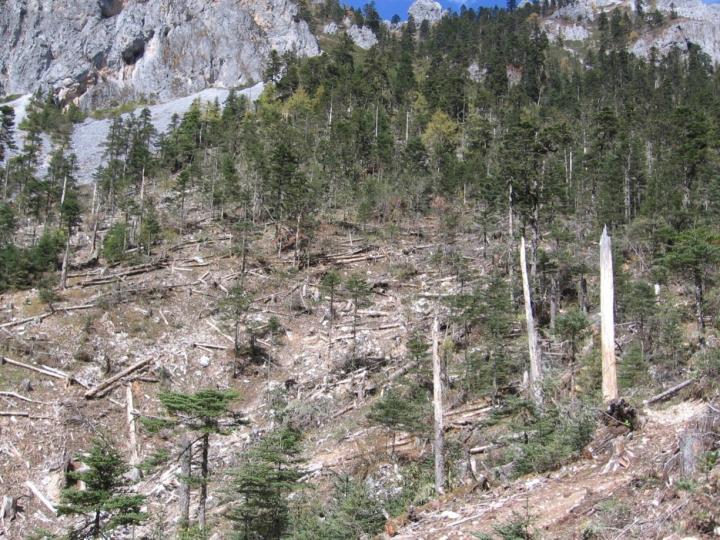 Dartmouth research shows China's anti-logging, conservation and ecotourism policies are accelerating the loss of old-growth forests in the Himalayas.

Taken together, the two studies suggest the burgeoning tourism industry has increased demand for old-growth timber, and that official conservation policies displaced logging to sacred areas. "Tourism development continues to expand into remote regions in northwest Yunnan and the negative impacts observed near Shangri-La City in the last decade may soon follow," Brandt says. As for displacing deforestation pressure to sacred areas: "China's policy currently favors strong environmental protection in this region, but it's hard to say whether the government protections will still be in place in 10, 20, or 50 years. The fact that potentially temporary government policies are displacing centuries-old community-based forms of environmental management has worrisome consequences. Our research highlights a need for increased understanding of interactions among government policies and local forms of land management. One unique aspect of these studies is the emphasis on using satellite imagery to measure change in different forest types. The analysis discriminated old-growth forests from pine and scrub forests, and when all forest types were lumped together, results indicated that total forest cover increased. However, new forests were primarily scrub and secondary forests, which typically regenerate after old-growth logging but have much lower biodiversity value. The results highlight that even though most satellite-based studies consider total forest cover as the sole indicator of success, lumping all forests together can lead to misleading conclusions about the effectiveness of biodiversity conservation strategy."

In a related 2013 study in the journal Biological Conservation, Brandt and her colleagues reported that northwest Yunnan's old-growth sacred forests are critical for forest birds in the Himalayas, where more threatened bird species live than anywhere else in the world. The province is a major migratory flyway for many bird species, including some that live nowhere else, but its bird population is one of the least understood on the planet and little is known about the role of sacred forests in bird and biodiversity conservation. Several ethnic minority groups maintain hundreds of sacred forests, which range from a few acres to thousands of square miles, as part of their religion. The researchers observed 81 bird species across 62 plots within and outside six Tibetan sacred forests. They found that sacred forests support a richer collection of bird species and more total birds than the surrounding areas. The plots with the largest-diameter trees and native bamboo groves have the highest bird diversity. More birds used the sacred forests and their edges during 2010, a severe drought year in Yunnan, suggesting sacred forests serve as refuges during extreme weather years. "Our results strongly indicate that protecting old-growth forest ecosystems is important for Himalayan forest birds and that sacred forests protect a variety of habitat niches and increase bird diversity," says Brandt. The results also suggested the remaining patches of native old-growth sacred forests could be incorporated into official conservation strategies and form the backbone of an expanded natural protected area system. Environmentalists have suggested such a strategy in China and other nations where sacred natural areas function as de facto protected natural areas. China's national protected area system has expanded greatly in recent years, but the areas are typically remote, at higher elevations and ineffectively managed, while sacred forests are closer to centers of human land use, at lower-elevations and managed effectively at the community level. But Brandt's 2014 follow-up study with Tibetan villagers in northwest Yunnan suggest such a strategy wouldn't work because they value the sacred forests primarily for religious reasons rather than conservation. 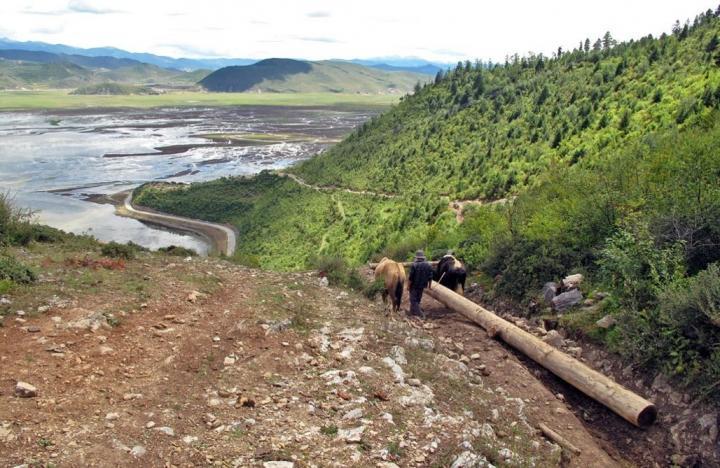 A logger removes a tree from China's old-growth Himalaya forests, which are rapidly disappearing despite government policies.