Children with ADHD find medication frees them to choose between right and wrong, study suggests

Children living with attention deficit hyperactivity disorder (ADHD) tend to feel that they benefit from medication to treat the condition and do not feel that the medication turns them into 'robots', according to a report published today. In fact, they report feeling that medication helps them to control their behaviour and make better decisions. The study, which gives a voice to the children themselves, provides valuable insights into their experiences and the stigma they face.

The ADHD VOICES – Voices on Identity, Childhood, Ethics and Stimulants – study has worked with 151 families in the UK and US to examine ethical and societal issues surrounding ADHD, and in particular the use of treatments such as methylphenidate (Ritalin). The project has been led by biomedical ethicist Dr Ilina Singh from King's College London and was funded by the Wellcome Trust.

Dr Singh and colleagues interviewed children and their families about ADHD, behaviour, medication and identity across four contexts – home, school, doctor's office and peer group. The findings of their study, which are announced today, are accompanied by a series of short films by award-winning animators The Brothers McLeod. The report is intended not only to highlight ethical and social issues surrounding ADHD, but also to help families, doctor, teachers and the children themselves to understand from a child's perspective what it is like to live with ADHD.

"ADHD is a very emotive subject which inspires passionate debate. Everyone seems to have an opinion about the condition, what causes it, how to deal with children with ADHD, but the voices of these children are rarely listened to," explains Dr Singh. "Who better to tell us what ADHD is like and how medication affects them than the children themselves?"

Dr Singh points to the controversies surrounding providing medication to children with ADHD, which some people argue turns the children into 'robots'. She believes that in many cases and with a correct diagnosis, treating with stimulants is appropriate and beneficial, particularly if complemented by other interventions. The evidence from the children that she interviewed suggests that they see medication as improving their ability to make their own moral choices.

Glenn, aged 10 from the US, says: "If you're like driving in a car, and like, there's two different ways, and you usually always go this way…and then one day you want to go the other way, but… the ADHD acts as like a blocker, so you can't… It [the medicine] opens the blocker so that you can go [the right] way. But you still have the choice of going the wrong way… It's harder [without medication], that's what's the truth. But it's not like [on medication] you're a robot..." 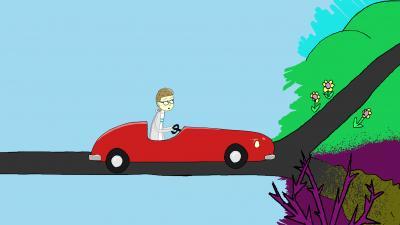 This is a still from the animated film ADHD and Me, illustrating moral choices.

Dr Singh also found that children often did not understand their condition or why they were receiving medication. Many children in the study reported that they had little meaningful contact with their doctors. After the initial evaluation, clinic visits tended to focus on side-effect checks during which children were weighed and measured. Most children were not asked any questions during these visits.

Roger, age 13, from the UK, says: "I've only just started going to the ADHD clinic, but I haven't actually been to it properly, like, I've seen the doctor and he's talked about [ADHD] and I get weighed.. But ... they don't, they'll just say like, parts of what it is but then, like, they'll stop, so they will only say some of it and then, like change the subject."

The report concludes with a series of recommendations for how parents, doctors and teachers can help children cope with and better understand their condition, and begin to tackle the stigma that currently exists around the condition.

Professor Peter Hill, a child and adolescent psychiatrist, says: "We hope that the VOICES Study and the ADHD and Me animations will inspire people to think differently about ADHD, drug treatments and children with behavioural difficulties. Behaving differently around these children is the main challenge. We hope that the strategies we have outlined will help improve the interactions with these children and help improve their lives."

Clare Matterson, Director of Medical Humanities and Engagement at the Wellcome Trust, comments: "It is refreshing to hear the voices of children included in the debate about ADHD. It is a very emotive subject and despite the fact that these children are at the centre of this debate, they are too often ignored. This report sends a clear message to doctors, teachers and parents about the importance of talking to children about their condition – and more importantly, listening to what they have to say."