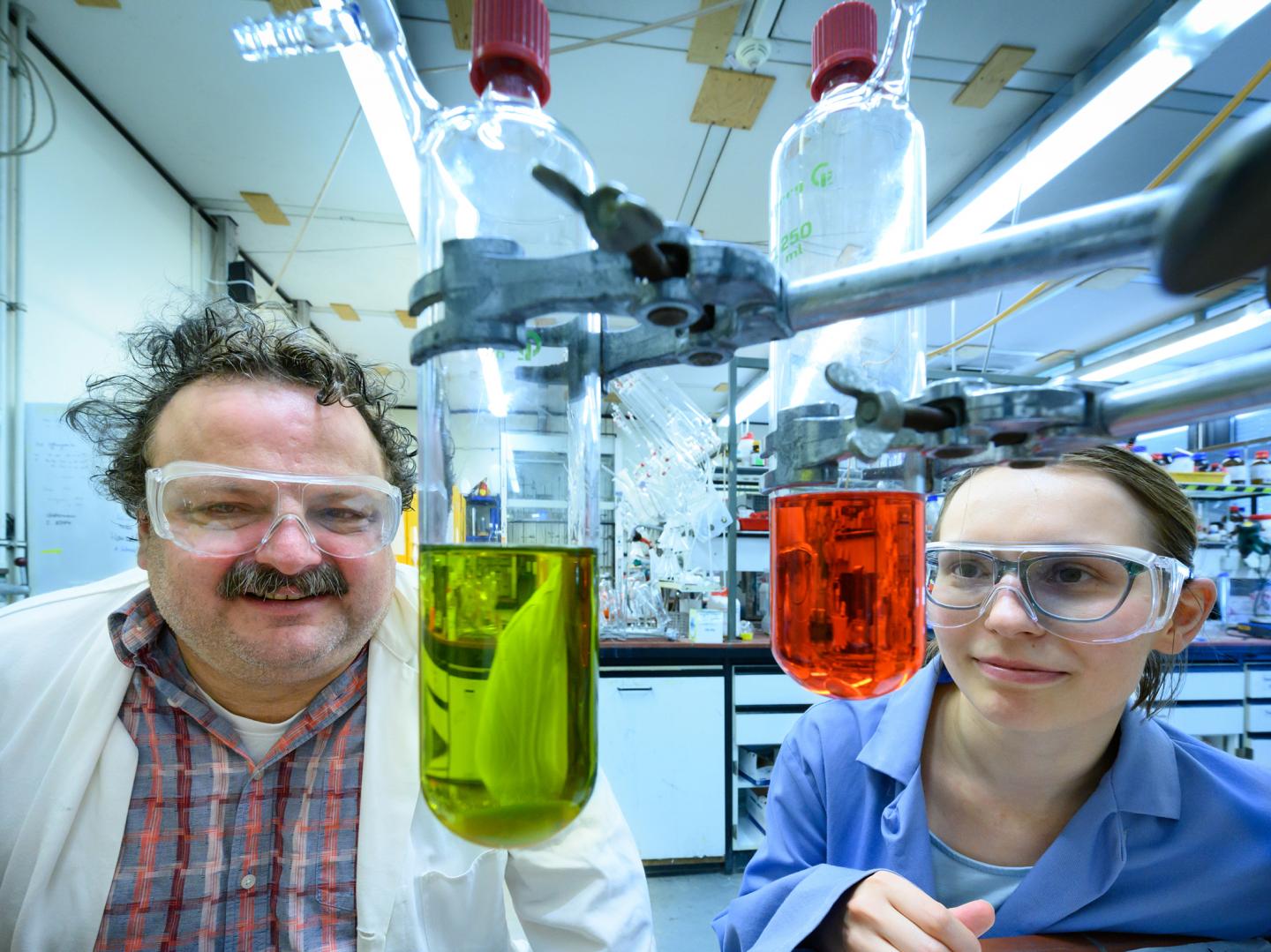 IMAGE: Dr. Andreas Gansäuer and Anastasia Panfilova during epoxy hydrogenation at the Kekulé Institute of Organic Chemistry and Biochemistry at the University of Bonn.

Chemists from the University of Bonn and their US colleagues at Columbia University in New York have discovered a novel mechanism in catalysis. It allows the synthesis of certain alcohols more cheaply and environmentally friendly than before. The reaction follows a previously unknown pattern in which hydrogen is split into three components in a time-coordinated manner. More than five years passed between the idea and its practical realization. The results are published in the prestigious journal Science.

Alcohols are common chemical compounds which, in addition to carbon and hydrogen, contain at least one OH group. They serve as starting materials for a whole series of chemical syntheses and are often produced directly from olefins by addition of water (chemical formula: H2O). Olefins are hydrocarbons with a double bond available from oil. The water molecule serves as a "donor" of the OH-group characteristic of alcohols.

This synthesis is simple and efficient, but it has a decisive disadvantage: It can only be used to produce certain alcohols, the so-called "Markovnikov alcohols". The OH group cannot simply be attached to any position of the olefin - one of two positions is excluded. "We have now found a new catalytic method that can produce exactly these 'impossible' alcohols," explains Prof. Dr. Andreas Gansäuer.

Gansäuer works at the Kekulé Institute of Organic Chemistry and Biochemistry at the University of Bonn. The idea for the new synthesis emerged in 2013 in a collaboration with the group of Prof. Dr. Jack Norton of Columbia University in New York. However, it took almost five years until the synthesis of the so-called "anti-Markovnikov alcohol" using the new catalytic system worked well enough to be published.

Acceleration and slowing down by the catalysts' ligands

The fact that the two groups succeeded in making it into the renowned journal Science is due to the unusual reaction mechanism. Epoxides, common and valuable intermediate products of the chemical industry, serve as starting materials. Epoxides can be produced by adding an oxygen atom (chemical symbol: O) to olefins. If they are allowed to react with hydrogen molecules (H2), the oxygen becomes an OH group. Normally, with this approach only Markovnikov alcohols are produced.

"In our reaction, however, we successively transfer the hydrogen in three parts," explains Gansäuer. "First a negatively charged electron, then a neutral hydrogen atom and finally a positively charged hydrogen ion, a proton. We use two catalysts, one of which contains titanium and the other chromium. "This allows us to convert epoxides into anti-Markovnikov alcohols." The timing of the entire process must be strictly coordinated - like in juggling, where each ball has to maintain a specified flight duration. To achieve this, the chemists had to synchronize the speed of three catalytic reactions. To this end, they attached the 'right' ligands, molecules that control the metals' reactivity, to the titanium and chromium atoms.

Until now, anti-Markovnikov alcohols have been produced through a so-called hydroboration followed by an oxidation. However, this reaction is relatively complex and not particularly sustainable. The new mechanism, on the other hand, does not produce any by-products and is thus practically waste-free. "Titanium and chromium are also very common metals, unlike many other noble metals that are often used in catalysis," Gansäuer emphasizes.

In 2013, Norton and Gansäuer submitted their idea to a call for proposals on sustainable catalysis by the International Union of Pure and Applied Chemistry (IUPAC), winning first place. The project was largely financed with the grant money. "But the good cooperation within my institute has certainly also contributed to the success," emphasizes Gansäuer. "For instance, I had access not only to the institute's resources, but also to equipment of the other groups from Bonn."