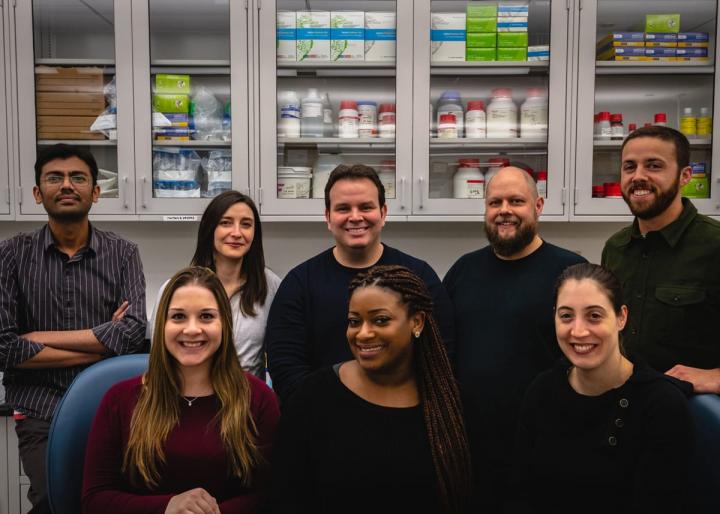 IMAGE: Jason Butler (top center) and members of his team published their latest findings on inflammation pathways in the bone marrow which could open up some cancer treatment pathways, especially for...

February 12, 2020, Nutley, NJ - Reversing runaway inflammation in the bone marrow could lead to major breakthroughs in treatments for some blood cancers, according to a new publication by scientists at Hackensack Meridian Health's Center for Discovery and Innovation.

The CDI team's findings could ultimately improve cancer treatments for people of advanced age, like that of adult acute myeloid leukemia (AML), as they indicate in the paper in the journal Nature Communications.

The scientists demonstrated the function of two connected pathways involved in myelosuppressive injuries (like those caused by chemotherapy), in which bone marrow activity decreases, leading to less blood cell production.

The myelosuppression leads to chronic activation of the mitogen-activated protein kinase (MAPK) pathway - causing local and systemic inflammation, in turn driven by the Nuclear factor-kB (NF-kB) signaling pathway. This chronic inflammation resulted in disruption of the integrity of blood vessels and functional defects to the hematopoietic stem cell.

"We showed that SCGFa could be used therapeutically, to allow recovery of these crucial systems following myelosuppression," said Pradeep Ramalingam, the study's lead author.

"The elderly population tend to do worse following cancer treatments that result in myelosuppressive injury, since their bodies can't sustain as much chemotherapy as the young can," said Jason Butler, Ph.D., an associate member of the CDI, and the senior author, whose work is also part of the Georgetown Lombardi Comprehensive Cancer Center's National Cancer Institute-designated consortium. "But if we infuse patients with SCGFa, we may be able to protect their hematopoietic system and allow for rapid regeneration and rejuvenation of their bone marrow. This would allow us to potentially give patients more chemotherapy - and ultimately lead to better outcomes and lower relapse rates."

"These studies will become important to understand the precise molecular mechanisms by which SCGFa enhances hematopoietic regeneration and to develop treatment strategies directed towards protecting the hematopoietic system and the (bone marrow) endothelial niche following myelosuppressive therapies," the authors concluded.