PITTSBURGH—Soft and cuddly aren't words used to describe the plastic or metal things typically produced by today's 3D printers. But a new type of printer developed by Carnegie Mellon University and Disney Research Pittsburgh can turn wool and wool blend yarns into fabric objects that people might actually enjoy touching.

The device looks something like a cross between a 3D printer and a sewing machine and produces 3D objects made of a form of loose felt. Scott Hudson, a professor in CMU's Human-Computer Interaction Institute who developed the felting printer with Disney Research support, said the results are reminiscent of hand-knitted materials.

"I really see this material being used for things that are held close," Hudson said. "We're really extending the set of materials available for 3D printing and opening up new possibilities for what can be manufactured."

That could include apparel, accessories such as scarves and hats and even Teddy Bears. It also might be used to produce parts for so-called "soft robots" – robots designed to touch or be near people. Hudson will discuss the felting printer April 28 at the CHI Conference on Human Factors in Computing Systems in Toronto.

Like other 3D printers, Hudson's machine can make objects by working directly from computerized designs. It thus can be used for rapid prototyping of objects and to customize products.

In fact, the operation of the machine is similar to Fused Deposition Modeling, or FDM, the most common process used in low-end 3D printers. In a FDM printer, melted plastic is extruded in a thin line into a layer; subsequent layers are added to achieve the object's desired shape, with the layers adhering to each other as the plastic cools.

In the felting printer, however, the printer head feeds out yarn instead of lines of melted plastic. A barbed felting needle attached to the printer head then repeatedly pierces the yarn, dragging down individual fibers into the yarn in the layers below, entangling the fibers and bonding the layers together.

Hudson said the printer doesn't achieve the same dimensional accuracy as conventional 3D printers because the yarn is much thicker than the layers of plastic deposited in FDM printing. The felt also is not as strong as typical fabric, he noted, so if the soft objects are to be attached to a hard object, a layer of nylon mesh fabric must be incorporated during the printing process. This provides reinforcement to prevent the material from ripping away at the attachment point.

Hudson demonstrated techniques for bridging between the soft and hard materials, for manipulating the degree of stiffness in the soft objects and for incorporating electronic components.

These techniques require some assembly of objects because the printer now produces only fabric objects. But Hudson said it should be possible to design a printer that could produce both fabric and plastic elements in a single fabrication.

"A number of researchers are looking at mixed materials in 3D printing," he added. "That's one of the most interesting challenges now." 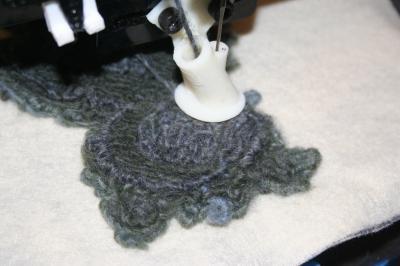 A 3D printer developed by Carnegie Mellon University and Disney Research Pittsburgh feeds yarn into desired shapes and uses a needle to turn the yarn into a loose felt.