SAN FRANCISCO -- A year-long experiment on tiny ocean organisms called coccolithophores suggests that the single-celled algae may still be able to grow their calcified shells even as oceans grow warmer and more acidic in Earth's near future.

The study stands in contrast to earlier studies suggesting that coccolithophores would fail to build strong shells in acidic waters. The world's oceans are expected to become more acidic as human activities pump increasing amounts of carbon dioxide into the Earth's atmosphere.

But after the researchers raised one strain of the Emiliania huxleyi coccolithorphore for over 700 generations, which took about 12 months, under high temperature and acidified conditions that are expected for the oceans 100 years from now, the organisms had no trouble producing their plated shells.

"At least in this experiment with one coccolithophore strain, when we combined higher levels of CO2 with higher temperatures, they actually did better in terms of calcification." said Jonathon Stillman, associate professor of biology at San Francisco State University, who along with Ed Carpenter, professor of biology, and Tomoko Komada, associate professor of chemistry, led a team of researchers at the University's Romberg Tiburon Center for Environmental Studies. The research was performed by postdoctoral scientist Ina Benner, masters students Rachel Diner and Dian Li and postdoctoral scientist Stephane Lefebvre.

Coccolithophores sequester oceanic carbon by incorporating it into their shells, which provide ballast to speed the sinking of carbon to the deep sea. These little organisms are central to the global carbon cycle, a role that could be disrupted if rising levels of atmospheric carbon dioxide and warming temperatures interfere with their ability to grow their calcified shells. 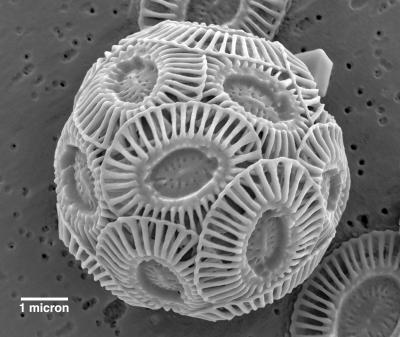 In previous experiments, the same SF State researchers found that the same strain of coccolithophores grown for hundreds of generations under cool and acidified water conditions grew less shell than those growing under current ocean conditions. In a short-term study by other researchers that examined the combined effects of higher temperatures and acidification, the same strain also had smaller shells under warmer and acidified conditions. However, results from this new long-term experiment suggest that this strain of coccolithophores may have the capacity to adapt to warmer and more acidic seas if given adequate time.

Stillman said the study underscores the importance of assessing multiple climactic factors and their impact on these organisms over a long time, to understand how they may cope with future oceanic environmental changes.

"We don't know why some strains might calcify more in the future, when others might calcify less," he said. Recent evidence indicates that the genetic diversity among coccolithophores in nature may hold part of the answer as to which strains and species might be "pre-adapted for future ocean conditions," Stillman added.

While these results indicate that coccolithophore calcification might increase under future ocean conditions, the researchers say that it's still unclear "whether, or how, such changes might affect carbon export to the deep sea."

The researchers received another surprise when they used recently developed genomic approaches to compare the expression of genes related to calcification in coccolithophores grown under current and future seawater conditions. "We really expected to see a lot of genes known to be involved in calcification to change significantly in the cells that thrived under high temperature and high acidity," Stillman said, "given their increased levels of calcification."

But the researchers found no significant changes in the expression of genes known to be involved in calcification from prior studies comparing strains with dramatically different calcification levels. It could be that these genes work as a sort of "on-off switch" for calcification, Stillman suggested. There may be other genes at work that control calcification in more subtle ways, affecting the degree of calcification.