(TORONTO, Canada – Feb. 12, 2014) – Cancer researchers led by stem cell scientist Dr. John Dick have discovered a pre-leukemic stem cell that may be the first step in initiating disease and also the culprit that evades therapy and triggers relapse in patients with acute myeloid leukemia (AML).

The research, published online today in Nature is a significant leap in understanding the steps that a normal cell has to go through as it turns into AML, says Dr. Dick, and sets the stage to advance personalized cancer medicine by potentially identifying individuals who might benefit from targeting the pre-leukemic stem cell. AML is an aggressive blood cancer that the new research shows starts in stem cells in the bone marrow. Dr. Dick, a Senior Scientist at Princess Margaret Cancer Centre, University Health Network (UHN), and Professor in the Department of Molecular Genetics, University of Toronto, pioneered the cancer stem cell field by first identifying leukemia stem cells (1994) and colon cancer stem cells (2007).

"Our discovery lays the groundwork to detect and target the pre-leukemic stem cell and thereby potentially stop the disease at a very early stage when it may be more amenable to treatment," says Dr. Dick, who holds a Canada Research Chair in Stem Cell Biology and is also Director of the Cancer Stem Cell Program at the Ontario Institute for Cancer Research (OICR).

VIDEO: Dr. Dick talks about the research at: http://ow.ly/tvFL7.

"Now we have a potential tool for earlier diagnosis that may allow early intervention before the development of full AML. We can also monitor remission and initiate therapy to target the pre-leukemic stem cell to prevent relapse," he says. 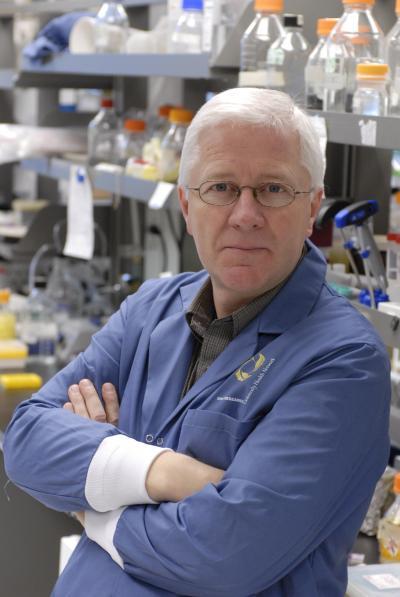 Cancer researchers led by stem cell scientist Dr. John Dick have discovered a pre-leukemic stem cell that may be the first step in initiating disease.

The findings show that in about 25% of AML patients, a mutation in the gene DNMT3a causes pre-leukemic stem cells to develop that function like normal blood stem cells but grow abnormally. These cells survive chemotherapy and can be found in the bone marrow at remission, forming a reservoir of cells that may eventually acquire additional mutations, leading to relapse.

The discovery of pre-leukemic stem cells came out of a large Leukemia Disease Team that Dr. Dick assembled and included oncologists who collected samples for the Princess Margaret Cancer Centre Biobank and genome scientists at the OICR who developed sophisticated targeted sequencing methodology. With this team, it was possible to carry out genomic analysis of more than 100 leukemia genes on many patient samples. The findings also capitalized on data from more than six years of experiments in Dr. Dick's lab involving growing human AML in special mice that do not reject human cells.

"By peering into the black box of how cancer develops during the months and years prior to when it is first diagnosed, we have demonstrated a unique finding. People tend to think relapse after remission means chemotherapy didn't kill all the cancer cells. Our study suggests that in some cases the chemotherapy does, in fact, eradicate AML; what it does not touch are the pre-leukemic stem cells that can trigger another round of AML development and ultimately disease relapse," says Dr. Dick, who anticipates the findings will spawn accelerated drug development to specifically target DNMT3a.

These findings should also provide impetus for researchers to look for pre-cancerous cells in AML patients with other mutations and even in non-blood cancers.

Dr. Dick is also renowned for isolating a human blood stem cell in its purest form (2011) – as a single stem cell capable of regenerating the entire blood system. He is a Senior Scientist at UHN's McEwen Centre for Regenerative Medicine and co-leader of a Cancer Stem Cell Consortium (CSCC)-funded research project HALT (Highly Active Anti-Leukemia Stem Cell Therapy), which is a partnership between CSCC and the California Institute for Regenerative Medicine.

For more than 20 years, Dr. Dick's research has focused on understanding the cellular processes that maintain tumour growth by investigating the complexities and interplay among genetic and non-genetic determinants of cancer. His research follows on the original 1961 discovery of the blood stem cell by Princess Margaret Cancer Centre (formerly Ontario Cancer Institute) scientists Dr. James Till and the late Dr. Ernest McCulloch, which formed the basis of all current stem cell research.