Can social media help stop the spread of HIV?

In addition to providing other potential benefits to public health, all of those tweets and Facebook posts could help curb the spread of HIV.

Although public health researchers have focused early applications of social media on reliably monitoring the spread of diseases such as the flu, Sean Young of the Center for Digital Behavior at the University of California, Los Angeles, writes in an October 29th article in the Cell Press journal Trends in Microbiology of a future in which social media might predict and even change biomedical outcomes.

"We know that mining social media will have huge potential benefits for many areas of medicine in the future, but we're still in the early stages of testing how powerful these technologies will be," Young said.

With the right tools in place, he says, social media offers a rich source of psychological and health-related data generated in an environment in which people are often willing to share freely.

His recent work on Behavioral Insights on Big Data (BIBD) for HIV offers the tantalizing possibility that insights gleaned from social media could be used to help governments, public health departments, hospitals, and caretakers monitor people's health behaviors "to know where, when, and how we might be able to prevent HIV transmission." 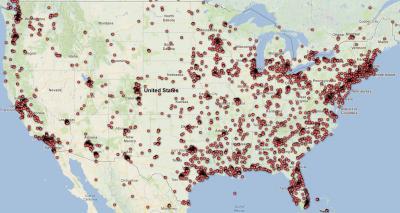 This is a map showing the origins of tweets related to HIV.

Young details a social-media-based intervention in which African American and Latino men who have sex with men shared a tremendous amount of personal information through social media, including when or whether they had 'come out,' as well as experiences of homelessness and stigmatization. What's more, they found that people who discussed HIV prevention topics on social media were more than twice as likely to later request an HIV test.

In the context of HIV prevention, tweets have also been shown to identify people who are currently or soon to engage in sexual- or drug-related risk behaviors. Those tweets can be mapped to particular locations and related to actual HIV trends.

What's needed now is the updated infrastructure and sophisticated toolkits to handle all of those data, Young said, noting that there are about 500 million communications sent every day on Twitter alone. He and a team of University of California computer scientists are working to meet that challenge now.

"Since people are already getting used to the fact that corporations are doing this, we should at least support public health researchers in using these same methods to try and improve our health and well being," he said. "We're already seeing increased support from patients and public health departments."