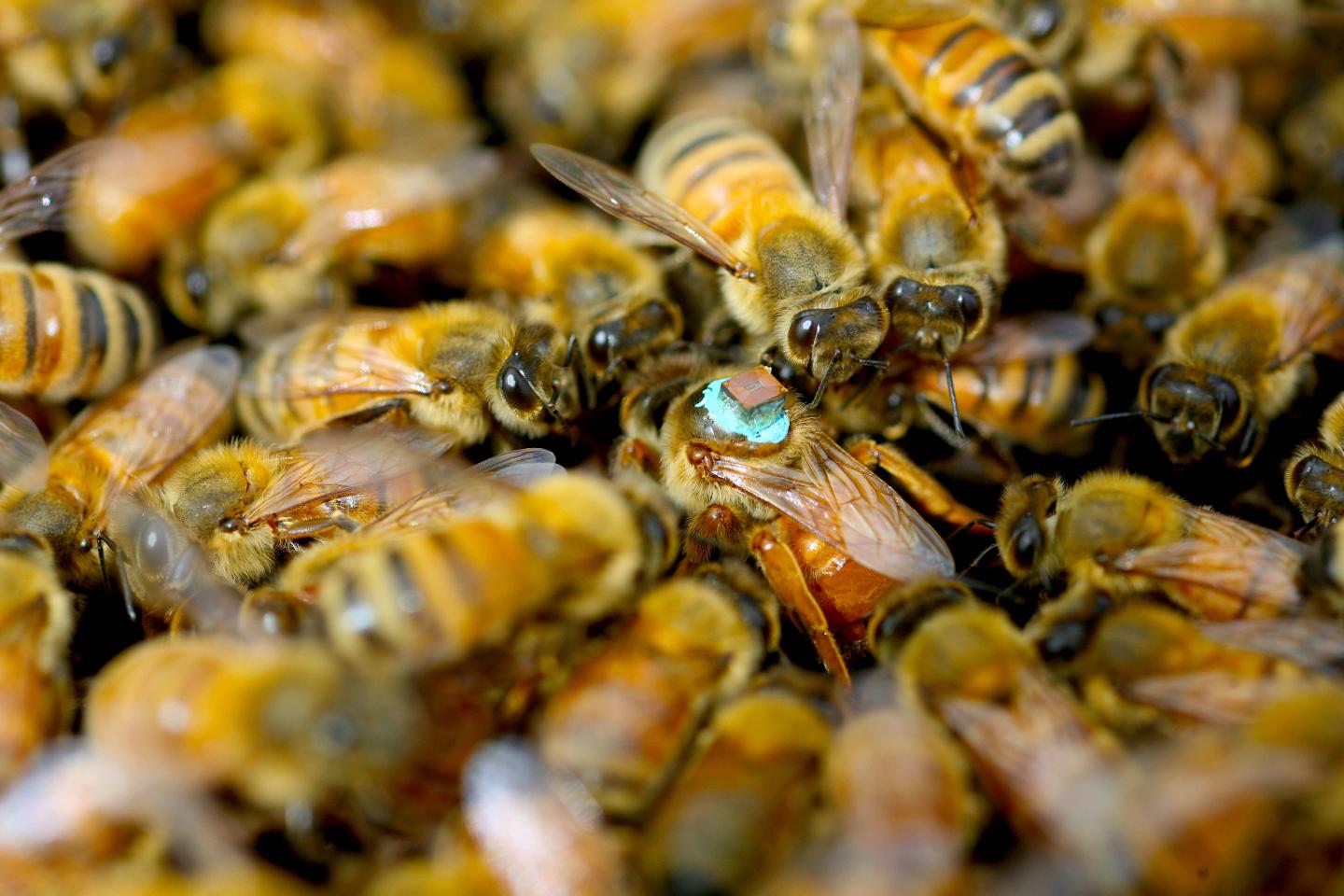 IMAGE: Queen honeybee in a hive.

They say love is blind, but if you're a queen honeybee it could mean true loss of sight.

New research finds male honeybees inject toxins during sex that cause temporary blindness. All sexual activity occurs during a brief early period in a honeybee's life, during which males die and queens can live for many years without ever mating again.

UC Riverside's Boris Baer, a professor of entomology, said males develop vision-impairing toxins to maximize the one fleeting opportunity they may ever get to father offspring.

"The male bees want to ensure their genes are among those that get passed on by discouraging the queen from mating with additional males," said Baer, senior author of the study that discovered these blinding findings published today in the journal eLife. "She can't fly if she can't see properly."

The toxins identified by the team are proteins contained in male bees' seminal fluid, which is a substance that helps maintain sperm. Earlier work by Baer's team also discovered honeybee seminal fluid toxins that kill the sperm of rivals. All honeybees make these proteins, though some may make more of it than others.

Baer first became interested in bees' seminal fluid years ago as a doctoral student. During early projects, he noticed that if bumblebee queens were injected only with the fluid and not the sperm during insemination, the queens stopped mating and became increasingly aggressive toward males. He wanted to understand why.

Roughly 10 years ago, Baer and his international team began analyzing which proteins could be found in honeybees' fluids.

"We found at least 300 of these 'James Bonds,' little secret agents with specific missions," he said.

To test whether the protein had this effect, Baer's team presented inseminated queens with a flickering light, and measured her response to it via tiny electrodes in her brain. The vision and corresponding flight-impairing effects kick in within hours, but Baer notes that it is likely reversible in the long term because queens do tend to fly successfully later in life when they establish new colonies.

Studying the seminal fluid proteins required an interdisciplinary team of entomologists, biologists, biochemists, and more to identify them and examine their effects on the queens.

This team included Baer's wife and co-author, Barbara Baer-Imhoof, a UC Riverside pollination specialist. As part of this project, Baer-Imhoof conducted experiments in which she installed tiny tags on queen bees' backs read by scanners at the hive entrances.

"The tags were similar to those at the self-checkout counter in grocery stores," Baer-Imhoof said. The experiment showed queens had difficulties finding their way back to their colonies if they had been inseminated.

A molecular understanding of honeybee mating habits could eventually be used to improve breeding programs and help insects that pollinate many of the foods we eat.

"More than a third of what we eat depends on bee pollination, and we've taken bees' services for granted for a very long time," Baer said. "However, bees have experienced massive die-offs in the last two decades. Anything we can do to help improve their numbers will benefit humans, too."