With the introduction of curved smartphones, flexible electronic goods are gradually moving to the center stages of various markets. Flexible display technology is the culmination of the latest, cutting-edge electric cell device technology. Developing such products, however, requires not only a curved display, but also operational precision of other parts, including the memory, in a flexible state.

The most common memory cell today uses a silicone (Si)-based hard, inorganic matter, however, in order to be flexible, the materials were fabricated with a carbon-based organic compound. The recently developed memory cell uses a technology, which arranges such organic material in a single configuration at room temperature and places the material on a desired spot on the substrate. This is the core technology in enlarging the storage capacity of memory, an unprecedented discovery until now. In particular, demonstrating this on a bendable substrate required highly sophisticated technology, which signified difficulties in fabrication. The research team developed a technology with the above characteristics to make the electric current flow in one direction so that the data could be rewritable even in a curved state.

In the past, each memory device was configurated with a grating structure, but there were complications in commercializing such device due to inaccuracy in storage and deleting data caused by a cross-talk between cells in the process of expanding its capacity. Therefore, research had continuously been conducted not only on bending the memory, but on resolving such intervention issues and enhancing accuracy.

In this research, organic memory cells (resistors) based on carbon nano compounds and organic diodes to control the direction of electric currents were stacked upon each other. Once the direction of the electric current is controlled and can be made to flow in one direction, data can be made rewritable, thereby limiting any interference from nearby cells. These cells are constructed in the form of 1D-1R (1 Diode + 1 Resistor)*, which gives them flexibility with accuracy in data processing.

* 1D-1R (1 Diode + 1 Resistor) array: An architecture where a resistor, which is a memory cell, is piled upon a diode, and controls the direction of electric currents.

Previous organic memory cells were fabricated with the spin-coating method, a major solution process. However, in a continuous process such as above, the organic diode layer (1D) and the organic memory layer (1R) were damaged. Dr. Kim utilized the crosslinker* method, which can create patterns in a low temperature process, to resolve this problem. The crosslinker method enables the organic memory layer and organic diode layer to avoid damaging each other in the process of creating continuous layers. By using this method, his team managed to develop a non-volatile (where the storage capacity remains undisturbed even with the suspension of power) memory cell with an organic architecture, which was applicable on a twistable plastic substrate and with a 64-bit storage capacity. 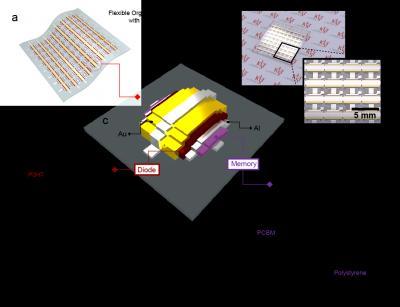 * Crosslinker Method: A method of subjecting organic matter to ultraviolet rays to solidify the desired part with light. It can be demonstrated in a low temperature process, but it is also a way to chemically stabilize the organic matter while enabling it to maintain its original characteristics after fabrication.

In order to confirm whether the problem of cross-talk between cells was resolved, the research team succeeded in storing the letters 'KIST' while the device was bended. Such results prove that organic memory cells can also be utilized in parts of other flexible electronic goods, in addition to previous electronic cells.

According to Dr. Kim, "This research unveils the direction for research to resolve the greatest obstacle in organic memory cell research with past structures, and is expected to contribute broadly to future research on flexible electric cells and parts." 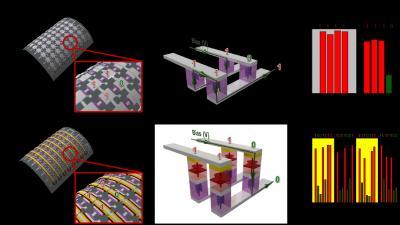 Fig. 2 (a) is the picture of a previous organic resistive flexible memory cell. Due to the interference of nearby cells (b), the current value '0' is mis-read as '1' as illustrated in the left bar graph in (c).The recently developed all-organic 1D-1R diode (d) does not suffer from cross-talk between cells (e), and as shown in the bar distribution, it accurately reads the current values '0' and '1'. Fig. 2 (f) shows the demonstration of the acronym for the Korea Institute of Science and Technology, 'KIST' based on the distribution of the current values '0' and '1' and by using the ASCII code.