Working together, Johns Hopkins biomedical engineers and neurosurgeons report that they have created tiny, biodegradable "nanoparticles" able to carry DNA to brain cancer cells in mice.

The team says the results of their proof of principle experiment suggest that such particles loaded with "death genes" might one day be given to brain cancer patients during neurosurgery to selectively kill off any remaining tumor cells without damaging normal brain tissue.

A summary of the research results appeared online on April 26 in the journal ACS Nano.

"In our experiments, our nanoparticles successfully delivered a test gene to brain cancer cells in mice, where it was then turned on," says Jordan Green, Ph.D., an assistant professor of biomedical engineering and neurosurgery at the Johns Hopkins University School of Medicine. "We now have evidence that these tiny Trojan horses will also be able to carry genes that selectively induce death in cancer cells, while leaving healthy cells healthy."

Green and his colleagues focused on glioblastomas, the most lethal and aggressive form of brain cancer. With standard treatments of surgery, chemotherapy and radiation, the median survival time is only 14.6 months, and improvement will only come with the ability to kill tumor cells resistant to standard treatments, according to Alfredo Quiñones-Hinojosa, M.D., a professor of neurosurgery at the Johns Hopkins University School of Medicine and a member of the research team.

Because nature protects the brain by making it difficult to reach its cells through the blood, efforts turned to the use of particles that could carry tumor-destroying DNA instructions directly to cancer cells during surgery.

The initial experiments made use of cancer cells that Quiñones-Hinojosa and his team removed from willing patients and grew in the laboratory until they formed little spheres of cells, termed oncospheres, likely to be the most resistant to chemotherapy and radiation, and capable of creating new tumors.

Quiñones-Hinojosa then worked with Green to find a vehicle for genes that would cause death in the oncospheres. Green's laboratory specializes in producing tiny, round particles made up of biodegradable plastic whose properties can be optimized for completing various medical missions. By varying the atoms within the plastic, the team can make particles that have different sizes, stabilities and affinities for water or oil. For this study, Green's team created dozens of different types of particles and tested their ability to carry and deliver a test sequence of DNA — specifically a gene for a red or green glowing protein — to the oncospheres.

By assessing the survival of the cells that engulf the particles and measuring the levels of red or green light that they emitted, the researchers determined which formulation of particles performed best, then tested that formulation in mice with human brain cancer derived from their patients. 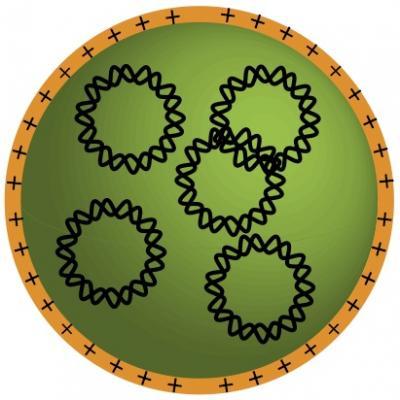 They injected the particles directly into mice with an experimental human brain cancer, and into the brains of healthy mice for use as comparison. Surprisingly, healthy cells rarely produced the glowing proteins, even though the DNA-carrying particles were entering tumor cells and non-tumor cells in similar numbers. "This is exactly what one would want to see, cancer specificity, but we are still researching the mechanism that allows this to occur," says Green. "We hope our continued experiments will shed light on this so that we can apply what we learn to other scenarios."

"It is exciting to have found a way to selectively target gene delivery to cancer cells," says Quiñones-Hinojosa. "It's a method that is much more feasible and safer for patients than traditional gene therapy, which uses modified viruses to carry out the treatment."

He adds that the particles can be freeze-dried and stored for at least two years without losing their effectiveness. "Nanoparticles that remain stable for such a long time allow us to make up formulations well in advance and in large batches," says Stephany Tzeng, Ph.D., a member of Green's team. "This makes them easy to use consistently in experiments and surgeries; we add water to the particles, and they're good to go."

In a related study, published online on March 27 in the same journal, Green's group also showed that a different particle formulation could effectively carry and deliver so-called siRNAs to brain cancer cells. siRNAs are very small molecules that carry genetic information to cells, but unlike DNA that can turn genes on, siRNA interferes with the production of particular proteins and can turn cancer genes off.

Green explains that siRNAs must be encapsulated in particles that are different from those used to carry DNA because siRNAs are about 250 times smaller than the DNA molecules usually used for gene therapy. "siRNAs are also much stiffer than DNA, and they don't have to enter the cell nucleus because they do their work outside it, in the cytoplasm," he says.

An initial library of 15 biodegradable particle formulations was tested for their ability to carry siRNAs into human glioblastoma cells that were genetically engineered to make green fluorescent protein (GFP). The siRNAs added to the particles contained the GFP code, so successfully targeted cells would stop glowing green.

As in their mouse study, the siRNA was more effective — in this case at causing cell death — in the brain cancer cells (up to 97 percent effective) than in the non-cancerous cells (0 to 27 percent, depending on nanoparticle type).

Green emphasizes that for nanoparticle-based genetic therapies that are safe for patients, the specific siRNA or DNA being delivered in a clinical treatment would be carefully chosen so that, even if there was off-target delivery to healthy cells, it would only be detrimental to cancer cells. Green is encouraged by the results so far. "Combining what we've learned in these two studies, we might even be able to design particles that can deliver DNA and siRNA at the same time," he says. "That would allow us to fine tune the genetic self-destruct code that our particles deliver so that cancer cells die and healthy cells do not."

"Dr. Green and his colleagues have taken important steps in developing polymeric nanoparticles for DNA and siRNA delivery, with promising specificity for tumor cells and enhanced stability," said Jessica Tucker, Ph.D., program director for drug and gene delivery systems and devices at the National Institute of Biomedical Imaging and Bioengineering, which provided partial funding for these studies. "Though many challenges still remain, such work could potentially transform treatment outcomes for patients with glioblastoma and related brain tumors, for which current therapies provide limited benefits."