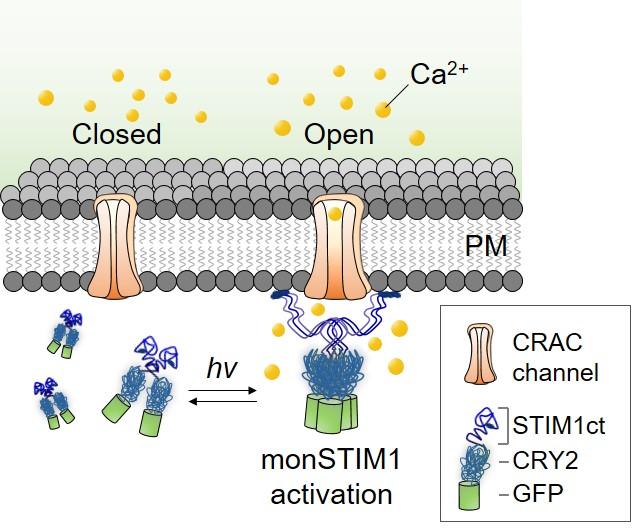 IMAGE: Upon blue light illumination, this optogenetic tool opens calcium channels (CRAC channels), so that calcium (Ca2+) can enter inside the cells. It is formed by two parts: CRY2, and STIM1....

Researchers at the Center for Cognition and Sociality, within the Institute for Basic Science (IBS) in South Korea, have engineered an improved biological tool that controls calcium (Ca2+) levels in the brain via blue light. Published in Nature Communications, this optogenetic construct, called monster-OptoSTIM1 or monSTIM1 for short, causes a change in mice's fear learning behavior without the need of optic fiber implants in the brain.

The brain utilizes Ca2+ signaling to regulate a variety of functions, including memory, emotion, and movement. Several evidences show correlation between abnormally regulated Ca2+ levels in certain brain cells and neurodegenerative diseases, but the details still remain obscure. For understanding the precise role of Ca2+ signaling, the IBS team is studying Ca2+-specific modulators that can be triggered in different parts of the brain at a designated time.

Optogenetics uses light to control Ca2+ signaling in the mouse brain. Since the brain is surrounded by hair, skin and skull, which prevent light from reaching deep tissues, optic fiber insertion in the brain used to be the norm in optogenetics. However, these implants can cause inflammation, morphological changes of neurons and disconnection of neural circuits. In this study, the research team improved their optogenetic tool so that it works with an external source of blue light, shone from the ceiling of the mouse cage, and without the need of brain implants.

MonSTIM1 is made of a part (CRY2) that responds to blue light and another part (STIM1) that activates calcium channels. Compared to the previously developed optogenetic techniques, the researchers were able to enhance CRY2's light-sensitivity approximately 55-fold and also avoid the increase of basal Ca2+ levels. The monSTIM1 construct was injected into the mouse brain through a virus, and was shown to activate Ca2+ signals in the cortex as well as in the deeper hippocampus and thalamus regions.

The team observed behavioral changes in mice with monSTIM1 expressed in excitatory neurons in the anterior cingulate cortex, a brain region that has a central function in empathic emotions. Mice with activated monSTIM1 froze with fear by looking at other mice, which experienced a mild electric foot shock. Twenty-four hours later the same mice remembered about it and showed again an enhanced fear response, indicating that Ca2+ signaling contributed to both short- and long-term social fear responses.

"MonSTIM1 can be applied to a wide range of brain calcium research and brain cognitive science research, because it allows easy manipulation of intracellular calcium signals without damaging the brain," says Won Do Heo (KAIST professor), leading author of this research.