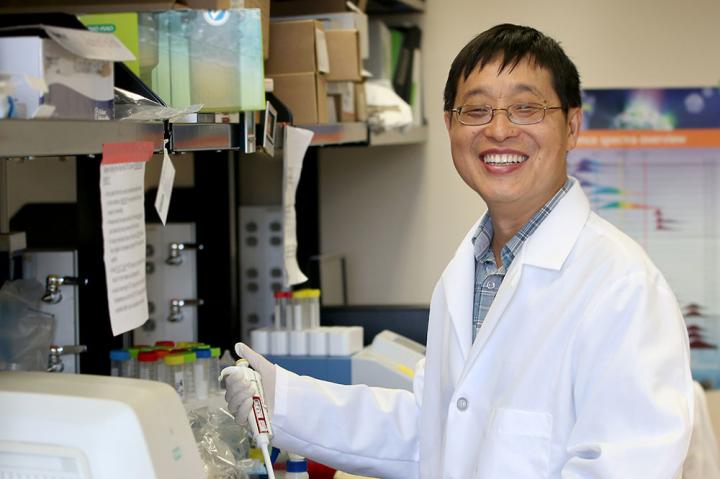 Xue-Zhong Yu, M.D., who also is associate director of Basic Science at Hollings, and collaborators at the Indiana University School of Medicine discovered that donor T-cells must have the key enzyme lysosomal acid lipase in order to induce GVHD.

The Yu laboratory focuses on understanding the biological balance between GVHD and graft-versus-leukemia effect. Hematopoietic stem cell transplantation is used as a treatment option for some leukemia patients. T-cells in stem cell grafts from a donor are given to a leukemia patient in order to kill the cancer and reboot the patient's immune system. GVHD is a big clinical challenge because the donor T-cells, which come from the bone marrow, can attack the patient's organs. Anywhere from 30% to 70% of patients develop acute GVHD after allogeneic bone marrow transplant and 15% die.

"When we deal with hematopoietic cell transplant, it is an important balance - blocking GVHD while still allowing T-cells to do their job and control the cancer," Yu said.

Each cell in our body has its own metabolic process. Cells convert the food that is eaten into energy in order to perform their intended functions. However, cellular metabolism is often altered in various diseases. Yu researches T-cell metabolism in order to understand the balance between graft-versus-host and graft-versus-leukemia responses.

Most cells in our body require oxygen to create energy efficiently. However, this research focused on lipid, or fat, metabolism. T-cells have special metabolic processes: Sometimes they multiply so rapidly that they need an extra source of energy from free fatty acids.

Lysosomal acid lipase is an enzyme that breaks the large lipids and cholesterol into individual free fatty acid building blocks. If that enzyme is missing, there are not enough free fatty acids for energy production. This changes the T-cell metabolism, which in turn changes T-cell function.

Clinically, broad spectrum immunosuppression drugs (steroids and rapamycin) are still used as the first line of care in patients with severe GVHD. However, Yu and collaborators hypothesized that changing T-cell metabolism could reduce GVHD after hematopoietic stem cell transplantation.

"We know that the gut is the primary organ affected by GVHD. Since the gut has less oxygen, the T-cells rely on free fatty acids and must use lysosomal acid lipase. We thought if we could remove or block the activity of that, we could reduce GVHD in the gut."

Therefore, blocking lysosomal acid lipase activity with orlistat preferentially stopped the donor T-cells from damaging the gut but allowed the T-cells to function during circulation and kill the leukemia cells.

The researchers' future plan is to look deeper at the biological mechanisms. For example, it is not clear how the loss or inhibition of lysosomal acid lipase affects the other metabolites in T-cells. To move this finding closer to the clinic, Yu explained that human cells can be used in a special mouse model that recreates the human immune environment.

"Looking at the immune cells in the gut was technically challenging. However, the results were exciting because our hypothesis was validated. These results encourage us to continue studying this in order to provide better treatment options to patients."