A group headed by Remco van den Bosch from the Max Planck Institute for Astronomy has discovered a black hole that shakes the foundations of current models of galaxy evolution. This monster has 17 billion solar masses and is thus significantly heavier than the models predict. And even more significantly: the object could be the most massive black hole known to date.

Astronomers believe there is a super-massive black hole at the heart of every galaxy. Its mass ranges from several hundred thousand solar masses to a few billion. The black hole that has been best investigated has around four million solar masses and sits at the centre of our home galaxy, the Milky Way.

Studies of the masses of distant galaxies and their black holes have turned up an interesting relationship: accordingly, a black hole typically reaches only a tiny fraction - around 0.1 percent - of the total mass of all stars belonging to the parent galaxy. Although this relationship is not completely understood, it plays an important role in all current galaxy evolution models.

Now, during a systematic search which started in 2010, the team headed by Remco van den Bosch has tracked down a black hole that could upset this generally accepted relationship. To accomplish this, the astronomers used the Hobby-Eberly telescope and archived images from the Hubble space telescope.

The Hobby-Eberly telescope at the McDonald observatory in Texas/USA has a main mirror measuring 11 by 9.8 metres in total and is comprised of 91 hexagonal sub-mirrors. Thanks to the size of the optics, the observation of each individual galaxy can be carried out relatively quickly; the team was able to obtain almost 700 galactic spectra.

The spectra enabled the astronomers to draw conclusions about the motions of the stars, which depend directly on the gravitation of the black hole. With the aid of specific changes, such as the shift of spectral lines (Doppler effect), they were able to derive the velocity, for example. The rule here: the more massive the black hole, the more rapid the motion of the stars in the centre of the galaxy.

The team thus identified six candidate galaxies which were comparatively small and had to have large black holes. The archives of the Hubble space telescope already contained detailed images of one of them, NGC 1277.

Invisible gravitational trap: the centre of the NGC 1277 disk galaxy harbours a black hole with 17 billion solar masses -- one of the heaviest ever found.

In order to determine the mass of the black hole, van den Bosch and his colleagues produced a dynamic model of the galaxy that includes all possible stellar orbits. Systematic comparisons of model and observation data then showed which orbits in combination with which mass value for the black hole provided the best explanation for the observations.

In the case of the NGC 1277 disk galaxy, the astronomers arrived at around 17 billion solar masses. This meant that the black hole could be the largest known object of this class. Researchers estimate the mass of the current record holder to be between 6 and 37 billion solar masses; if the true value is at the lower end, NGC 1277 breaks this record.

The greatest surprise for the astronomers was that the mass of the huge gravitational trap amounted to around 14 percent of NGC 1277's total mass - which is significantly more that the 0.1 percent stated above and means a factor of more than ten. In other words: the astronomers had expected a black hole of this size in an unstructured ("elliptic") galaxy at least ten times as big - but not in a small disk galaxy like NGC 1277.

Is this a rare freak of nature, an exception? Preliminary analyses of further data point in a different direction: Remco van den Bosch and his colleagues have to date discovered five further galaxies which are comparatively small, but might nevertheless have unusually massive central black holes. This will only be known for sure when detailed images of these galactic systems are available, however.

If these further cases are confirmed and there are indeed more black holes like the one found in NGC 1277, then astronomers will need to fundamentally rethink their galaxy evolution models. They will particularly have to direct their attention to the early universe: the NGC 1277 galaxy appears to have formed more than eight billion years ago and has not changed very much since then. No matter how this gigantic black hole formed - it must have happened a long time ago. 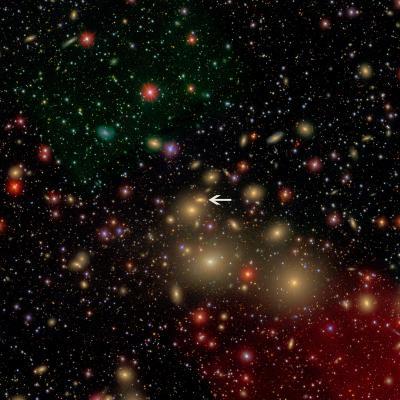 Collection of galaxies: the Perseus cluster is around 250 million light years away from Earth. The NGC 1277 member galaxy (arrow) appears comparatively compact.