The latest version of a bionic pancreas device has been successfully tested in two five-day clinical trials – one in adults, the other in adolescents – that imposed minimal restrictions on patient activities. A team of investigators from Boston University (BU) and Massachusetts General Hospital (MGH) report study results in a New England Journal of Medicine paper being issued online to coincide with a presentation (abstract # 237-OR) at the American Diabetes Association Scientific Sessions. The device controls blood sugar in patients with type 1 diabetes using doses of both insulin and the blood-sugar-raising hormone glucagon.

"In both of these studies this device far exceeded our expectations in terms of its ability to regulate glucose, prevent hypoglycemia and automatically adapt to the very different needs of adults – some of whom were very insulin-sensitive – and adolescents, who typically need higher insulin doses," says Edward Damiano, PhD, of the BU Department of Biomedical Engineering, principal investigator of the project and senior author of the NEJM report. "There's no current standard-of-care therapy that could match the results we saw."

Firas El-Khatib, PhD, of the BU Department of Biomedical Engineering, adds, "One of the key virtues of this device is its ability to start controlling the blood sugar instantly, based only on the patient's weight, and continually adapt its decision making regarding insulin and glucagon dosing to handle a wide range of dosing requirements." El-Khatib co-designed the bionic pancreas device with Damiano and is co-lead author of the NEJM report with Steven Russell, MD, PhD, of the MGH Diabetes Unit,.

Russell – who led the clinical trials reported in the current paper – Damiano, and El-Khatib previously published a 2010 Science Translational Medicine report that described successful use of the first-generation system in controlling the blood sugar of adults for 27 hours. But that study took place in a controlled hospital inpatient environment where participants essentially stayed in bed for the whole period and ate prescribed meals. "The key element with the current version of this device is that it's wearable, allowing participants to stay in something close to their usual environments, exercise and eat whatever they want," says Russell.

Additional inpatient trials conducted after the 2010 paper extended the study period to two days and included adolescents as well as adults. But developing a device that could be tested safely in an outpatient environment presented several challenges, first among which was a control system that could adapt not only to the minute-by-minute changing needs of an individual, but also to the very different needs of adults and adolescents. The rapid growth and hormonal changes of adolescence produces insulin requirements that are two to three times greater than those of adults of the same body weight, Damiano explains. And even though the dosage needs of adults are more predictable, contracting typical a illness like a cold or upset stomach can dramatically change the need for insulin over a period of days to weeks. 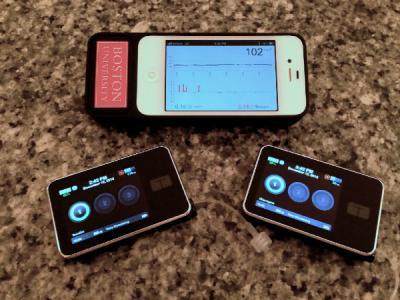 The bionic pancreas developed by a Boston University/Massachusetts General Hospital research team consists of a smartphone (above) hardwired to a continuous glucose monitor and two pumps (below) that deliver doses of insulin or glucagon every five minutes.

Along with the software improvements that allow the device to adapt to widely varied individual dosage needs, the new version also relies on improved hardware, including a smartphone (iPhone 4S) capable of practical wireless communication with two pumps delivering doses of insulin and glucagon. Every five minutes the smartphone receives a blood sugar reading from an attached continuous glucose monitor, which it uses to calculate and administer a dose of either insulin or glucagon. The smartphone includes an application on which the patient enters information immediately before eating. But instead of the complex calculation patients typically do to estimate their carbohydrate intake, this app only asks whether the meal consumed will be breakfast, lunch, or dinner and whether the carbohydrate content will be typical, larger or smaller than usual.

Both of the studies reported in the NEJM paper compared data reflecting five days on the bionic pancreas system with five days of participants' usual care using their own insulin pumps. The adult trial enrolled 20 participants who lived at home and managed their own care during the usual-care period. While on the bionic pancreas, participants needed to stay within a three-square-mile area of downtown Boston, which enabled constant wireless monitoring of the blood sugar levels by study staff. They were accompanied by a study nurse 24 hours a day and slept in a hotel; but were otherwise free to do as they chose, including exercising at a gym and eating in restaurants.

The adolescent trial enrolled 32 participants, ages 12 to 20, attending a camp for youngsters with type 1 diabetes, who followed the same activity and meal schedule as other campers during both phases of the trial. They were closely monitored by study and camp staff and via wireless monitoring during their time on the bionic pancreas. Participants in both phases of both trials were alerted if blood sugar levels dropped into a range requiring carbohydrate administration, including during nighttime monitoring.

Damiano, whose 15-year-old son was diagnosed with type 1 diabetes at the age of 11 months, explains what having a device like this could mean to patients. "The most practical difference would be not having to think about diabetes 24/7, not having to constantly make decisions about things that those of us without type 1 never have to think about. Another real problem that would be relieved is the fear – fear of going to bed at night and not knowing if your blood sugar level will drop dangerously low while you sleep. Even our study participants, who controlled their blood sugars significantly better than national averages on their usual care, ran high levels overnight but still had significant episodes of hypoglycemia.

"And another extremely frustrating aspect of diabetes that would be completely eliminated by this device is the enormous sense of failure when you stare at that glucose meter and, despite everything you do to control it, your blood sugar is not in or near the normal range," he continues. "But of course you didn't fail; the tools that are available to you failed. The bionic pancreas we are working toward would relieve that sense of failure and provide a bridge to the often-promised but still elusive cure for type 1 diabetes." 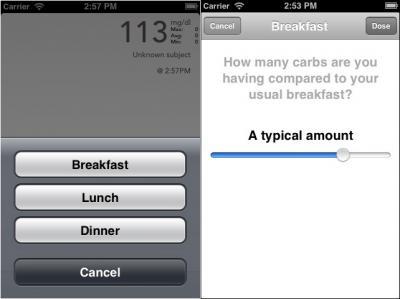 Bionic pancreas study participants used a smartphone app to indicate the meal they are about to consume and whether or not it contains a typical amount of carbohydrates.

Two follow-up trials are in the works, one of which will be a true home study only requiring that participants stay within an hour's drive of the study site. That trial, which will compare 11 days on the bionic pancreas with 11 days of usual care, will be coordinated by Russell's MGH team and conducted at four centers – the MGH, the University of Massachusetts Medical Center in Worcester, the University of North Carolina at Chapel Hill, and Stanford University – and will begin on June 16 at MGH. The second study, conducted at Camp Clara Barton and Camp Joslin in central Massachusetts, will enroll children ages 6 to 11 and is currently enrolling participants already registered at the camps. Information on both of those trials and on the overall project is available at http://www.bionicpancreas.org/. 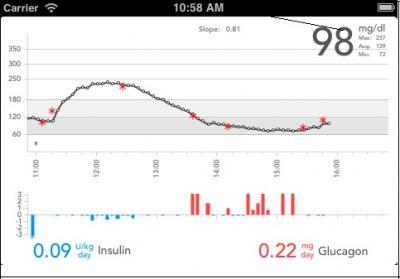 The smartphone component of the bionic pancreas system displays in an upper panel the blood sugar levels (black circles) as reported by the glucose monitor every five minutes, supplemented by fingerstick readings (red asterisks) entered by the patient over the past six hours. An adjacent lower panel shows doses of insulin (blue) or glucagon (red) automatically administered in response to blood sugar variations.