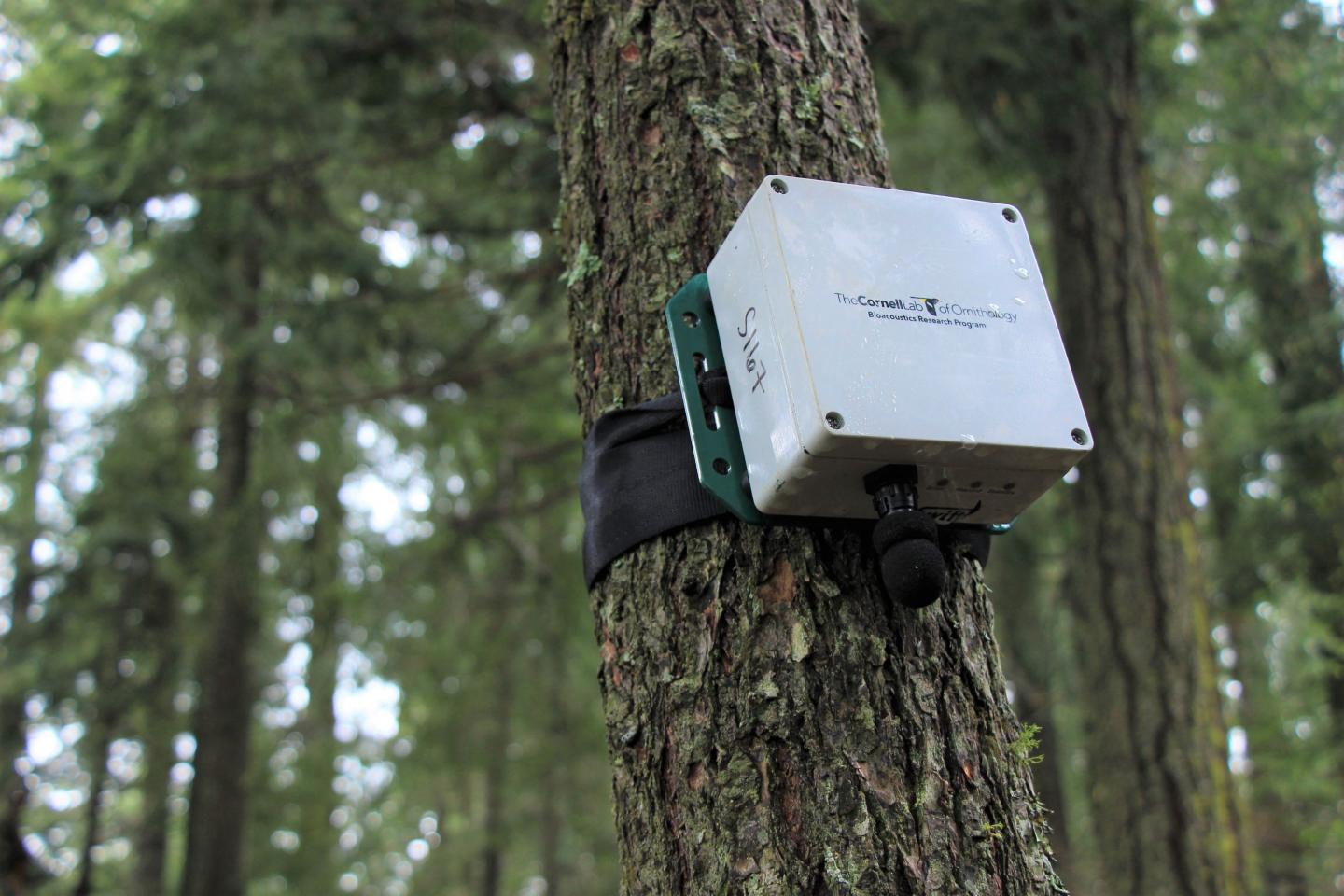 IMAGE: Passive acoustic monitoring using devices like this one let researchers track the presence of owls across a vast area.

In the Pacific Northwest, the range expansion of Barred Owls has contributed to a conservation crisis for Northern Spotted Owls, which are being displaced from their old-growth forest habitat. How will this interaction between species play out in the Sierra Nevada, where Barred Owls are just starting to move into the range of the California Spotted Owl? New research published in The Condor: Ornithological Applications suggests that wildlife managers may still be able to head off similar problems in critical areas of the Golden State -- if they act now.

The University of Wisconsin's Connor Wood and his colleagues used passive acoustic monitoring to survey Barred Owl populations over two years, deploying audio recorders over an area spanning more than 6,000 square kilometers across two national forests in northern California. Locating owl calls in the audio data allowed them to determine which sites were and were not occupied by owls. They found a 2.6-fold increase in the amount of territory occupied by Barred Owls between 2017 and 2018, and the old forest habitat preferred by Spotted Owls was the most likely to be colonized.

Populations of invasive species typically remain at low densities for several generations before growing rapidly. Because intervening to control a potentially damaging invasive species requires many resources, land managers often wait for strong evidence that a species will pose a threat before taking action. But, by the time the "growth phase" has started, it's often too late. Wood and his colleagues believe their results show that the growth phase of the Barred Owl population in the region is just beginning, meaning wildlife managers still have time to act. Only a narrow band of fairly unsuitable habitat connects the existing Pacific Northwest population of Barred Owls to the Sierra Nevada stronghold of California Spotted Owls, and the researchers recommend experimentally removing Barred Owls from the Sierra Nevada side of this pinch point to see if this can prevent them from becoming established further south.

"We suggested that managers act according to the Precautionary Principle: when there is a serious threat to human health or the environment, proactive responses are justified even if there is some uncertainty," says Wood. "We feel that experimental Barred Owl removals in the Sierra Nevada are an important step in determining the best long-term management strategy. This is not something that anyone takes lightly, but we feel that it is warranted because of the very real possibility that continued Barred Owl population growth could seriously endanger the California Spotted Owl. By catching this invasion in the early stages, we have a unique but potentially fleeting opportunity to inform policies that could prevent the California Spotted Owl from being driven extinct in the core of its range."