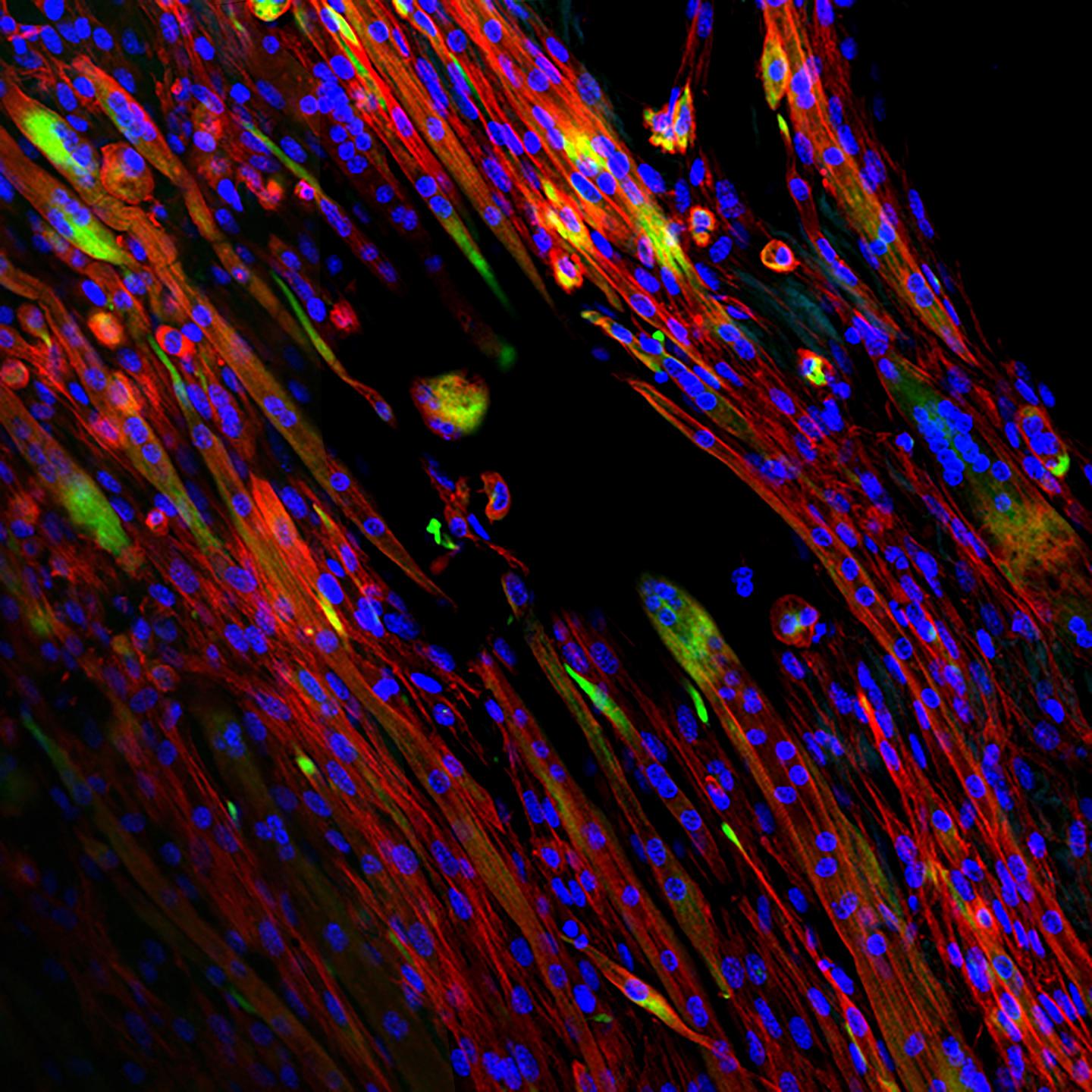 Their paper in Science Advances shows how natural extracellular matrix can be made to mimic native skeletal muscle and direct the alignment, growth and differentiation of myotubes, one of the building blocks of skeletal muscle. The bioactive scaffolds are made in the lab via electrospinning, a high-throughput process that can produce single micron-scale fibers.

The research could ease the burden of performing an estimated 4.5 million reconstructive surgeries per year to repair injuries suffered by civilians and military personnel.

Current methods of electrospinning decellularized muscle require a copolymer to aid in scaffold fabrication. The Rice process does not.

"The major innovation is the ability to prepare scaffolds that are 100% extracellular matrix," said Rice bioengineer and principal investigator Antonios Mikos. "That's very important because the matrix includes all the signaling motifs that are important for the formation of the particular tissue."

The scaffolds leverage bioactive cues from decellularized muscle with the tunable material properties afforded through electrospinning to create a material rich with biochemical signals and highly specific topography. The material is designed to degrade as it is replaced by new muscle within the body.

Experiments revealed that cells proliferate best when the scaffolds are not saturated with a crosslinking agent, allowing them access to the biochemical cues within the scaffold matrix.

Electrospinning allowed the researchers to modulate crosslink density. They found that intermediate crosslinking led to better retention of fiber alignment during cell culture.

Most decellularized matrix for muscle regeneration comes from such thin membranes as skin or small intestine tissue. "But for muscle, because it's thick and more complex, you have to cut it smaller than clinically relevant sizes and the original material properties are lost," said Rice graduate student and lead author Mollie Smoak. "It doesn't resemble the original material by the time you're done.

"In our case, electrospinning was the key to make this material very tunable and have it resemble what it once was," she said.

"It can generate fibers that are highly aligned, very similar to the architecture that one finds in skeletal muscle, and with all the biochemical cues needed to facilitate the creation of viable muscle tissue," Mikos said.

Mikos said using natural materials rather than synthetic is important for another reason. "The presence of a synthetic material, and especially the degradation products, may have an adverse effect on the quality of tissue that is eventually formed," he said.

"For eventual clinical application, we may use a skeletal muscle or matrix from an appropriate source because we're able to very efficiently remove the DNA that may elicit an immune response. We believe that may make it suitable to translate the technology for humans."

Smoak said the electrospinning process can produce muscle scaffolds in any size, limited only by the machinery.

"We're fortunate to collaborate with a number of surgeons, and they see promise in this material being used for craniofacial muscle applications in addition to sports- or trauma-induced injuries to large muscles," she said. "These would include the animation muscles in your face that are very fine and have very precise architectures and allow for things like facial expressions and chewing."