A study conducted at the University of Granada and the University of York in Toronto, Canada, has revealed that bilingual children develop a better working memory –which holds, processes and updates information over short periods of time– than monolingual children. The working memory plays a major role in the execution of a wide range of activities, such as mental calculation (since we have to remember numbers and operate with them) or reading comprehension (given that it requires associating the successive concepts in a text).

The objective of this study –which was published in the last issue of the Journal of Experimental Child Psychology– was examining how multilingualism influences the development of the "working memory" and investigating the association between the working memory and the cognitive superiority of bilingual people found in previous studies.

The working memory includes the structures and processes associated with the storage and processing of information over short periods of time. It is one of the components of the so-called "executive functions": a set of mechanisms involved in the planning and self-regulation of human behavior. Although the working memory is developed in the first years of life, it can be trained and improved with experience.

According to the principal investigator of this study, Julia Morales Castillo, of the Department of Experimental Psychology of the University of Granada, this study contributes to better understand cognitive development in bilingual and monolingual children. "Other studies have demonstrated that bilingual children are better at planning and cognitive control (i.e. tasks involving ignoring irrelevant information or requiring a dominant response). But, to date, there was no evidence on the influence of bilingualism on the working memory. 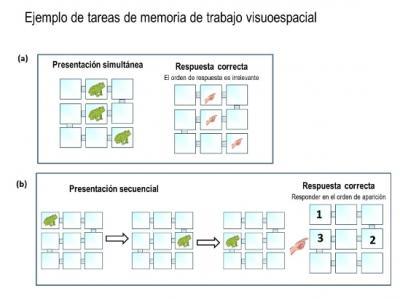 (a). A more simple task: children were shown a series of stimuli (frogs) that simultaneously appeared in different points of the screen. When the frogs disappeared, children had to remember the places where they had appeared.(b) The most complex task: stimuli were separetely displayed and children had to remember the place and order on which they had appeared, which is highly demanding in cognitive terms.

According to the researcher, the results of this study "contribute to the growing number of studies on the role of experience in cognitive development". Other studies have demonstrated that children performing activities such as music education have better cognitive capacities. "However, we cannot determine to what extent children perform these activities due to other factors such as talent or personal interest".

"However, the children in our study were bilingual because of family reasons rather than because of an interest in languages.